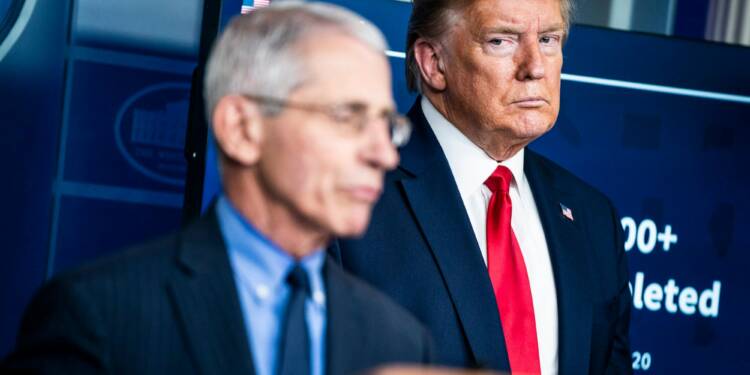 The explosive details of the American deep state’s collusion and coverup alongside the Chinese Communist Party have now been exposed. For over a year now, former President Donald Trump has been saying it regularly that there is no doubt of the Sars-Cov-2 (the virus causing Covid-19) having possibly leaked from a laboratory at the Wuhan Institute of Virology. While he was President, Donald Trump was termed a ‘racist xenophobic bigot’ for calling the virulent strain what it was – a “Chinese virus”. Trump has now been proven right, and the American mainstream media too is reporting how the virus seems to have been artificially engineered.

According to an explosive investigation by Vanity Fair, and according to thousands of pages of emails of Dr Anthony Fauci accessed by Buzzfeed – the great grand deep state collusion for the purpose of covering up the artificial origins of Covid-19 has now come out in the open. And individuals like Dr Fauci, Peter Daszak, Dr Francis Collins lie at the centre of this massive and shameful coverup. Dr Fauci was warned, at the very beginning of the outbreak, that Sars-Cov-2 could very well have originated from a Chinese lab and not some wet market of Wuhan.

Despite being warned of the possibility – and despite actively acknowledging the same in private emails with the director of National Institutes of Health Dr Francis Collins, Fauci continued publicly denying the mere possibility of Covid-19 being an engineered disease. He even ranted against then President Donald Trump for claiming openly that the virus was not natural and calling the outbreak a “Chinese pandemic”.

Tearing into Fauci for the extravagant email chain which has exposed the director of the U.S. National Institute of Allergy and Infectious Diseases and the chief medical advisor to Joe Biden as a CCP stooge, Donald Trump in a statement said, “After seeing the emails, our Country is fortunate I didn’t do what Dr Fauci wanted me to do. For instance, I closed our Borders to China very early despite his not wanting them closed. The Democrats and the Fake News Media even called me a ‘xenophobe.’ In the end, we saw this was a life-saving decision, and likewise with closing our borders to Europe, specifically to certain heavily infected countries.”

The former president, who has now been vindicated, added, “Now everyone, even the so-called ‘enemy,’ are beginning to say that President Trump was right about the China Virus coming from the Wuhan Lab. The correspondence between Dr Fauci and China speaks too loudly for anyone to ignore. China should pay Ten Trillion Dollars to America, and the World, for the death and destruction they have caused!”

But covering up the true origins of the novel Coronavirus really became a necessity for the deep state. After all, their own bottoms were on the line here. In its explosive report, Vanity Fair has exposed how the United States of America funded the very research at the Wuhan Institute of Virology from 2014 which has now come under the radar for being the possible source of the unprecedented outbreak.

For dismissing the possibility of the virus had originated from a Chinese laboratory in Wuhan, Dr Fauci received a “personal thank you” from the head of a non-profit that used a $3.4 million government (NIH) grant to fund research at the Wuhan Institute of Virology. EcoHealth Alliance, headed by Peter Daszak used its NIH grant to study coronaviruses in Chinese bats and sent the Wuhan lab $600,000 from 2014.

The American funding of the Wuhan laboratory started in 2014 – under Barack Obama, and was brought to a screeching halt by President Donald Trump in April 2020 – as soon as he was apprised of the fact that American dollars have been flowing to an institute in China from which the outbreak possibly originated.

Read More: Democrat friendly media is suddenly parroting Trump’s line about Covid origins. Are they trying to save Dr Fauci?

That’s not all. The rot runs very deep. In July last year, the World Health Organisation invited the U.S. government to recommend experts for a fact-finding mission to Wuhan which would later absolve the Chinese of all culpability. Three names were suggested by the U.S. government: an FDA veterinarian, a CDC epidemiologist, and an NIAID virologist. Guess who was chosen for the fact-finding mission? None of the three suggested experts! Instead, Peter Daszak, who had been funding the research at the Wuhan Institute of Virology since 2014, was made a part of the WHO mission to China.

The American deep state, in cahoots with mainstream media, tried and were successful at burying the notion of Coronavirus having been made to escape a lab in Wuhan. Any authoritative person who suggested that the theory was not superficial and full of lies was subjected to threats, shadow banning and unprecedented hounding. Take former CDC director Robert Redfield, for instance. Redfield told Vanity Fair he received death threats from fellow scientists after telling CNN that he believed COVID-19 had originated in a lab. He said, “I was threatened and ostracized because I proposed another hypothesis…I expected it from politicians. I didn’t expect it from science.”

In fact, mainstream media was reluctant to pursue this story so far. Only after Vanity Fair – an entertainment publication decided to investigate the sequence of events did the proverbial s*it hit the fan among American media – and now, every media organisation is behaving as though they have been the biggest proponents of the lab theory since last year.

Read more: Is there a secret understanding between Biden Administration and the CCP over the “lab leak theory”?

The fact is that everyone knew the truth. Yet, they could not report on it, since Donald Trump was in power last year. He has been saying for the longest possible time that the virus has artificial Chinese origins and has perhaps been engineered. His claims were dismissed as racist, because pursuing the story would lead American media houses to the inevitable truth which has only now tumbled out, and in which the American deep state has been caught to be in bed with the CCP.

Had Trump’s claims been proven earlier, he would get a massive pre-electoral boost and return as President. So, to prevent that from happening, the media, Democrats and the deep state colluded with the CCP to cover up the actual origins of the virus. The American people and the world have been lied to, and as Trump has said, China must be made to pay trillions of dollars to the world community for the damages caused.