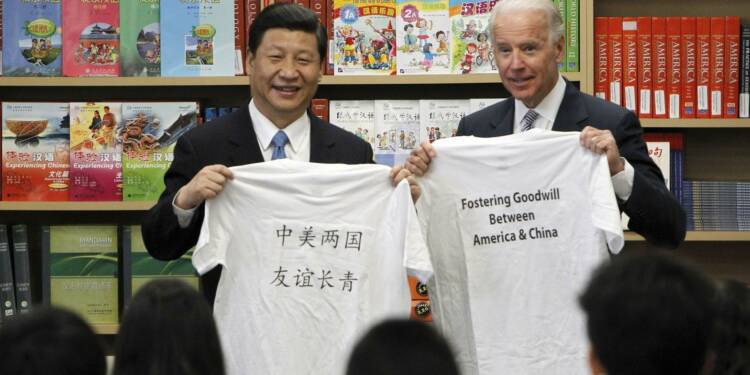 For the first time in his Presidential tenure which is already more than a hundred days old, US President Joe Biden has taken a tough stance on China. Now, whenever a foreign state head or even an international organisation has accused China of hiding the Covid-19 origin or have suggested that the virus originated in a lab in China, Chinese politicians, spokespersons and state media alike have torn up those claims ruthlessly using language not worthy of a diplomatic approach.

But now that the Biden administration is using the same rhetoric against China, the response, some might say have been muted and subdued. There are no lengthy tirades and counter accusations by the Chinese embassy, nor are there insulting tweets by people high up in the Chinese Communist Party ranting against the vile US administration.

Though, there have been accusations that Biden is accusing China to garner political support domestically, and also the common rhetoric of pulling shade on the US intelligence community which has been tasked with putting the report on the Covid-19 origin on the President’s desk in 90 days.

Former President Donald Trump had also accused China of creating the virus responsible for Covid-19 at a lab in Wuhan. From China’s ambassador to the United States to even lowly personnel in the CCP had slammed Trump for his statements. The Global Times flooded degenerative articles on Trump accusing him and the US of the virus and some accusations were even personal.

At the time the Chinese ambassador to the United States had said, “We have to base ourselves on real facts, and … the timeline is very clear,” Ambassador Cui Tiankai said. “Everybody knew [early on] this is very dangerous.” “As soon as we discovered something, we shared it with the international community. This is a fact,” he insisted. “Everything was done very quickly.”

Trump repeatedly called COVID-19 the “China virus” or “Chinese flu,” insisting the Chinese government is “fully responsible for concealing the virus and unleashing it upon the world,” as he kept reiterating it and now the Biden administration is doing the same.

To which the Chinese ambassador had responded, “It’s certainly wrong to have such stigma.” He said, “The virus, as defined by the World Health Organization, is COVID-19. And the WHO has ruled that the name of any such virus should not be linked with any particular place, people, or ethnic group. … This is an international rule I think all of us should follow.”

But now that the Biden administration is doing the same, the Chinese embassy released a very generic statement, seemingly unconcerned about the accusations made by a sitting US President. After Biden ordered intelligence to “redouble” their efforts to determine the origins of coronavirus, the Chinese Embassy in the United States issued a statement saying that China supports a comprehensive study of all early cases of COVID-19 found worldwide, as well as a thorough investigation into some secret bases and biological labs around the world.

This has been a very calm and collective statement from the Chinese embassy in the face of new accusations.
This is not just one example of the change in Chinese tunes in the face of accusations of concealment of data. For example, when Australia pushed for an open and independent inquiry into Wuhan concerning the origin of the breakout, China had slammed Australia and tried to punish it via a unilateral trade war. While the trade war backfired and China was forced to suffer the consequences of its actions, but this just shows the way China has reacted when it has been accused of such claims.

Another example, which can be seen, is the fallout between the European Union and China. China and the EU signed a comprehensive big money investment treaty just before the Biden administration ushered in the White House. However, now that the EU has been pushing Chinese nerves on Covid-19 origin and Xinjiang, there has been massive fallout. A fallout of the scale that talks over the investment deal have been put on ice, and lest we forget, this investment deal is crucially important to China’s economy which has slumped and stagnated over recent years due to the failure of BRI and other massive projects.

Read More: Spare the rod and spoil the child: Biden’s kid-glove treatment of China has begun biting America back

Another important point of note is the timing of these accusations by the Biden administration. Since even before the US Presidential elections, Joe Biden and the Democrats have scoffed at the mere possibility that the virus originated at any lab in Wuhan. Even after assuming office and getting thrashed by Chinese diplomats at Alaska, the Biden administration, though, pressed China on Covid but did not do so as vehemently as it is doing now.
The only change in circumstance is that Dr Anthony Fauci has now been cornered by and is being accused of hiding information that could have had helped in pinpointing the origin of the virus. Now that Fauci put his weight behind the lab-leak theory to get out of the hole he dug himself in the Biden administration has armed full-blown anti-China rhetoric. To save one of their own? Quite possibly so. And maybe the same has been reported to the CCP headquarters in Beijing which could have been the reason for the absence of any strong anti-rhetoric against the United States. Could this mean that the Biden administration has a secret understanding with Beijing to fuel its own domestic political ambitions? It certainly looks like it more and more as Biden knows that accusing China will give him the bipartisan support he so clearly lacks at the moment.