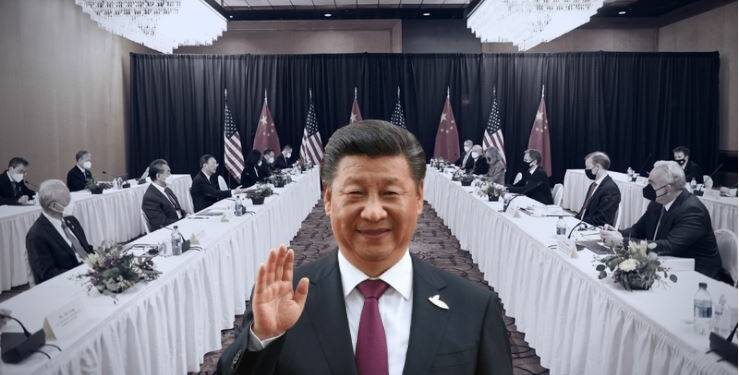 In international relations and geopolitical interaction, there is rarely any action by any party that is not planned. Therefore for a while, many were contemplating what did Chinese Communist Party gain by making humiliating and borderline scolding statements during the summit in Alaska with their American counterparts. Although the analysts were looking for answers in the geopolitical domain, the answer lies in the Chinese domestic political situation.

China is an autocracy of Communists, and in such a system their legitimacy revolves around the party’s ability to sustain a large acceptance of the communist party among the citizen of the country in the discussion. In this case, the Chinese Communist Party’s fast depreciating popularity and even acceptance among the Chinese people have become a major concern for the CCP. This is why the party is making multiple attempts to capitalize on fed nationalism. And the act of humiliating the American delegation was part of the effort by Xi Jinping and CCP to garner support and acceptance among the Chinese population.

About 375 million Chinese have left the CCP and its allied organisations, indicating that the Chinese government is on the verge of collapsing. The CCP which is on the verge of a crisis has again raised the banner of nationalism in order to save itself. The coming of Joe Biden and his weak leadership provided a very convenient option for the CCP to rally domestic support.

During the Alaska meeting when national security adviser Jake Sullivan tried to corner China for undertaking an “assault on basic freedoms”, but diluted the same with a rider like, “We do not seek conflict but we welcome stiff competition,” the Chinese realised that they were up against a defeatist Biden administration. So, Yang responded angrily by demanding that the U.S. stop pushing its own version of democracy at a time when it is itself roiled by domestic discontent. He also accused the U.S. of failing to deal with its own human rights problems and took issue with what he said was “condescension” from Blinken, Sullivan and other U.S. officials.

Yang Jiechen ‘scolded’ the United States, in turn, for its own dismal state of democracy, saying, “We believe that it is important for the United States to change its own image and to stop advancing its own democracy in the rest of the world…Many people within the United States actually have little confidence in the democracy of the United States.” He added, “There is no way to strangle China.” Caught by surprise with the unprecedented aggression being mounted by China, U.S. representatives, particularly Antony Blinken, were seen going hysterical with their body language, as they simply could not contain their inherent fear of China.

Yang’s words were for the Chinese to hear, in order to intensify a new wave of anti-US sentiment among domestic Little Pinks (a pejorative term to describe youths indoctrinated by the Chinese regime). Yang’s performance was also for the head of the CCP Xi Jinping.

Another example of riling up domestic popular opinion in favour of the CCP was visible as we saw a country-wide boycott of the western brands. In the middle of the political impasse, the Communist Youth League (CYL) Central Committee weighed in to launch a ferocious boycott of foreign imports, with the CCP’s official mouthpieces inciting nationalist sentiment in the process.

Taken together, this incident demonstrates that Wang Huning, a new member of the CCP’s Politburo Standing Committee, dominates not just the CYL but also the CCP’s Publicity Department, and using the official media as one of his weapons, is operating behind the scenes to manipulate the diplomatic structure.

The existence of Communist China and the risks for its existence are the same, that is the Chinese people. If the people do not have a belief in the party, then the party loses its legitimacy and becomes weaker. This is something the Chinese Communist Party has been most scared of. And given the recent developments, the CCP has become even more concerned and doing everything to whip up nationalism within China.

To take down Florida governor DeSantis and please its Democrat handlers, CBS has come up with a heavily edited video clip