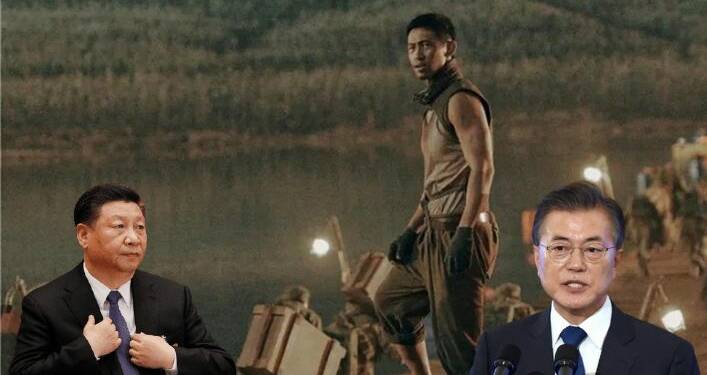 The Moon Jae-in administration in South Korea is under fire from the public for its extreme Sinophilia. Seoul is being overrun by rising anti-Chinese sentiment in South Korea. The prospect of Moon Jae-in in the elections next year are really grim and going ahead if it continues its pro-China policies, his party’s prospects will be further diluted. Due to this pressure, and increasing hate among South Koreans for CCP, the Moon administration banned the Chinese film, “The Sacrifice.” And to gauge the geopolitical significance of the move, one must remember that Chinese Foreign Minister Wang Yi is scheduled to visit South Korea.

“The Sacrifice,” a Chinese film, depicts Chinese soldiers attempting to repair a bridge while under fire from South Korean and American troops during one of the most difficult periods of the Korean War. The film was a tremendous blockbuster in China when it was released in 2020, but it received a far different reception in South Korea this week ahead of its planned distribution on streaming platforms. Politicians and internet users were outraged that the film was allowed to be screened in the country since it depicts a fight that killed thousands of South Koreans.

Public resentment and the aftermath

During a session of the National Assembly on Sept. 8, Culture Minister Hwang Hee announced that the film had been removed and will not be released in South Korea. Hwang would not say whether the film’s distributors or the government had pulled the plug, but he did allude to rising anti-China sentiment in South Korea, particularly among the youth.

This rising anti-China attitude complicates an already tense relationship, and it may cloud meetings between Chinese Foreign Minister Wang Yi and his South Korean counterpart Chung Eui-yong on Tuesday in Seoul. Sisain, a current affairs magazine, and pollster Hankook Research revealed survey results in June that show a deterioration in South Korean public attitude toward China, particularly among the young. Only 26% of respondents felt positive about China, compared to 57% who felt positively about the United States. With 28 per cent, even South Korea’s traditional foe, Japan, came out ahead of China.

Given the pushback against Chinese influence, a tourist-focused tourist project in South Korea’s eastern Gangwon province has been scrapped. The project was being described as the “Chinatown” project by its opponents. The “Chinatown” project, officially called the Korea-China Culture Town, was slated to be completed by 2022. It was supposed to be 10 times larger than the Chinatown area of Incheon. As such, the project represented the Moon administration’s desire to improve ties with Seoul’s old rival- the People’s Republic of China. However, Koreans never really accepted it.

In fact, some 500,000 South Koreans petitioned their government to cancel the tourist attraction, which planned to showcase Chinese culture. The Korea Times had at that time reported, “An online petition has been filed on the Cheong Wa Dae website recently, calling for an end to the ongoing construction of a Chinatown and Legoland in Chuncheon, Gangwon Province.”

China appears eager to draw South Korea, a close ally of the United States, deeper into its sphere of influence, while the Moon administration has tried to strike a balance between Beijing and Washington by employing a strategy known as “strategic ambiguity,” in which Seoul avoids appearing to favour one superpower over the other.

Much of Korean history has been marked by the country’s encounters with more powerful neighbours, and some South Koreans are concerned that China would try to impose its will. And thus, any attempt to impose its cultural superiority results in a consolidated outburst of the South Korean people, and this is exactly what is happening currently. The increasing anger has made the already cornered government of Moon Jae-in to ban the Chinese film, Sacrifice.