‘Idiot, sabotaged my trade negotiations with China,’ Trump rips into General Mark Milley for having covert links with China 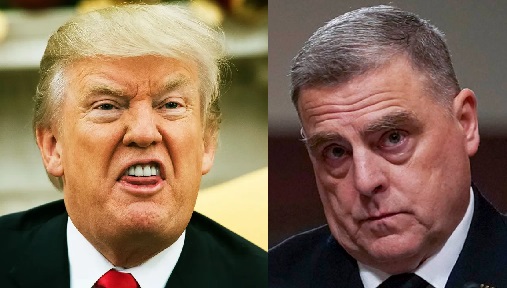 Donald Trump has taken Gen. Mark Milley, the United States’ chairman of the Joint Chiefs of Staff to the cleaners. Mark Milley, the liberal lunatic who should be anything but a U.S. military general, has now been accused by the former President of derailing his trade negotiations with China, and also creating false hysteria of an imminent attack on the Communist nation by the Trump administration. According to the Washington Post, the top US general discreetly called his Chinese counterpart twice over concerns that the then-President Donald Trump could ‘launch a conflict with China’ as his election loss loomed, and in the aftermath.

Now, in a fiery statement in which Trump refers to Milley as an ‘idiot’, it has been alleged that the chairman of the Joint Chiefs of Staff played a big role in trying to make the going easy for China in its dealings with the Trump administration. The statement says, “After many years of allowing China to rip off the United States on trade and so much else, I was very tough on China, by far the toughest of any U.S. President in history…For Lightweight General Mark Milley to have called the Chinese to ‘bring down the temperature’ of my negotiations with them, negotiations that were having a major positive impact on large-scale benefits to the United States, is outrageous.”

Donald Trump further remarked, “We were never going to make any military moves – never even thought of it, but we were hitting them hard in so many other ways…Milley is an idiot with no common sense or ability to negotiate—that’s why he left $85 Billion of the World’s best Military equipment in the hands of the Taliban for no reason whatsoever. That’s also why 13 young Warriors are not with their families tonight.”

"After many years of allowing China to rip off the United States on trade and so much else, I was very tough on China, by far the toughest of any U.S. President in history…For Lightweight General Mark Milley to have called the Chinese… pic.twitter.com/8VlU40nLNA

In the aftermath of the Kabul airport bombings, which led to the death of 13 active U.S. military servicemen just when they thought they would begin a new life back home, Joe Biden had vowed retribution. So, he ordered an ill-planned and disastrous drone strike which was intended to target ISIS-K operatives, but instead, ended up killing an aid worker and up to nine of his family members, including seven children.

Gen. Mark Milley, defending his master Joe Biden, said, “At this point, we think that the procedures were correctly followed and it was a righteous strike.”

On October 30, 2020, just four days after the presidential election, US General Mark Milley called General Li Zuocheng of the People’s Liberation Army. Again, on January 8, two days after the violent riot at the US Capitol, Gen.  Mark Milley had a conversation with Gen. Li Zuocheng. Milley sought to reassure Li that the US was stable and would not attack China and if a conflict were to occur, he would notify his counterpart ahead of time.

Given Milley’s rather brazen inclinations towards China, it is not entirely impossible that the top General discounted the Trump administration’s efforts to tame China, by providing Beijing with classified intel and critical information regarding the former President’s plans.

Meanwhile, former acting Secretary of Defense Christopher Miller, who led the Pentagon from the period after the 2020 election through Inauguration Day, said that he “did not and would not ever authorize” Gen. Mark Milley to have ‘secret’ calls with his Chinese counterpart, describing the allegations as a “disgraceful and unprecedented act of insubordination”, and calling on him to resign “immediately”.

The United States of America is really getting compromised from within. China seems to be buying the topmost leaders of the country. While Joe Biden continues sleeping over the immediate dangers faced by the USA, people like Mark Milley are breaking the country’s fort from within. If Milley could not keep his love for China in his pants during the Trump presidency, there is no way he is about to do so now, under the sleazy leadership of Joe Biden.