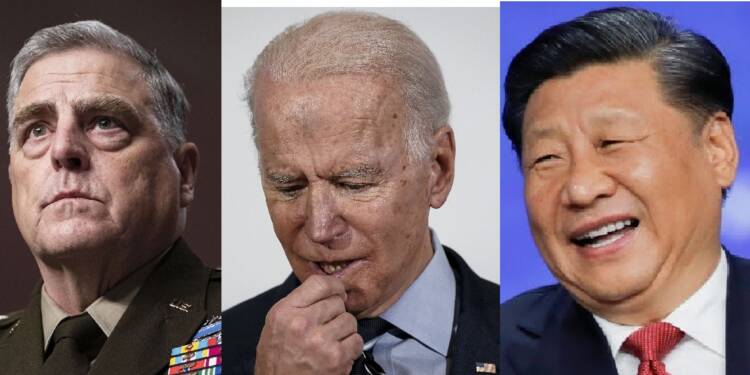 If you were under the impression that the top general of the USA answering the beck and call of Joe Biden was a bad showing, then wait for the latest revelations. According to the Washington Post, the top US general discreetly called his Chinese counterpart twice over concerns that then-President Donald Trump could launch a conflict with China as his election loss loomed and in the aftermath. The fact that the general was willing to collaborate with the very country which wants the worst for the USA shows the sheer magnitude of the alliance with the Chinese Communist Party.

General Milley in Cahoots with China

Milley sought to reassure Li that the US was stable and would not attack China and if a conflict were to occur, he would notify his counterpart ahead of time, according to the article. The report was based on Bob Woodward and Robert Costa’s forthcoming book, ‘Peril‘, which revolves around interviews with 200 informants.

“I do not need to tell you the dangers posed by senior military officers leaking classified information on U.S. military operations, but I will underscore that such subversion undermines the President’s ability to negotiate and leverage one of this nation’s instruments of national power in his interactions with foreign nations,” Rubio said in a letter to Biden.

The Washington Post reported that Milley was motivated to contact Beijing the second time in part due to a Jan. 8 call with U.S. House of Representatives Speaker Nancy Pelosi, who had asked the general what safeguards were in place to prevent an “unstable president” from launching a nuclear strike. “He’s crazy. You know he’s crazy,” Pelosi told Milley, the news portal reported, citing a transcript of the call. According to the cited call transcript, the general replied, “I agree with you on everything.”

US Military Chief’s controversial past actions

Gen. Mark Milley has stated repeatedly that he wants the military to stay out of politics. Milley received harsh criticism a year ago when he went across Lafayette Square outside the White House with Trump for a photo-op after federal officials violently removed the area of racial-injustice protesters. The same general was chastised by conservatives last week after dismissing ‘offensive’ GOP senators’ depiction of military commanders as ‘woke‘ for investigating the origins of racism.

Read more: ‘Toe my lines or face my wrath,’ Biden has turned the US Military Chief into a puppet

Retired Gen. Joseph Dunford, Milley’s predecessor, said, “Gen. Milley did all he can do to adapt to President Trump and appropriately serve the president,” Dunford continued. “Now, Gen. Milley is doing that for President Biden.” This was said after Milley became the target of the right-wing and ex-president Donald Trump. These current and retired officials have revealed that Milley is under a lot of pressure and even criticised him for politicising the military. However, this just shows that the pressure is so immense under the Biden administration to follow the woke agenda that even army generals are being forced to take a partisan stand.

The USA has been at the helm of affairs for a very long time and as things are going, it seems like it has become its own worst enemy. It is not a hidden fact that ‘wokeness‘ is an ideological inclination and is based on the metamorphosis of the concepts of ‘Marxism’ and ‘Post-modernism,’ and it being the way it is, no one can deny its political nature. However, under the influence of Democrats, the US Military is turning into a woke parody of its previous strong self.

In response to the allegations levied on General Milley, Trump, in a statement, said that if the story was true, Milley should be tried for treason. “For the record, I never even thought of attacking China,” Trump said.

Defence Secretary Lloyd Austin and General Mark Milley have been asked to resign by hundreds of former generals and admirals for “negligence in fulfilling their duties, especially including events surrounding the disastrous withdrawal from Afghanistan.” And now it looks like that the only answer is to do what Donald Trump has proposed.