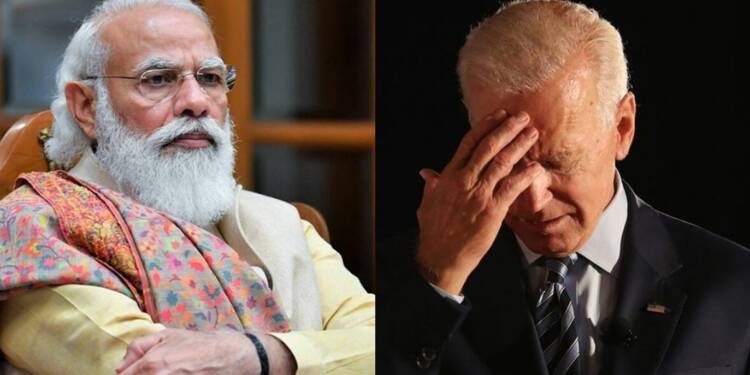 India under Narendra Modi has come a long way and is now a highly significant global power which is now capable of shaping and altering the flow of geopolitics. This fact has come out in full view as Indian Prime Minister Narendra Modi is fixing the mess Joe Biden has created among its allies by splitting the forces which intend to counter increasing Chinese belligerent activities. By excluding France from the deliberations of the AUKUS deal and taking significant decisions for Indo-pacific without taking France into confidence has infuriated the country and it started a geopolitical whirlpool.

In such a scenario, India has come out to save Joe Biden’s botched up AUKUS implementation that had just about handed over a significant diplomatic victory to China. According to the French foreign ministry, France’s foreign affairs minister has agreed to collaborate with his Indian counterpart on a programme to foster “a truly multilateral international order.” During their call, Jean-Yves Le Drian and Subrahmanyam Jaishankar also agreed to strengthen their strategic alliance, which is “based on a relationship of political trust between two large sovereign states of the Indo-Pacific,” according to the ministry.

France is not a tad bit happy with Australia and the US and has termed the AUKUS initiative a grave betrayal and something which should not have happened among allies and partners. It has also gone on to suggest that the AUKUS initiative will have a profound impact on its participation at NATO. Australia was supposed to procure several diesel-powered submarines from France as a part of a multibillion-dollar deal that has been in the works for years now. France claims it was blindsided by the US and Australia.

The French Foreign Minister called the deal a “unilateral, brutal and unpredictable decision”. While speaking to radio station Franceinfo, Le Drian said that it was a “stab in the back” and added that France had established a relationship of trust with Australia, and it has now been “betrayed”.

If seen in the context of the larger goal of containing the Chinese threat and securing the Indo-Pacific, the announcement of a trilateral security arrangement called AUKUS between Australia, the United Kingdom and the United States is indeed historic. However, the countries could have handled it all better. France is currently infuriated with all three of its allies and partners – the U.S., UK, and Australia and as a result, it has recalled its ambassadors from all three countries who have been the closest allies of France for the longest time. India and Japan too will not be very happy with two QUAD members setting up a trilateral security arrangement, alongside the UK, with the goal of containing China.

The Five Eyes alliance is in any case suffering a lull of late. In such an atmosphere, things could have indeed been done differently. Australia could have been given the nuclear propulsion technology by the United States via the Quad arrangement itself. In fact, France could have been made an observer at Quad, giving the alliance more teeth against China, given Paris’ deep involvement and stake across the Indo Pacific.

India comes as the saviour

The phone call between Indian and French Foreign Ministers came a day after the French government recalled its ambassadors to the United States and Australia after Canberra ditched a multibillion-dollar order for French submarines in favour of a partnership with Washington and London in the Indo-Pacific region. Even a layman can decipher that these actions are in a way meant to pacify a disgruntled France and repair the damage of Joe Biden’s implication of AUKUS.

The Indian Air Force (IAF) has inked a contract to purchase phased out French Air Force Mirage-2000 fighter aircraft, which will aid in the maintenance of its fleet. This is the second such arrangement that the Indian Air Force has signed for the purchase of approved airframes, allowing one of the most powerful aircraft fleets to remain in service for longer. “Some time ago, a squadron of French Mirage jets was phased out. On August 31, a contract was struck to acquire these phased-out planes in order to increase parts and airframe capabilities for the about 50 Mirage-2000s in the Indian fleet, according to government sources.

These developments are in line with the intentions of Narendra Modi who wants to make sure that the global congregation of like-minded countries do not splinter away and can work together to efficiently contain China.

With his pointless sanctions on Ethiopia, Biden has ceded the Horn of Africa to Russia