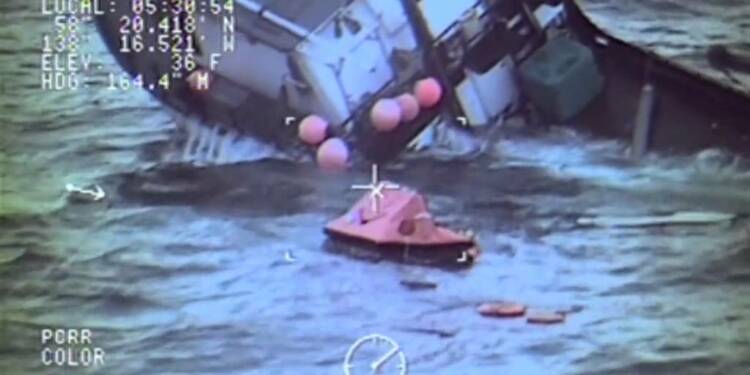 Alaskan Crab Boat Sinks – Two survivors, Dean Gribble Jr. from Edmonds and Jon Lawler of Anchorage, recalled details of the night including how they were driven off the boat by large waves. Barcott said that five crew members died in the sinking of the Scandies Rose, including boat owner and captain Gary Cobban Jr., 60, and his son David Cobban, 30. Their family also received other insurance proceeds which was not part of the settlement. Other dead crew members were boat engineer Art Ganacias, 50; Brock Rainey, 47; and Seth Sorin and Rousseau Gano, 31.

Gary Knagin of Kodiak, Alaska, the brother of boat captain Gary Cobban Jr. said The Associated Press he did not believe that all five crew members would be found alive. Despite the article’s contents, the names of the men rescued and five missing crew members were not published until KHQA identified one of the missing as Brock Rainey Kellogg of Idaho.

The coast guard has suspended its 20-hour search for five missing crew members after the 130-foot Alaskan crab boat Scandies Rose sank on New Year eve off Sutwik Island, Alaska just before 10 p.m. The coast guard said it has used helicopters, planes and boats to search for 20 hours for the missing crew member and ended the search late Wednesday because they were unlikely to survive. Scandie Rising Master Gary Cobban Jr., his son David Lee Cobban, Arthur Ganacias, Brock Rainey and Seth Rousseau-Gano were missing.

The Coast Guard’s Marine Board of Investigation, a high-level investigation into the accident, is expected to include testimony from the co-owner of the ship, two survivors, a former crew member, a naval architect and those involved in repairs. On the night of December31, 2019 a Mayday broadcast of Scandies Rose, a Washington-owned crab boat was broadcast live on Monday morning and the Coast Guard launched a two-week public hearing to investigate the sinking that killed five of the seven crew members.

The Coast Guard’s Marine Board of Investigations investigation report is expected to identify probable causes of the sinking, which killed five of the seven crew members, and make recommendations for improved safety in the Alaska fleet before the winter harvest of snow and king crabs. At a public hearing later in the day at the Edmond Center for the Arts, the two survivors of the Scandie Rose and Washington who managed the crab boat will also testify.

Settlement for the loss suffered for Alaskan Crab Boat Sinks

An agreement between the owners of the Scandies Rose crab boat from Seattle and Bremerton and the survivors and families of the four crew members who died when the ship sank on December 31 in the Gulf of Alaska has been reached. The settlement of more than $9 million was confirmed by Michael Barcott, a lawyer representing two surviving crew members and families of four of the five men that died when the Washington-managed crab boat sank on December 30. Alaskan Managed, the company that managed the boat, said the money was funded by insurance. Lawyers involved in the case said how the money would be divided among the families and victims of the victims and crew would be decided in court.

Barcott said documents slapping the settlement will be filed in U.S. District Court in Tacoma on Monday. The settlement of over $9 million is subject to review by the State Supreme Court and how the money is divided among survivors and families of the deceased remains under discussion, said Michael Barcott, a lawyer representing the owners of Washington and Alaska. He said the settlement is financed by insurance companies. Documents revealing the $8.5 million settlement are scheduled to be filed Monday in U.S. District Court in Tacoma, according to Barcott.

After effects of the sinking of ‘Ship’

Five commercial fishermen are believed to have died on New Year’s Eve when their crab ship sank in the Gulf of Alaska, the U.S. Coast Guard said at the end of a search and rescue operation in high winds and rough seas. Rescuers battled high seas, freezing temperatures and poor visibility to rescue two crew members who had taken refuge in a lifeboat and survived the sinking. The men said they faced a 6-foot-long lake, wind speeds of 40 miles per hour and icy conditions.