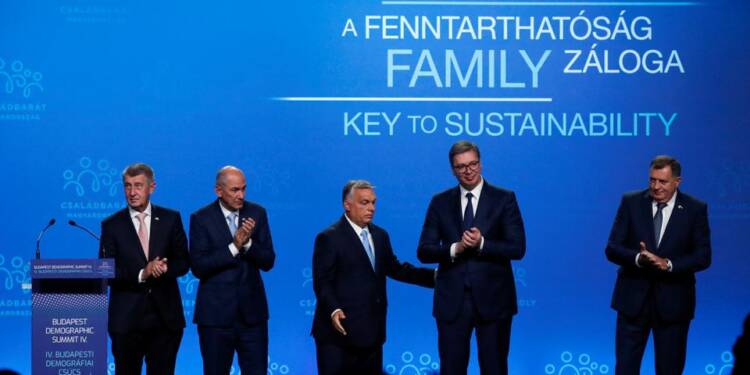 Central and Eastern European nations have now risen in protest against the EU’s lax immigration policies. They have, in fact, given an ultimatum to the Brussels-based intergovernmental bloc – stop migration from conflict-ridden Muslim nations or face the threat of disintegration.

The comments against immigration were made in a joint statement by the leaders of the Czech Republic, Hungary, Poland, Serbia, and Slovenia during the Budapest Demographic Summit. Except Serbia, all the countries which joined the Budapest Demographic Summit are EU members which speaks volumes of how the bold remarks made at the summit are actually a message to Brussels.

The leaders of the six Central and Eastern European nations attending the Budapest Demographic Summit were quite clear about one thing – bolstering immigration isn’t the answer to European Union‘s declining population and birth rates.

The joint statement read, “Increasing the number of European children is essential to preserving Europe’s Christian culture and other religious traditions for future generations.” It added, “Migration should not be seen as the main tool to tackle demographic challenges.”

Hungary’s Prime Minister Viktor Orban and the Czech Republic’s Prime Minister Andrej Babis, have to go to elections in the coming months and therefore they have been pushing a strong anti-immigration agenda to whip up favourable sentiment. Babis told the Budapest Demographic Summit that due to the influx of immigrants, “the only sustainable solution against the extinction of Europe is to increase the birth rate.”

Apart from Hungary and Czech Republic, Poland is already known for its strong anti-immigration policy, as against the general European tendency to encourage immigration from conflict-hit regions.

Poland’s Prime Minister Mateusz Morawiecki recently has argued against taking the additional burden of Afghan refugees on top of a massive number of African refugees seeking asylum in Europe.

What Central and Eastern European nations are worried about is the changing identity and culture of Europe. There are two main factors at play – firstly, Western European powers that control the EU are pushing for lax immigration policies. And secondly, Europe’s own population is on a rapid decline.

In 2019, Europe’s birth rate stood at 1.53 live births per woman, which is far below the 2.1 mark required to avert a population decline. In 2015, the EU recorded more deaths than births for the first time, yet the EU’s population still grew due to the influx of refugees and other immigrants from conflict-hit regions like Syria and Northern Africa.

An official EU website corroborates such statistics about the decline of Europe’s population. The website states, “In the EU as a whole, the composition of our households is changing – households composed of two parents with children are being joined by households consisting of people living alone, single parents or couples without children.”

What the EU website doesn’t seem to have considered is the increasing threat of destabilization in sensitive regions like the Middle East or North Africa, which might trigger greater immigration into Europe. And ultimately, the European community might become a minority in Europe itself.

So, while Europe’s own population is on the decline, the immigrants are fast filling in the shrinking population. The Central and Eastern European nations visualise this as a decline of the Continent’s Christian identity. And this is the main point of division between Eastern Europe and Western Europe. If Brussels doesn’t rectify this issue immediately, we are practically looking at total disintegration of the European Union.