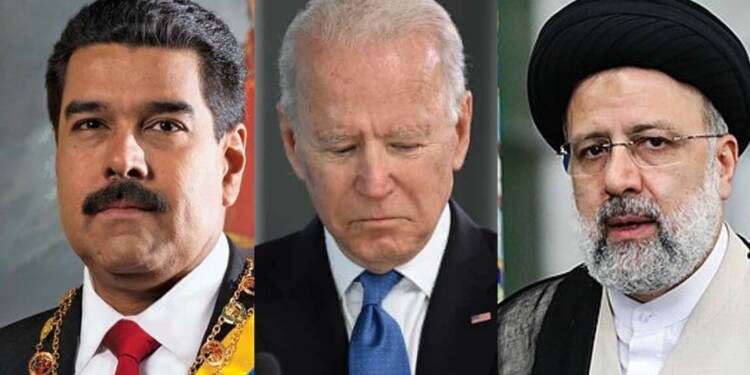 If one tries to encapsulate the whole turns of events for a year or so, the fall of the USA from the position of the unipolar world leader to something of a lower standing becomes apparent. The situation of the US under Joe Biden is so weak geopolitically, that countries like Iran and Venezuela are defying the US sanctions and coming together by signing an oil export agreement. Five people familiar with the deal told Reuters that, Venezuela has agreed to a significant contract to swap its heavy oil for Iranian condensate, which it may use to improve the quality of its tar-like crude. The first cargoes are expected this week.

According to insiders, the arrangement between state-run businesses Petroleos de Venezuela (PDVSA) and National Iranian Oil Company (NIOC) deepens collaboration between two of Washington’s rivals as the South American country strives to increase its faltering oil exports in the face of US sanctions. According to one of the persons, the exchange agreement’s initial phase is set to last six months, although it could be extended. Other details of the impact were not immediately available to Reuters. Venezuela’s and Iran’s oil ministries, as well as state-owned PDVSA and NIOC, did not respond to calls for comment by Reuters, but the indications are sufficient to prove how both these countries are defying US sanctions.

Earlier indications of the increasing closeness

According to Politico, the Biden administration late May, had advised Venezuela and Cuba not to allow two Iranian naval ships crossing the Atlantic, thought to be transporting weapons, to dock at their ports. Iran dispatched two Navy boats to the Western hemisphere. And an Iranian official confirmed the destination as Venezuela on June 1. According to an armaments pact signed last year, the vessels could be delivering missiles and potentially speed boats to Venezuela.

Meanwhile, according to two additional sources familiar with the issue, Caracas attempted to use the crisis to get relief from US sanctions imposed by the Trump administration. Venezuelan officials were told by US intermediaries that allowing the ships to land there would make it less likely that the US will lift sanctions against the country.

Under U.S. sanctions, Iran and Venezuela strike an oil export deal. According to a Treasury Department memo to Reuters citing US government orders that create the punitive measures, the deal could be a violation of US sanctions on both countries.

Penalties programmes in the United States not only prohibit Americans from doing business with Iran’s and Venezuela’s oil sectors but also threaten to impose “secondary sanctions” on any non-US person or company that transacts with either country’s oil corporations. Secondary sanctions might include restrictions on access to the US financial system, fines, and the freezing of US assets.

Read more: Venezuela bullies the US as it hosts Iranian warships

In response to a question regarding the purchase, the Treasury Department warned that any “transactions with NIOC by non-U.S. persons are normally subject to secondary sanctions.” It also stated that it “retains authority to impose sanctions on any person determined to act in the oil sector of the Venezuelan economy,” but did not specify if the current agreement constituted a breach of sanctions.

According to Reuters, PDVSA aims to blend Iranian condensate with extra-heavy oil to generate diluted crude oil, a grade required by Asian refiners that it has struggled to export since late 2019 when diluent imports were blocked owing to sanctions. There are multiple areas of convergence between Venezuela and Iran, but the fact that they are now able to sign pacts in open shows how weak the US under the Biden administration has become.

CCP fears its hostage diplomacy could invite people’s wrath, so it has censored the news of release of two Michaels