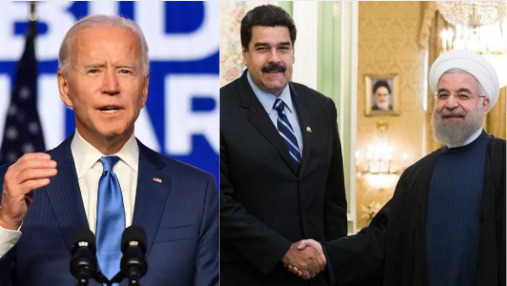 According to Politico, the Biden administration has advised Venezuela and Cuba not to allow two Iranian naval ships crossing the Atlantic, thought to be transporting weapons, to dock at their ports. Iran dispatched two Navy boats to the Western hemisphere in May, as per TFIGlobal, and an Iranian official confirmed the destination as Venezuela on June 1. According to an armaments pact signed last year, the vessels could be delivering missiles and potentially speed boats to Venezuela.

Iran has routinely threatened the US Navy in the Persian Gulf, sending armed fast boats within 100 yards of warships and even sinking a mock-up of a US aircraft carrier once. However, sending weaponry to the Western Hemisphere presents the US with a new geopolitical difficulty.

According to Politico, the US has issued instructions to Caracas and Havana telling them not to allow the ships to dock in their ports. Tehran and Caracas may be adopting the technique to put pressure on the Biden administration over the Trump government’s severe sanctions. So far, the US has not eased sanctions on the countries, but it is in talks with Iran to resurrect the 2015 nuclear deal, which would result in some sanctions being lifted.

According to a defence official and another person familiar with the material, the intelligence community has proof that one of the ships, the Makran, is carrying fast-attack boats, possibly for sale to Venezuela. Maxar Technologies’ satellite imagery of the Makran from early May showed seven similar sailboats moored on its deck, although it was unclear whether the boats were still on board when the ship set sail.

Meanwhile, according to two additional sources familiar with the issue, Caracas is attempting to use the crisis to get relief from US sanctions imposed by the Trump administration. Venezuelan officials have been told by US intermediaries that allowing the ships to land there will make it less likely that the US will lift sanctions against the country. According to a defence official, Tehran is pressing ahead with the expedition in the hopes of persuading Caracas to allow the ships to land.

It was unclear whether the Biden administration saw the weapons as a threat to the United States. However, allowing the ships to dock and any weapons sale to go through would be a show of defiance toward the United States by two belligerent countries that have intensified their collaboration as both face US sanctions. Simply crossing the Atlantic would be a big step forward for Iran’s military, showcasing the ships’ capabilities and potentially expanding Tehran’s access to the Western Hemisphere.

The top Biden official frequently blamed today’s problems on actions during the Trump administration. Trump revoked the United States’ recognition of Maduro as Venezuela’s president, claiming that he rigged the election, and subsequently slapped sanctions on Caracas. Trump also pulled the US out of the Iran nuclear deal and reimposed economic sanctions on the Iranian capital.

Over the last two weeks, US officials have been tracking the ships’ passage from the Persian Gulf to the east coast of Africa, around the Cape of Good Hope, and now northwest across the Atlantic. The Sahand, Iran’s newest frigate, is accompanying the Makran, a former oil tanker repurposed to a forward staging base.

According to the second defence official briefed on their whereabouts, the ships had completed more than half of their journey from Iran to Venezuela as of Wednesday morning, and were cruising steadily northwest more than 1,000 miles from Cape Town, South Africa. This is the first time the Iranian navy has circled Cape Horn or crossed the Atlantic this far.

TFIGlobal reported that Iranian fast attack boats recently swarmed US Coast Guard cutters in the Persian Gulf. In 2016, IRGC fast boats seized a US Navy boat in the Gulf, causing the US military to be embarrassed.

The expiration of the UN arms embargo on Iran, according to Kirsten Fontenrose, an Atlantic Council fellow and former National Security Council officer focusing on the Middle East during the Trump administration, suggests that this action could be followed by more military equipment exports.

Read More: On one hand, Iran wants a deal with America and on the other, it’s helping Venezuela’s anti-America dictator Maduro

The show of defiance by Iran, Venezuela and Cuba against the US sanctions is a blueprint being created for all states currently impacted by US sanctions. The nullifying of the threat posed by US sanctions is a sign of a weakened United States under the Biden administration. And most importantly it is the Biden administration with its placating policies towards Iran and China which have emboldened the belligerent states in the first place. By continuously chasing Iran to get into the JCPOA deal, the US played its hand very soon and Iran took advantage of the situation. The Biden administration has but itself to blame for the continuous decline of the US power in the concerned regions, be it the Middle East, South America or even the South China sea. By continuously playing into the hands of the belligerent powers just to further his domestic political agenda Joe Biden has for once and all exposed the weakness in the US armour.