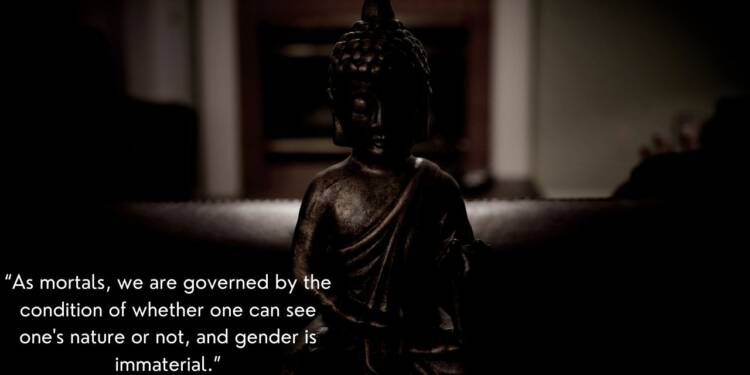 Indian tradition regards Bodhidharma as the third son of Tamil palavatic king Kanchipuram while Japanese tradition regards him as Persian. The main sources mentioned in the various translations differ in their representation of the origin of the Bodhidharma. Below are 15 quotes about Bodhidharma which can help you enlighten yourself.

“Once you have seen your nature, you will not criticize the kindness of others. The mind is formed from the properties of cause and effect, such as a tendon or a bone.”

“When you explain it to them, they do not believe because they are blind. They are so attached to appearances that they are unaware that their minds are empty.”

“People who do not know their own nature and imagine that they are constantly practicing thoughtlessness are liars and fools. People who have no understanding prefer to look into the distant knowledge of things like space, Buddha, images, light, incense and color. Because they do not believe that their own minds can be understood or taught, they can become wise.” – Best Bodhidharma Quotes

“When you use your mind to study reality, you do not understand that your mind is reality.”

“As mortals, we are governed by the condition of whether one can see one’s nature or not, and gender is immaterial.”

“Mind is the root of all things, and everything that grows out of one can be understood, including the mind. Words are illusions. Do not believe that this is Zen.”

“When you look at the Buddha, you will never see your mind as the Buddha. In the world, the mind is transparent, and true vision is such that understanding is true understanding.”

“What one sees is the shape of the eyes, the hearing of sounds in the ears, the smell of smells in the nose, the taste of aromas on the tongue, and the movements and states of mind.” – Best Bodhidharma Quotes

“If you do not see your own conscious nature, you will never find the Buddha, nor will you decompose your body into atoms.”

“All the effort of Buddha and Bodhidharma to undo what society has done to you is over. In the dream, you will see the light of the bright sun, and your remaining attachments will come to an end, and the nature of reality will reveal itself. If one has the truth, there will be no hateful or enjoyable state.” – Best Quotes

“The ignorant mind with its infinite sufferings, passions and evils is the root of all three poisons. The mind is also the root from which all things grow, and you have to understand that all spirits are involved.”

“They must focus their minds on the sublime and let their bodies change with the seasons. The strange tenth and grave precept of Zen is that no one can slander the three treasures of Buddha, Dharma and Sangha. Others claim that those who are empty and commit evil are not wrong.”