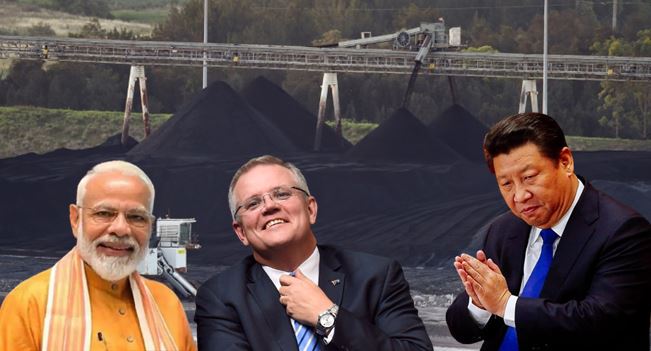 Chinese cities are going dark. Chinese manufacturers are mired in gruesome energy crisis. Coal prices are soaring and inflation is surging like never before. And before Beijing could even think of importing the Australian coal stranded at Chinese ports to alleviate its coal crisis, India has begun importing the stranded shipments en masse to make sure the CCP pays a hefty price for its economic coercion against Australia. As per a Livemint report, Indian firms have bought nearly 2 million tons of Australian thermal coal that has been sitting in warehouses at the Chinese ports. The coal is being bought at discounted prices in a win-win situation as the stranded ships and crew finally make their way out of the mess created by China.

In January this year, China thought of punishing Australia by banning imports of top-quality Australian coal that left the fate of already-shipped coal shipments hanging in balance. China’s ill-thought move left as many as 70 ships and 1,400 seafarers stranded at Chinese ports desperately waiting to discharge their loadings. Many of them had already been redirected to other destinations, and now the remaining ones are finding Indian firms as their new buyers. Effectively, India has cancelled the Chinese war on the Australian coal industry by sending out a clear message that India is firmly standing strong with its Australian friends as they continue to battle Chinese tyranny.

“Answer to every question is India”

Australia is highly dependent on its trade with China that roughly equals to 31% of its total trade overseas. However, the exorbitant reliance on China has not dissuaded the Scott Morrison administration from openly calling out China’s brazen attempts to toss around the norms and rule-based global economic order. In fact, Australia has made it abundantly clear that it will march ahead with its “India first” policy to offset loss inflicted by China. Australian special envoy and former Prime Minister Tony Abbott had recently made an emphatic push for a Free Trade Agreement (FTA) between his nation and India.  He also said that the “answer to almost every question about China is India.”

Read More: ‘The answer to every question on China is India,’ Australia partners with India to take on China

Moreover, India and Australia are striving to devise ways to intensify their co-operation in mining and coal sector. Last month, the first Joint Working Group (JWG) meeting on coal and mines between both countries was held through video conferencing, and the India-Australia Energy Dialogue is slated to be held this month. Australia and India are already part of the trilateral Supply China Resilience Initiative (SCRI) launched at the behest of Japan that aims to isolate China in major supply chains throughout Indo-Pacific. Moreover, it was India that had come to rescue Australian coal industry when China imposed unilateral ban in the beginning of this year. India, due to its burgeoning demand and infrastructural development, was able to substitute the demand for Australian coal from China.

However, Scott Morrison, the person behind Australia’s brutal crusade against the Chinese economy, is not done yet. Instead, he is preparing for upping the game. Scott Morrison is reportedly working on reining in Australian iron ore supplies to China that would render the Chinese Iron and steel industries paralyzed. Australia has already asked its exporters to diversify their export markets away from China under its China plus strategy. “Businesses should continue to pursue these opportunities where they can. But … they also need to be aware that the world has changed. They should always be looking to diversify their markets, and not overly rely on one country”, Australian Treasurer Josh Frydenberg had remarked while announcing Australia’s new China trade policy last month.

Read More: Australia is coming up with its ‘China Plus’ strategy and it is going to be disastrous for Chinese economy

India and Australia, both nations have borne the brunt of China’s hegemonic conduct in the security as well as economic realm. India, being a massive market of 1.4 Billion, can easily provide Australia with an alternative to the vast Chinese markets. Similarly, countries like Japan and Australia can help India in mitigating its reliance on the Chinese imports by collaborating in rare-earth mining and chip-making sectors. China’s tyranny is nearing its screeching end, and its leader Xi Jinping is the one to be blamed for the ‘great fall of China’.