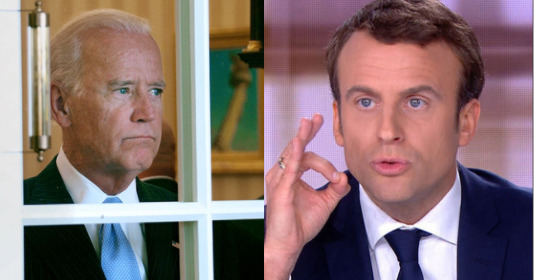 The world democracies and the proponents of free and open sea channels of trade and commerce know that all these like-minded countries need to work together if they could even think about taking on China, but the Biden administration has committed a big sin of wholly ignoring its ally France, which is already really angry. Amid a deterioration in relations between the two countries, some prominent French figures, including President Emmanuel Macron, are rejecting the “woke” culture imported from the United States.

According to Zenger News, a cover story in one of France’s premier magazines, Le Spectacle Du Monde, titled “The Suicide of America,” blamed the fatal pullout from Afghanistan on a “waking tyranny” and questioned whether the American “imperial” was falling.

In many ways, when seen in the context of the larger goal of containing the Chinese threat and securing the Indo-Pacific, the announcement of a trilateral security arrangement called AUKUS between Australia, the United Kingdom, and the United States is indeed historic. However, the countries could have handled it all better. For instance, France is currently infuriated with all three of its allies and partners – the U.S., UK, and Australia. India and Japan too will not be very happy with two QUAD members setting up a trilateral security arrangement, alongside the UK, to contain China. The Five Eyes alliance is in any case suffering a lull of late.

In such an atmosphere, things could have indeed been done differently. Australia could have been given the nuclear propulsion technology by the United States via the Quad arrangement itself. In fact, France could have been made an observer at Quad, giving the alliance more teeth against China, and given Paris’ deep involvement and stake across the Indo Pacific.

The French government has immediately recalled its ambassador to the U.S. in response to the recently announced national security partnership between Washington, Canberra, and London. Jean-Yves Le Drian, the French minister for Europe and foreign affairs, said on Friday that the move was made at the request of President Emmanuel Macron himself, and that “this extraordinary decision reflects the exceptional seriousness of the announcements made on September 15 by Australia and the United States.”

Through thick and thin, France has been a staunch ally of the United States. This is said to be the first time France has made such a drastic move, and it perfectly encapsulates the country’s rage. France has been forthright in expressing its displeasure with friends such as the United States, the United Kingdom, and Australia. The arrangement was dubbed a “unilateral, violent, and surprising move” by France’s Foreign Minister. Le Drian told French radio station ‘France Info’ that it was a “stab in the back” and that France had built a trusting relationship with Australia, which had now been “betrayed.”

According to Zenger, Macron, who has been chastised by French progressives, told Elle Magazine this summer that woke culture was “racializing” French society. “I see that our society is becoming progressively racialized,” he said.

Several members of his government have also shared anti-woke views, including Elisabeth Moreno, the French delegate minister for gender equality and diversity. “The ‘woke’ culture is something very dangerous, and we shouldn’t bring it to France,” she told Bloomberg News in May. A panel at the year’s “Tocqueville Conversations,” near Normandy discussed the perceived decline of free speech and expression in the United States that some attribute to “woke” culture.

Secretary of State Antony Blinken is slated to travel to France next week after Australia cancelled a deal to purchase a French submarine in favour of creating a new Indo-Pacific security arrangement with Washington and the United Kingdom. The French criticism of the U.S. comes amid a fracture in American-French relations.