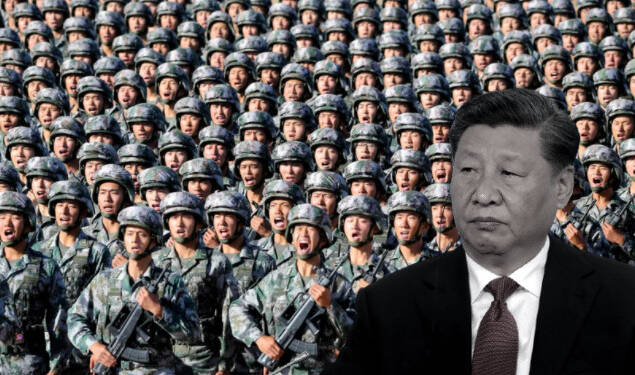 Chinese President Xi Jinping is talking about Taiwan again. However, there is a key difference- Xi is no longer talking about invading the island nation, rather he is talking about the peaceful reunification of Taiwan and mainland China. So, why has Xi mellowed down on the Taiwan front? Is it a transformation from a cruel dictator to a benevolent leader? Well, of course not.

Xi is facing pressure from the Chinese People’s Liberation Army, which stands at the cusp of mutiny despite being the armed wing of the Chinese Communist Party (CCP). The PLA Generals and other senior officers remain worried about the consequences of Xi’s sabre-rattling which seems to have forced the Chinese President to make a soft statement on Taiwan.

Chinese President Xi Jinping promised on Saturday to achieve the goal of “peaceful reunification” with Taiwan. Interestingly, the Chinese President did not mention the use of force after a week of spiralling tensions with the island nation of Taiwan that sparked international concern.

In a statement that reeked of weakness, Xi said that the Chinese people have a “glorious tradition” of pushing back against separatism.

Xi added, “Taiwan independence separatism is the biggest obstacle to achieving the reunification of the motherland, and the most serious hidden danger to national rejuvenation.” The Chinese President also said, “No one should underestimate the Chinese people’s staunch determination, firm will, and strong ability to defend national sovereignty and territorial integrity.”

Xi has quite clearly mellowed down on the Taiwan front. The usual sabre-rattling over Taiwan was nowhere to be seen. Only in July, Xi had threatened to “smash” any attempts at formal independence. In 2019, he had directly threatened to take Taiwan by force.

Moreover, only last month, Chinese Foreign Ministry spokesperson Zhao Lijian had tweeted, “Taiwan is part of China. China must and will be reunified. This historical trend cannot be stopped by any force. We warn the Taiwan authorities that any attempt to seek independence and reject unification is doomed to fail.”

Taiwan is part of China. China must and will be reunified. This historical trend cannot be stopped by any force. We warn the Taiwan authorities that any attempt to seek independence and reject unification is doomed to fail. pic.twitter.com/qiOzHiCUa3

Similarly, Hu Xijin, editor-in-chief of the Chinese State-owned publication Global Times has warned, “If there are US troops present on Taiwan island, China will crush them by force”.

Why is Xi getting soft?

Many would believe that US involvement in the China-Taiwan dispute is weighing down an arrogant Xi Jinping. However, Xi’s issues could be more internal than external. Xi fears the Chinese PLA more than the mighty US military.

The PLA has shown signs of discontent and even mutiny over the past one year or so. Last year, the PLA and some local authorities seemed to disagree with the CCP policy of making constant intrusions into Japanese waters near the Senkaku Islands.

Similarly, about the South China Sea disputes, the PLA seemed to be worried about ‘accidental’ clashes with American military assets and even asked its ground troops “not to fire the first shot”. On the other hand, the CCP kept dismissing American deployments as “paper tigers”.

The ‘One China Principle’ and reunification of Taiwan forms a top agenda of CCP’s policy. The Chinese Foreign Ministry rakes up the Taiwan issue frequently, but the PLA veterans have been warning Xi Jinping against any plans to take Taiwan by force.

Last year, a retired PLA Major General said, “China’s ultimate goal is not the reunification of Taiwan, but to achieve the dream of national rejuvenation so that all 1.4 billion Chinese can have a good life. Could it be achieved by taking Taiwan back? Of course, not.”

A serving PLA Air Force Senior Colonel Dai Xu had criticised the CCP even more bitterly last year. He wrote an article titled, “2020, Four Unexpected Things and Ten New Understandings About the United States.” Xu Gabe a brutal reality check to the CCP about the American ability to inflict costs on China. Xu said, “The US would be so tough, imposing stacked tariff increases of 30 billion, 50 billion and then 200 billion.”

He added, “Remember: the 30 billion in tariffs imposed on you will bring an effect of 60 billion, 90 billion, or more. This is where Imperial America is truly powerful. We must be rational instead of angry, and fight wisely.”

Why the PLA hates Xi Jinping:

The PLA hates CCP General-Secretary Xi Jinping and it has every reason to do so. Xi’s global domination dreams are putting PLA lives at risk. Due to Xi’s belligerence, the PLA troops had to clash with battle-hardened Indian Army soldiers at the Galwan Valley in Eastern Ladakh last year. The clash led to innumerable PLA troops getting slaughtered.

Recently, a few troops from China were temporarily detained by Indian soldiers in Arunachal Pradesh’s Tawang after around 200 of them crossed over into the Indian side from Tibet and attempted to damage unoccupied bunkers. This was again a moment of deep embarrassment for the PLA and senior Chinese military officials would be secretly blaming President Xi was forcing them into such situations.

The PLA is on the verge of mutiny for obvious reasons and this is what explains Xi’s soft Taiwan remarks.

Duterte is putting his weight behind Bongbong. And that’s a nightmare for the Philippines