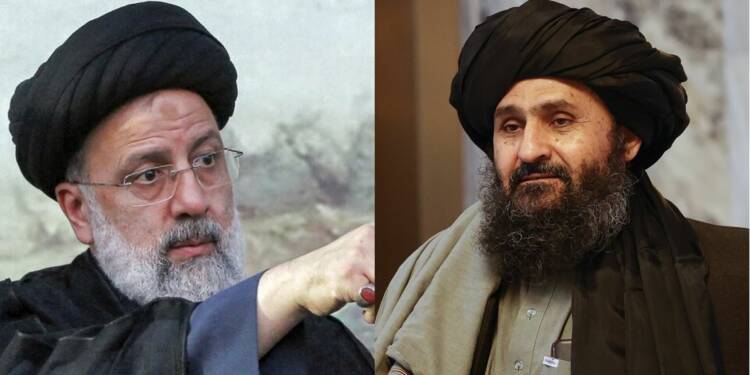 Iran’s worst fears are coming true. The Taliban’s blistering takeover of Afghanistan has stirred turmoil at Iran’s eastern borders. The illicit drug trafficking and killing of the Hazara ethnic minority at the hands of the Taliban are the two contentious issues putting Iran and the Taliban on a collision course.

Last week, more than three tons of narcotic substances were discovered on the Iran-Afghanistan border, stoking concerns in Iran about the thriving illicit drug trade. Iranian officials estimate the annual production of narcotics in Afghanistan reaching over 8,000 tons in recent years. A Reuters report suggests illicit narcotics are the largest industry in Afghanistan except for war.

The drug trade is vital for the cash-strapped Taliban to keep itself afloat and tighten its grip over the country. The Taliban banned opium production in the country in the 2000s to seek international legitimacy, but it buckled under the pressure from the regional influential groups. With the Taliban’s resurrection in 2021, the drug trade has again intensified.

Read More: As fear of Putin sets in, a desperate China is trying to win Russia’s support in Afghanistan

While Iran is an easy transit route for the illegal narcotics trade for the Taliban, Tehran has now warned the new Afghan rulers of dire consequences if the border monitoring mechanisms are not deployed immediately. After foreign troops’ withdrawal from Afghanistan, Tehran now wants the Taliban to rein in its drug traders.

Qassem Rezaei, deputy commander of the Iranian Police Force, has now called on the Iranian government to hold the Taliban accountable for the menace at Iran’s doorstep. He highlighted, “Also be responsible for insecurity and anything that happens on the eastern borders because according to border treaties and agreements are obliged to be accountable to Iranian border guards, although our border guards are fully prepared and if necessary, we use the forces of other organizations in this regard.”

So, which other organizations is Qaseem Rezaei talking about that he could unleash on the Taliban? It must be none other than the Fatemiyoun brigade comprising the Hazara Shia minority community of Afghanistan.

When the Sunni Muslim Taliban rose to power in the 1990s, it started targeting Hazara Afghans that prompted the Shia community to seek refuge in Iran. Iranian government found an opportunity in their crisis and offered them citizenship, employment, legal protection and payments in return for their services in the Fatemiyoun Brigade.

For years, Iran reaped the benefits of building up this militant organization by deploying the Fatemiyoun fighters for securing Iranian interests in Iraq and Syria. Estimates put the number of Fatemiyoun troops Iran deployed to Syria, to fight ISIS on behalf of President Bashar al-Assad, as high as 20,000 or even 50,000.

However, as the violence in Afghanistan claims the lives of poor Hazaras, Iran has scrambled to mobilize the Fatemiyoun brigade to take care of any potential threat rising out of the Taliban’s misadventure in the East. A BBC report reveals that the Taliban recently slaughtered 13 members of the Hazara community, including a teenage girl. “The Victims were massacred in Daykundi province in August. Nine were former government soldiers who had surrendered to the Taliban,” the BBC report read.

Tehran has sent a clear message to Kabul that Iran’s attitude towards the Taliban-ruled state will only depend upon the group’s behavior and will for defending the rights of oppressed minorities. Iran’s foreign minister Kamal Kharrazi recently said, “The Islamic Republic of Iran does not intend to interfere in the internal affairs of Afghanistan, but of course, it has legitimate interests in that country that must be secured.”

Read More: Iran’s righteous war: Iran’s Hazara militia and its oil blockade has brought the Taliban to their knees

The Taliban is using Iranian ports to channel its illicit drug trade into Europe and Asia, straining Iran’s economic ties with the big powers. As recently as last week, India’s largest port operator Adani ports said that it will not handle cargo from Afghanistan, Pakistan and Iran from next month following the seizure of almost three tonnes of heroin.

Initial reports had indicated that the containers carrying the substance originated from the Iranian port of Bandar Abbas. The seizure has invited closer scrutiny of Iranian shipments coming into India stoking concerns in Tehran. Indian and Iranian officials also discussed the matter where Iranian authorities vowed to come down heavily on the illicit trade originating from Afghanistan. Iran has also expressed its displeasure over Adani’s decision of banning Iranian shipments.

The Iran-Afghanistan relations will face a bumpy road ahead given the Taliban’s exponential reliance on the illicit narcotics industry. While Iran is preparing its Fatemiyoun brigade to take over a belligerent Taliban, the militant group will seek to persecute the Hazara community to fortify its precarious sway over the nation.