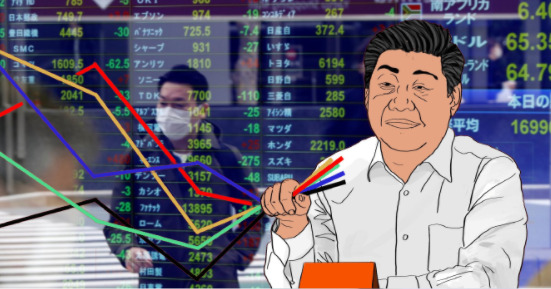 China is the second-largest economy in the world, but it is now literally down to begging. There was a time when the free world countries wanted China to open up its financial markets for foreign investors, and China resisted the demand because it didn’t want to create a level-playing field for other countries.

However, as the Chinese economy dies a slow death due to an energy crisis and a bursting real estate bubble, China is no longer as stubborn as it used to be. It is opening up all sectors of its economy and financial markets so that foreign investors stay and resurrect whatin looks like the ailing Chinese economy.

China’s GDP numbers have declined drastically. In the third quarter of the ongoing financial year, China recorded a meagre growth rate of 4.9 per cent down from 7.9 per cent in the previous quarter.

Despite fudging GDP growth data, Chinese numbers remain awful. The real estate sector is the biggest casualty, with a 17 per cent plunge in home sales. It now seems that the prompt sector that Beijing traditionally uses to pump growth numbers artificially is too weak to stimulate fake growth in the Communist nation.

The Chinese exports industry and manufacturing sector are already in tatters and so a red-faced China needs an alternate solution. With the power sector crisis intensifying and property curbs remaining strong, we can expect that the Chinese economy will get into deeper trouble.

As the GDP numbers show no signs of revival in China, the Communist nation is doing what no one would have imagined. It is opening up its markets as a last-ditch effort to lure foreign investors into staying within China.

China’s regulator has expanded the investment scope for foreign investors. Key commodity and stock market derivatives have been opened up to foreign investors even as the country’s local private sector reels under the weight of tight regulatory measures and relentless crackdowns by the Xi Jinping government.

China is in hurry now. Qualified foreign investors have been allowed to trade commodity futures, commodity options and stock index options with effect from November 1, as per an update on the website of the China Securities Regulatory Commission Friday.

China believes that opening up its markets will allow more foreign investments in the country, and reinvigorate its exports industry. However, Xi’s imprudent actions have caused structural damage to the Chinese economy, weakening its very foundations. Ornamental measures like opening up the financial markets to foreign investors are unlikely to help because the investor sentiment in Chinese markets is already very poor.

In all probability, foreign investors are unlikely to get lured by Xi’s last-ditch effort to save the economy of China. The grand exit of foreign investors from the China has started and no one including Xi himself can stop it.