Kurds in Syria and Iranians in Azerbaijan: Turkey set to face the heat at two fronts with Putin’s imprints all over it 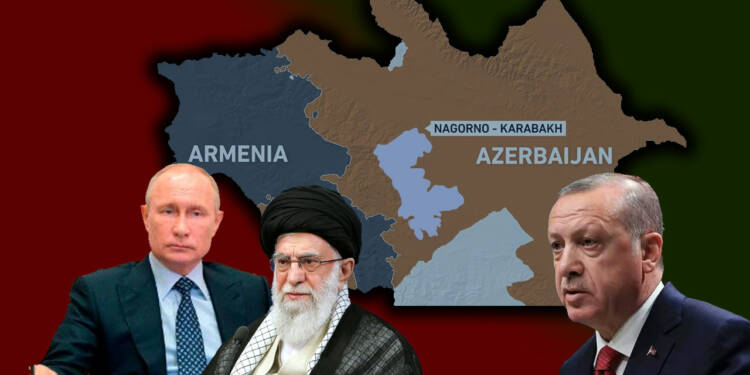 Erdoğan behaves like a textbook bully. He doesn’t care about what international powers like the US and the EU have to say about his policies and goes ahead with his belligerent tactics. However, Russian President Vladimir Putin knows how to cut Erdoğan to size. He is now mounting trouble for Erdoğan on two fronts- Azerbaijan and Syria.

Turkish President Recep Tayyip Erdoğan is behaving like a true wannabe Khalifa for quite some time now. He is constantly trying to expand Turkish-held territory. In Syria, he wants to take control of more and more regions. In the Eastern Mediterranean, he has been looking to mount trouble on Greece and Cyprus. In the Caucasus, he is instigating Azerbaijan against Armenia and in Libya, Turkey has backed a brutal Muslim Brotherhood regime that could help Ankara expand its hold over the Mediterranean sea.

Turkish President Recep Tayyip Erdoğan’s hooliganism in the Middle East is about to meet a brutal end. The Kurds in Syria and Iranians in Azerbaijan are proving to be a tough nut to crack for Ankara. And while Turkey wants to push them back, Russian support to Turkey’s enemies is likely to put Ankara in jeopardy.

Who are Kurds and why does Erdoğan hate them?

The Kurds are an ethnic group native to the Mesopotamian plains and the highlands in what is now south-eastern Turkey, north-eastern Syria, northern Iraq, north-western Iran and south-western Armenia. The Kurds were instrumental in bringing down the Islamic State “Caliphate”.

However, Erdoğan hates Kurds because Turkey faces Kurdish insurgency led by the Kurdistan Workers’ Party (PKK) within its own territory and sees an autonomous Kurdish government and its militias- People’s Protection Units (YPG) across the border in Syria as a security threat for itself. In fact, the Turkish government maintains that the YPG and the Syrian Kurdish Democratic Union Party (PYD) are extensions of the PKK and looks down upon them as terror organisations.

How Russia tricked Turkey on the Kurds issue

Kurds fought the IS alongside American troops and therefore Syrian Kurds were described as US allies. However, after the US withdrew its forces from Syria in 2019, the Kurdish administration in Syria decided to align itself with Russia and the Bashar al-Assad administration in Damascus.

Meanwhile, Turkey had launched a brutal attack on Kurdish-held towns in Northeast Syria after the withdrawal of American troops. In order to justify the brutal attack that involved the use of Syrian Jihadists to commit some of the most horrifying human rights violations, Erdoğan argued that he wanted to create a ‘safe zone’ for Syrian refugees in Northeast Syria.

However, Putin had then intervened. Ankara and Moscow reached a deal that involved bringing in Syrian military forces to the adjoining areas and reducing Turkish presence to two small towns- Tell Abyad and Ras al-Ain.

Turkey agreed to the deal on the promise that all members of the Kurdish People’s Protection Units (YPG) and their arms “will be removed”. However, this hasn’t happened. It seems that Putin is okay with Kurdish fighters staying where they are. So, Turkey has been effectively limited to a small area in Northeast Syria whereas the Kurds continue to hold on to the area from which Erdoğan wanted to displace them.

What is happening in Azerbaijan?

A war broke out between Azerbaijan and Armenia last year in the Nagorno-Karabakh region. The main instigator of the war was none other than Erdoğan. It was a part of Erdoğan’s wannabe Khalifa dreams to unite the Muslim world under the flag of a Turkish caliphate, reminiscent of the Ottomans.

Turkey lacks a direct link to Central Asia, a region, considered to be Russia’s sphere of influence, and the only roadblocks are Armenia and the Nagorno Karabakh Republic. Attacking Armenia and taking control of the Nagorno-Karabakh region is, therefore, a part of Erdoğan’s dreams to unite the Turkic world from Central Asia to Turkey under Ankara’s leadership.

However, Turkey’s policy of emboldening Azerbaijan against Armenia risks pulling Iran into the conflict.

In fact, tensions are already rising between Tehran and Baku. Iranian trucks have carried important supplies to the Armenia-controlled Nagorno-Karabakh region for several years. However, after Baku retook control of some territory that includes parts of the road connecting Iran to Nagorno-Karabakh via Southern Armenia, Azerbaijani police and border security forces target and block Iranian trade in the region.

A military drill organised by the so-called “Three Brothers”—Azerbaijan, Turkey and Pakistan in Baku proved to be the final straw for Tehran. In response, Iran conducted some major war drills on its 700-km long border with Azerbaijan in a stern warning to Turkey.

How is Russia getting involved?

Just like the Kurds, the Iranians are also looking to cash in on their ties with Russia and ratchet up the diplomatic pressure on Ankara.

Lavrov, on his part, announced a “3+3” discussions proposal that would involve the three post-Soviet states in the Caucasus region namely Armenia, Azerbaijan and Georgia, and the three big powers in the region’s vicinity- Turkey, Iran and Russia.

Lavrov said, “Our Iranian friends are supportive of this initiative, as are Azerbaijan and Turkey.” The Russian Foreign Minister added, “We are working on it with our Armenian colleagues. We hope that despite its current problems, Georgia will be able to realize its fundamental interest in creating such a mechanism for consultations and approving decisions for the accelerated development of this region, which had been held back for a long time by the ongoing conflicts.”

So, basically, Iran has gone complaining to its big brother about Turkey’s hooliganism. And now, Russian President Vladimir Putin seems set to confront Turkish President Erdoğan in front of the region’s other leaders. On Iran’s insistence, Russia is sending a loud and clear message to Turkey- fall in line or fall by the wayside.

Turkey is facing a lot of heat on two fronts, and Russia’s imprints are clearly visible in both regions.

Game of Thrones is in full swing in CCP