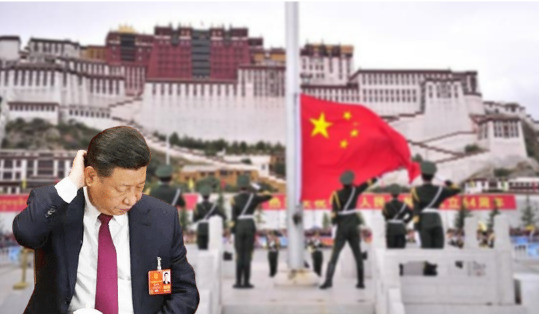 Tibet is a living example of how brutal Chinese Communism can get. Tibet is an ancient Buddhist civilization and would have been the tenth-largest country in the world had it not been occupied illegally by China in 1951 by the Chinese People’s Liberation Army (PLA). While the world was busy handling the Korean war, Chinese soldiers sneaked into Tibet and annexed the country illegally. Tibet was coerced to become a part of China in 1951 when a Tibetan delegation was made to accede the Buddhist nation into China even without approval from the Dalai Lama.

For some time, Tibet tried hard to maintain autonomy and fight for liberation from the Chinese Communists. However, the Chinese PLA attacked Dalai Lama in 1959 when Mao Zedong’s PLA forces shelled the Potala Palace. In the upcoming years, thousands of Tibetan monks were killed by China.

In the later years, China made one thing clear- it has no plans of giving Tibet any kind of autonomy. Last year, Chinese President Xi Jinping asked the Communist nation’s highest-level meeting on Tibet to educate the Tibetan public about fighting against separatism to “form an impregnable fortress in maintaining stability”. Xi also told the highest Chinese body on Tibet to focus on border security.

Tibetans hate China because Beijing has robbed them of autonomy in their homeland. However, they are bound to kickstart an actual revolution when the CCP starts robbing their livelihoods themselves.

Many Tibetan nomads continue to follow the same kind of living as their ancestors for the past few centuries. They have been herding livestock on lush Tibetan grasslands for hundreds of years. Yet, as per RFA, the Chinese government had agreed to allow local nomads near the town of Kyegudo in Kyegudo in the Yulshul (in Chinese, Yushu) Tibetan Autonomous Prefecture to use grazing land without any disturbance but now their time has expired.

A local source told RFA’s Tibetan service, “They are forcing Tibetans to sign these ownership documents which transfers proprietorship of these lands to the government.”

The local source added, “The nomadic regions in Trindu [in Chinese, Chenduo] county in Kyegudo are where they are revoking usage permits now and confiscating the land under the Grassland Preservation Policy. The real purpose of confiscating the land is to force the Tibetan nomads to relocate to the city.”

A Tibetan living in exile spoke to RFA on condition of anonymity. The exile revealed that China has been confiscating Tibetan grazing lands over the past few years.

The exile added, “The confiscation of land in my hometown in Tibet by the Chinese authorities is worse this year than it was last year.” The exile also said, “Land permits that were given before are now revoked and has become invalid. Therefore, this is affecting the livelihoods of the Tibetan nomads.”

Pema Gyal, a researcher at Tibet Watch, a UK and India-based organisation which promotes Tibetan human rights, said, “The Chinese government has long implemented these kinds of policies to force Tibetans to surrender their ancestral land.”

Gyal added, “One of the main reasons is to exploit Tibet’s natural resources. Another is to relocate all the Tibetans in a smaller space so that the government can more easily control them.”

Stealing grazing lands may be the last straw:

China has committed innumerable human rights violations against Tibetans. However, Tibetan nomads now have their backs against the wall. China is trying to steal their livelihoods and fighting the CCP is no longer a matter of choice but a question of survival for Tibetans.

Meanwhile, Xi has been conscripting Tibetans into the People’s Liberation Army (PLA) as mainland soldiers in China are not acclimatised to take on the Indian Army in Ladakh’s tough terrain and extremely cold weather.

As per intelligence reports, People’s Liberation Army officials from Lhasa visited Rudok town in Ngari Prefecture in the far west of Tibet Autonomous Region (TAR) in February to design the recruitment plan. Now the PLA has finalised the effort to induct a Tibetan Army Unit to ensure that the next time it does not lose to the Indian armed forces due to lack of local recruits.

However, if you are recruiting Tibetans as soldiers on one hand and stealing their lands on the other, then you can never be sure about when and how they pick up arms against you. China is sleep-walking into a Tibetan snare which can set Beijing up for a major embarrassment.