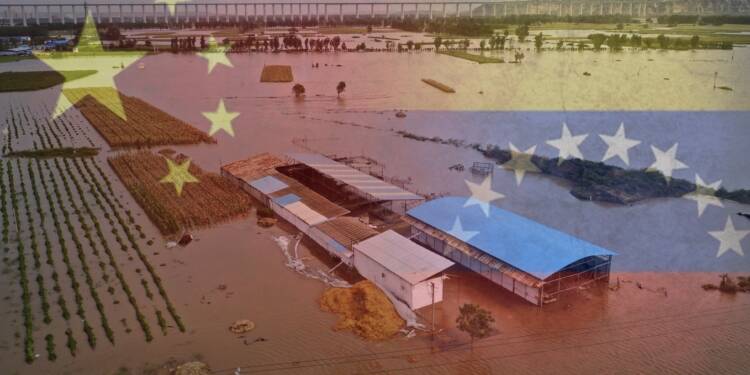 The Chinese people have been suffering under the suicidal policies from Beijing which are becoming even more draconian by the day. Xi Jinping’s proactiveness in increasing his authority is not matched with the lethargy and calas actions Xi Jinping and his administration has taken with respect to the management of the recent floods. Heavy rains in regions of the north and central China over the last month have wreaked havoc on the agricultural industry of china, causing a spike in vegetable prices and highlighting the growing influence of extreme weather events on everyday life.

While this is not the only cause, but it is one of the more direct ones which could be highlighted easily and conclusively. While the vegetable shortages have led to a situation where meat has become cheaper and more affordable. Add the increasing vegetable prices to the property and building bubble going bust, electricity shortages, people losing jobs in scores due to movement of companies and manufacturing units out of China and uncontrolled COVID situation are among some other reasons why the situation has worsened.

With the living atmosphere worsening, less on cash forced to stay indoors or surveilled extensively, the Chinese people are living in such pitiable conditions and now they are not even able to afford the ever-soaring prices. The most vulnerable are turning to the cheaper alternatives to achieve the daily need for nutrients, which includes all sorts of animals and insects creating a Venezuela-esc food crisis.

The crisis at hand

In recent weeks, vegetable prices in China have risen sharply, costing more than meat in some cases, and adding to consumers’ frustrations, which have already been exacerbated by power outages and rigorous virus controls. According to the latest data from the Ministry of Commerce, wholesale vegetable prices increased by 28% in the four weeks ending Oct. 22 and are already at their highest level since February. This year’s crops were harmed by heavy rains in major growing regions, and rising coal prices have made greenhouse farming more expensive.

Despite increasing factory-gate prices, consumer inflation has remained low this year due to falling pork prices from last year and sluggish home demand. In October, consumer price rise fell to 0.7 per cent, with JPMorgan forecasting 0.9 per cent for the year, significantly below the government’s official objective of 3 per cent. Bloomberg polled economists, who predicted a 1.1 per cent increase in 2021 and a 2.2 per cent increase in 2022.

The contribution of consumer spending to China’s GDP is declining rapidly.  As per the World Bank, China’s household, and government spending as a share of GDP dropped to 54.3% in 2020 from a high of 85% in 1962. Moreover, China’s national income has increasingly been allocated towards governmental institutions and not the households, which explains the rapid decline in household consumption. With this decline in the liquidity and money in the hand of the consumers, the most vulnerable will be forced to look for ways and means to fill their tummies.

Due to rising costs and decreasing supplies of the fuel needed for heating, generating electricity, and powering vehicles and trucks, gas stations in several parts of China have begun restricting diesel supply. The shortage of fuel adds to the world’s second-largest economy’s energy woes. The country is already dealing with coal and natural gas shortages, which have resulted in massive power outages. The global supply-chain nightmare is set to become even more complicated due to a fuel scarcity for vehicles.

Diesel is the latest in a long line of goods in China that have suffered price spikes and scarcity this year. According to research published Oct. 22 by commodity market information source 315i.com, diesel prices at key refineries in Shandong have risen roughly 55 per cent since early September, from 5,500 yuan per tonne to 8,600 yuan per tonne. As mentioned before, this will only exacerbate the situation and make things worse for the citizens of China.

As per Bloomberg, in research, GF Securities analyst He Xiaoshu stated that the La Nina weather pattern forecast this winter, which means below-normal temperatures in the northern hemisphere, is driving expectations that vegetable output and transportation will be badly impacted. Adding all these factors, including the energy crisis and the food crisis, China is set to face harsher winters as people will find it difficult to afford a healthy mix of food, given the extreme inflation, people will be forced to live on whatever they can afford which may include animals and insects which would be avoided in other scenarios. The start is very similar to the Venezuela food crisis, and if not addressed can even lead to dangerous times ahead.

In Venezuela, more than 5 million people have left the country, with 91 per cent of those who remain living in poverty. Moreover 9 million Venezuelans, or about a third of the population, are food insecure or malnourished. Now, back in China, as the terrible flood management, as well as all the slew of bad policy decisions, are starting to have a cascading effect, things can turn out the Venezuela way in China as well.