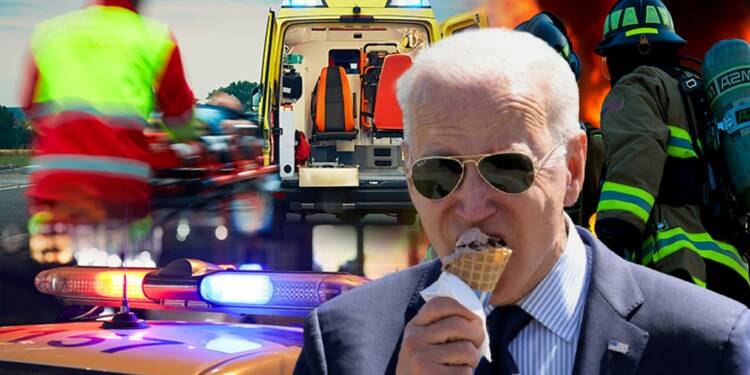 While rising crime rates in the US have got Biden cornered, the radical progressives still have been pushing to get police forces abolished under their broad agenda to ‘defund the police’. Meanwhile, Biden has decided to divert $350 million in COVID-19 funds to police. However, things have turned out to be way worse as the emergency services have collapsed under the burden of constant vilification, forced vaccine mandate, and vanishing budget. The American Ambulance Association has issued a warning that the country is experiencing a “crippling manpower shortfall” that could jeopardize 911 emergency services due to an unsustainable staff turnover rate.

According to the AAA/Avesta 2019 Ambulance Industry Employee Turnover Study, annual turnover among emergency medical technicians (EMTs) and paramedics was between 20 and 30 percent, equating to a 100 percent turnover over four years. “This is a really high stress job, and some individuals don’t comprehend what they’re entering into,” the association president said, stressing that ambulance drivers and emergency medical technicians are under a lot of pressure at work. He claims that some people quit the military for more lucrative job options.

On Thursday, New York City firemen marched to Mayor Bill de Blasio’s home to protest the city’s COVID-19 vaccine restrictions. Beginning Nov. 1, the mayor approved a vaccine mandate that requires all city employees to acquire a coronavirus vaccine or face losing their jobs. By 5 p.m. Friday, most city workers must show proof of receiving at least one dose of vaccine.

Andrew Ansbro, president of the Uniformed Firefighters Association, told Fox News that he is vaccinated and that the vaccine mandate may result in up to 45 percent of the New York City Fire Department losing their employment.

Lack of funds and Covid Pandemic

President of the American Ambulance Association Shawn Baird told Fox News in an interview that, the problem has been exacerbated by a lack of finance and continued COVID-19 pandemic situation. “This is a really high stress job, and some individuals don’t comprehend what they’re entering into,” the association president said, stressing that ambulance drivers and emergency medical technicians are under a lot of pressure at work. He claims that some people quit the military for more lucrative job options.

Employees who do not leave their jobs are “under an unbelievable workload,” according to Baird, due to a variety of stressors such as the pandemic, as well as wildfires and other natural calamities.

Baird said the union will provide a number of alternatives to Congress in order to address the situation, including a bonus programme for workers “who have stuck with the field” and have “borne the brunt of this last year.”

He cited Florida, where Gov. Ron DeSantis offered $1,000 one-time incentives for about 174,000 first responders across the state, including police officers, paramedics, EMTs, and firefighters, in May.