Mary Lindsey: Zoom virtual hearing incident and how the accused was caught during the live hearing. 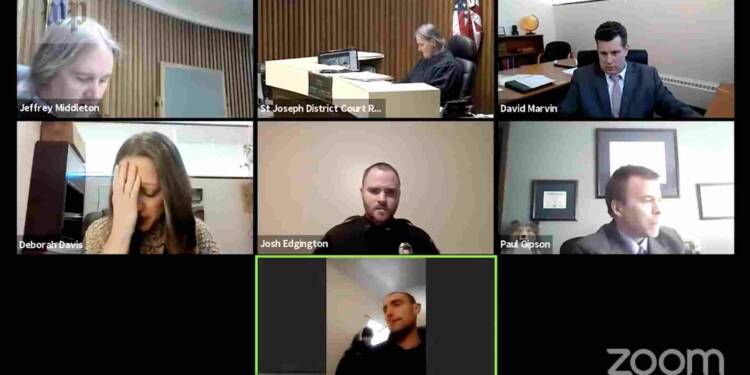 Kobe James Harris, 21, from Sturgis, was charged with assault following a February 9, 2021 altercation with his girlfriend Mary Lindsey. Kobe Harris, 21, whom Lindsay accused of hurting her in an argument on February 9, has been in St. Joseph County Jail without bail since he was arrested during a preliminary investigation on March 2.

Mary Lindsey, a Southwestern Michigan single mother was seen in a dramatic courtroom video. There was a virtual hearing going on, both Harris and Lindsay attended the March 2 live hearing along with attorneys and Judge Jeffrey Middley. It contained Lindsay’s address, which she had given twice at the request of the judges. At this point, Davis (complainant’s attorney) informed the court that the police were knocking on the door of Lindsay’s apartment.

The accused attended a Zoom wiretap via phone video from Lindsay’s apartment while he was nearby on another device. Harris, who was arrested for breaking the connection, denied attacking Lindsay during the February incident. Lindsay eventually provides the address to Sturgis before the same request is forwarded to Harris, who immediately responds with a different address.

Also Read : The Last of Us 2 Ellie Tattoo: About the Game and Tattoo

Davis had been informed prior to the hearing that Harris may have been at Lindsey’s home and sent agents earlier. The court hearing in Zoom ended with handcuffs after it was discovered that they were present at the victims’ home. Davis was worried about her client’s safety and called the police who had arrived at Lindsey’s address and the accused was caught red handed.

Davis said that she noticed some strange behaviors of Mary Lindsey during the hearing, including the way she kept looking at the camera while answering questions about the alleged assault.

Court officials, lawyers, and defendant Kobe Harris watch the trial on March 2, 2021, while Harris, the alleged victim of the attack, opens the door for Highway Police. Harris and Lindsey’s cameras interrupted the call as she opened the door for the officers to answer. When live broadcast of Mary Lindsey went online, Harris was handcuffed.

In the video we can see that during the beginning of the hearing Assistant Attorney Deborah Davis told the judge that she believed Harris was in the same location as Lindsay and that she feared for Lindsay’s safety and the judge due to this reasonable suspicion commands Harris to go to the door and show the house number on the door, when the accused denies to do so, Davis instructs her client to open the door as the police had arrived at her address.

Then Harris’ camera went out for a few seconds, Mary Lindsey looked away, and her face disappeared from the screen. As if to imply, Harris appeared again, this time from Lindsey’s phone with a cigarette in his mouth and a policeman standing behind him.