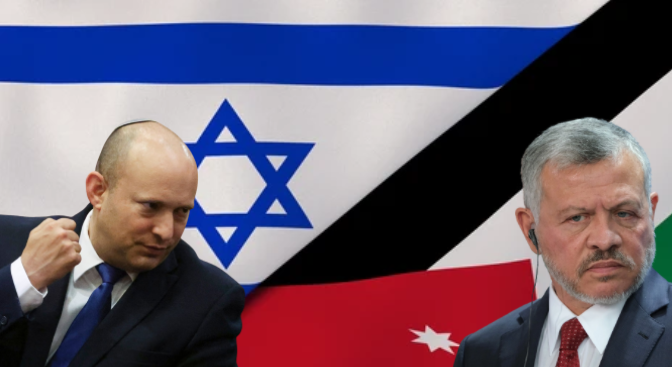 Bärwald’s photographs have unintendedly revealed one thing- Jordan participated in a military exercise with Israel, which raises some bigger questions. Where do Jordan’s loyalties lie? Jordan keeps talking about supporting Palestine in public but as Bärwald’s photographs show, the Middle East nation cooperates with Israel in secret.

Jordan and Israel- a complicated history

The Kingdom of Jordan had a very chaotic and intimate history with Israel and Palestine. Known as Transjordan during the British occupation, the Kingdom achieved full independence in 1946.

Jordan maintained close ties with both Britain and the United States. However, after Israel came into being in 1948, Jordan joined its Arab neighbours in the first Arab-Israeli war. However, as King Abdullah told Jewish envoys, his primary purpose while participating in the war was to extend his Kingdom and include the area allotted to Palestinian Arabs under the United Nations partition resolution of November 1947.

By the time the Jordan-Israel armistice was signed on April 3, 1949, the West Bank and East Jerusalem came directly under Jordan’s rule.

However, the war also meant that half a million Palestinian Arabs now became a part of the Kingdom of Jordan.

In 1967, Jordan again joined the six-day war against Israel but faced significant losses including, West Bank and Jerusalem. Thereafter, Jordan turned somewhat practical and tolerant of Israel. It reduced its involvement to mere token participation in the Yom Kippur War against Israel in 1973. In 1988, Jordan made territorial concessions to Israel and in 1994, Jordan and Israel signed a peace agreement.

On the other hand, Jordan’s relations with Palestine are guided by two factors-

The Hashemites, who presently run Jordan, are an old and respected dynasty. They used to rule over the birthplace of Prophet Mohammed and the holiest site in Islam Mecca from the 10th century till 1924 when they were expelled by the House of Saud, the royal family which now rules modern Saudi Arabia.

The Hashemites however reasserted themselves and ultimately gained control over the Al-Aqsa Mosque- the third holiest site in Islam. So, this means Jordan cannot openly show its love for Israel and abandon Palestine.

From a historical perspective, Jordan had a bad relationship with Yasser Arafat’s Palestinian Liberation Organization (PLO). Jordan even waged the war of Black September against the PLO 1970, because it viewed the group as a threat to the Hashemites rule. This was one of the major reasons contributing to a better relationship between Israel and Jordan.

However, Jordan today has a total of 2 million registered Palestine refugees. The present ruler, King Abdullah II cannot openly disregard Palestine and embrace Israel due to its demographics.

Let us tell you about a small incident- Israeli police stormed the al-Aqsa mosque in May 2021. However, Jordan, the custodian of holy cities in Jerusalem failed to initiate any action in the protection of the Palestinians. So, you can quite clearly see where Jordan’s loyalties lie.

Jordan is a friend of Israel, but it is quite discreet about it. This essentially relates to Jordan’s internal politics.

A recent Washington Post report based on US, British, Saudi, Israeli and Jordanian sources revealed that Trump’s dream to unite American allies- Israel and Saudi Arabia under his ‘deal of the century’, could never materialise because Jordan’s King Abdullah II did not bend on the issue of making concessions on the status of

Jerusalem and other Palestine-related issues. Ultimately, Abdullah’s Kingdom did feel shaken due to the pressure piled by Israel, Saudi Arabia and the US.

King Abdullah II couldn’t openly support the ‘deal of the century’ because he was facing threats of instability in his regime. He even got three Jordanian elites- former crown Prince Hamzah, Sharif Hassan bin Zaid- a relative of Jordan’s King and a former Minister Bassem Awadallah, arrested.

Interestingly, the Jordanian investigative report filed in the matter discloses the real issue. It stated, “Awadallah was working to promote the ‘deal of the century’ and weaken Jordan’s position and the King’s position on Palestine and the Hashemite Custodianship of Islamic and Christian holy sites in Jerusalem.”

At the end of the day, Hashemites are not as strong as a dynasty. They have always been worried about the risks of instability and coups. Therefore, they are very cautious about revealing their ties with Israel. However, Jordanian rulers do understand the need for military and economic cooperation with Israel.

Jordan, which is quite different from other Arab nations due to its status as an energy-dependent nation imports 95 per cent of its energy. Every year, the electricity demand in the country rises by 6 to 7 per cent, which means that it must find a substitute for crude oil imports. Hence, Jordan has been collaborating with Israel in an attempt to increase the amount of renewable energy that it can produce.

Jordan already imports Israeli gas, despite opposition from radical elements within the Hashemite Kingdom. Moreover, Jordan’s status as a major non-NATO US ally compels it to create a strong alliance with Israel, even if Amman cannot flaunt it.

Moreover, Jordan sees how the tide is turning in the Arab world. Countries like the UAE and Bahrain have already signed Abraham Accords with Israel, whereas Saudi Arabia looks set to sign one. Jordan is therefore ready to foster a closer relationship with Israel, however political issues won’t let Jordan talk freely about it.