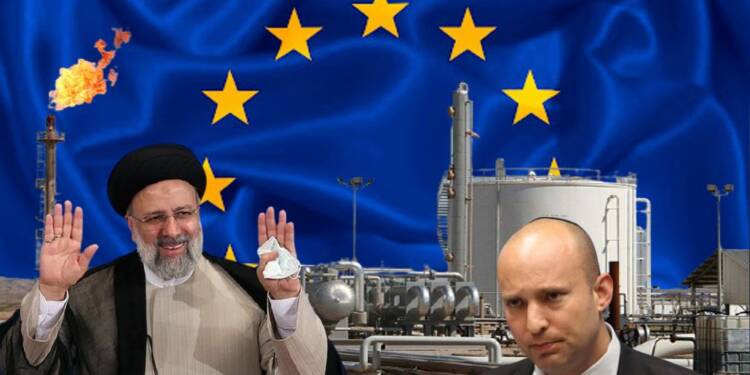 There are times when large and powerful countries try to use the veil of responsibility while they just look to maximise their profits and interests. This can happen to the closest of allies and as per the realist perspective, it makes sense. However, the recent developments of sudden diplomatic aggression from the European Union (EU) towards Israel and the easing of tensions with Iran may tell a pattern. Through these developments, we can deduce that the EU’s real concern is the continued supply of natural gas. The EU does not seem concerned by the impact of pampering Iran, which is entirely in contrast to the way in which the organisation brands itself.

On Thursday, a group of 12 EU member countries urged Israel to abandon plans for the construction of over 3000 settlement homes in the West Bank. Separately, the United Kingdom released a statement encouraging Israel to abandon plans for new settlement construction. The same countries are working with the US to take up Iran-nuclear talks, in Rome. President Joe Biden will meet with European allies today, to discuss strategies, as they seek a diplomatic solution.

Europe would not have faced this severe gas crisis today had it already signed long-term contracts with Russian suppliers. Make no mistake, Russian supplier Gazprom is fulfilling all of its existing gas commitments. The problem is that Europeans don’t want to buy gas under a long-term supply contract. Europeans think that long-term contracts would enable Moscow to wield economic leverage over the European Union and undermine the EU’s determination to rein in Russia’s geopolitical goals. Instead, the EU always preferred short-term on spot contracts with Gazprom.

The other factor that drove the EU’s strategy of pinning reliance on “just in time” contracts was the illusion that Russia lacks plentiful buyers for its gas. Thus, the bloc took Russian gas for granted, preventing it from securing long-term supplies. And now, as the organisation faces the threat of being entirely dependent on Russia for energy needs, they want to save Iran and use it for some quick natural gas.

EU’s attempts to restart the nuclear talks and the Iranian gas factor:

In line with the concern of energy dependence, the EU is currently very desperate to import gas from Iran and calling for a summit on the same. The E3 summit, which brings together the leaders of Germany, France, and the United Kingdom, comes at a critical juncture, as Iran continues to enrich uranium to near-weapons-grade levels. Biden is attempting to resurrect the 2015 nuclear deal and bring Iran back into compliance with the agreement. However, anyone who looks at the agreement practically knows, it could not have prevented Iran from developing nuclear weapons.

Also read: Iran is currently at its weakest and Israel is in the mood of a final definitive attack

In the meantime the Trans-Caspian pipeline, which would have connected Turkmenistan to Europe via the Southern Gas Corridor, remains defunct, as the Iranian projects hang in balance to date.

The placating of Iran by the EU further gets confirmed by the fact that the organisation had taken steps to anger Israel. France, Germany, Belgium, Denmark, Spain, Finland, Ireland, Italy, Norway, the Netherlands, Poland, and Sweden issued a common statement a day after the US opposed the plan, urging Israel to abandon its plans to build in the settlements.

“We call on the Israeli government to rescind its decision to move forward with plans to build about 3,000 settlement units in the West Bank”, the foreign ministries of the 12 countries said.

Iran is increasingly breaking the Joint Comprehensive Plan of Action (JCPOA), according to the United Nations’ nuclear watchdog. Former President Donald Trump pulled the United States out of the 2015 nuclear deal, but the USA now has been involved in indirect discussions to bring both Washington and Tehran back into compliance. Since June, when Iranian President Ebrahim Raisi assumed power, the Vienna discussions have been on hold.

The sudden urge of restarting the talks makes sense only when we understand the energy crisis the EU is facing. For the longest time these countries have pressured the developing countries to move away from fossil fuels. However, as soon as they find themselves in a pickle, the organisation forgets all the virtue and goes for self interest – a poor showing on part of the EU, but that is the real face of the organisation.