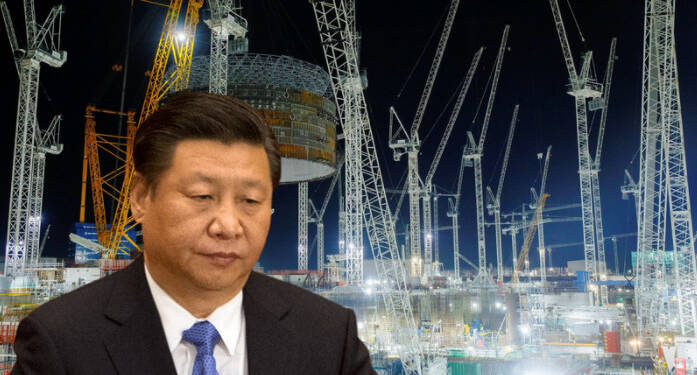 The Chinese real estate crisis is now crossing China’s borders and destroying China’s prestige and soft power in the Western world. As per Reuters, China’s property sector woes could now spell trouble for some prestigious mega-projects in top international cities like London, New York, and Sydney as the concerned developers are now scrambling for cash.

Chinese real estate giants have spent the last one decade competing with each other for building taller skyscrapers across the world. But with the ongoing debt crisis in China  and tight liquidity in Chinese real estate majors, it seems that they will have to sell their assets to meet their liabilities.

Take Shanghai-based Greenland Holdings for instance. It is in a delicate position in terms of the growing debt component in its balance sheet just like Evergrande. The real estate giant has built some major projects including Sydney’s tallest residential tower. It also plans to do the same in London and is involved in projects worth billions of dollars in some of the most high-profile cities across the world like Brooklyn, Los Angeles, Paris, and Toronto.

Greenland Holdings has promised that it will remain committed to building its flagship projects including the 235 metre-high Spire London tower. However, the stressed company recently put one of its major London sites on sale earlier this year.

Greenland Holdings is just an example, many other firms looking to sell their assets to meet short-term debt maturities. Evergrande and Kaisa Group, which had defaulted way back in 2015, are looking to sell Hong Kong buildings to get some cash for meeting their near-term liabilities. On the other hand, Oceanwide Holdings too had what was meant to be San Francisco’s tallest tower seized by disgruntled creditors.

Omotunde Lawal, head of emerging-markets corporate debt at asset manager Barings, said, “I suspect, as with anything, if you’re running into liquidity issues you start to look to sell your investment properties.”

As per Lawal, many Chinese firms had, in fact, paid over and above market rates in a mad competition to secure prime locations for building new towers. However, now that they don’t have any money left to meet upcoming liabilities, these Chinese firms are compelled to sell their overpaid assets for getting some liquidity. Lawal added, “Probably they are unlikely to get cost, so I think it depends on just how desperate they get.”

Guangzhou R&F Properties, another major Chinese property developer, has come under the scanner as it is facing a monumental cash crunch, which sums up China’s real estate crisis. The developer currently has two unfinished projects in London, one of which includes a dozen skyscrapers at a prime location next to Thames. The group also has numerous buildings in Australia, Canada, and the United States.

An R&F spokesperson claimed that the property developer remains “fully committed” to all its British projects. However, the situation is really bad because Guangzhou R&F Properties has around $8 billion of debt getting due over the next 12 months, and only $2 billion in cash handy to meet whatever liabilities it can. Worse still, sales went down nearly 30% year-on-year last month and major credit rating agencies believe that R&F will need to sell some of its investments now. Fitch estimates that the real estate group has $130 billion of assets that could get sold.

S&P too warned, “R&F’s capacity to handle its near-term debt maturities will hinge on the execution of sizable asset sales.”

The Chinese real estate sector had witnessed unprecedented and unchecked growth from 2013 to 2018, with CM developers putting over 38 billion dollars into London projects in 2018 alone. However, in the first half of 2021, they have spent only over 2 billion dollars on London projects. This is the lowest Chinese investment in the London property market since 2012.

Speaking about the Chinese real estate crisis, Chris Gore, a central London principal at real estate firm Avison Young, warned that pressure would grow on Chinese firms if the crisis keeps growing at home. Gore said, “If they needed to sell and could sell for a profit, then I think they would just sell.” He added, “There wouldn’t be a problem if a few wanted to sell, but if they all suddenly wanted to exit at the same time, they couldn’t.”

The global Chinese real estate giants have been clearly unnerved by the China Evergrande Group downfall and Beijing’s restrictions on borrowing by its real estate firms. There is a clear contagion effect on display in the Chinese property market with four developers – Modern Land China, Fantasia Holdings, Sinic Holdings, and China Properties defaulting on offshore notes. Recently, China Evergrande Group itself narrowly avoided defaulting by making a coupon payment on time.

Global rating agencies lowered the scores of a record 44 Chinese developers last month and the carnage inside the Chinese property market is now crossing its borders. Over the past several years, Beijing wanted to leave its footprint over the tallest skyscrapers in the West. However, it seems that China has actually ended up embarrassing itself and losing much of the soft power that it was trying to build up by constructing tall towers in global megacities.