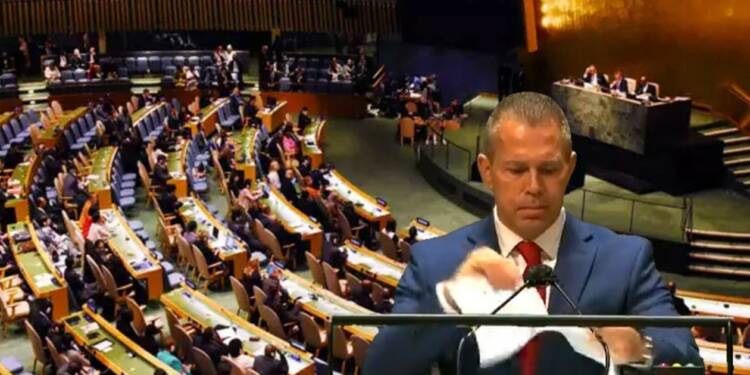 Israel’s Ambassador Gilad Erdan slams the UNHRC in the most unforgiving of ways:

While addressing the General Assembly, Gilad Erdan “spoke out against the baseless, one-sided, and outright false accusations from the Human Rights Council’s annual report.”

The senior Israeli diplomat said, “This year, the Human Rights Council has once again let us all down…. It has let down people all over the world who endure human rights abuses, every day, every hour, every minute – but their voices are not heard.”

Exposing the sheer hypocrisy and anti-Israel bias of the UNHRC, Gilad Erdan said, “Since the establishment of the council 15 years ago, it has decided to blame and condemn Israel not 10 times like Iran or 35 times like Syria….the Human Rights Council has attacked Israel with 95 resolutions. Compared to 142 against all other countries combined.”

Today, I addressed the @UN General Assembly and spoke out against the baseless, one-sided, and outright false accusations from the Human Rights Council's annual report. 1/8 pic.twitter.com/b4YIv2jGaK

Israel has since long accused the UNHRC of anti-Israel bias and refuses to cooperate with its investigators. Israel is the only country that forms a subject of systematic discussions at every UNHRC session, with a dedicated special agenda item.

Israel’s Ambassador Gilad Erdan to the United Nations too said, “Sadly, the voices of the oppressed cannot be heard because the Human Rights Council (UNHRC) is insistent on wasting its time, its budget & its resources targeting one country, my country, a free and flourishing democracy with a free press, freedom of worship and freedom of expression.”

Gilad Erdan added, “The State of Israel always has, and always will, provide vital aid to the countless nations in need. Nevertheless, Israel is the country, the Jewish country that the Human Rights Council decides to continue to bash with its hateful anti-Israel and antisemitic rants.”

UNHRC’s antisemitism and sheer bias against Israel was the reason why former US President Donald Trump decided to leave the Council. His successor US President Joe Biden has gone soft on UNHRC and has returned the United States to the fold as an observer, but his administration too criticises the UN Council’s “disproportionate focus on Israel.”

Earlier this month, United States Ambassador to the United Nations Linda Thomas-Greenfield said, “This council spends a great deal of time on the Israeli-Palestinian conflict, which is both understandable and consistent with the agenda. But far too often, the substance of these discussions is centered almost entirely around criticism of Israel and counterattacks.”

She added, “I sincerely hope that going forward, council members will do their best to take a more balanced approach. Also, there are other countries and situations in the region that merit Security Council attention and should not be neglected.”

The Israeli diplomat added, “It was on this stage at this very body that the very right of the Jewish people to have a national home was itself declared to be racist. A decision that was justly over-turned. A decision that Israel’s Ambassador at the time, Chaim Herzog, tore up before the United Nations.”

In a bid to condemn UNHRC’s nefarious agenda against Israel and its culture of pushing a poisonous narrative against Israel, Gilad Erdan said, “So to, the Human Rights Council’s obsessive anti-Israel bias, embodied, once again, by this report, should have no place in any body concerned with human rights, security or peace. It’s only place is in the dustbin of antisemitism, and that is exactly how we shall treat it.”

Israel has thus ripped apart the United Nations’ one-sided and antisemitic agenda, which has been at the forefront of a global anti-Jew campaign led by vested interests against Israel.