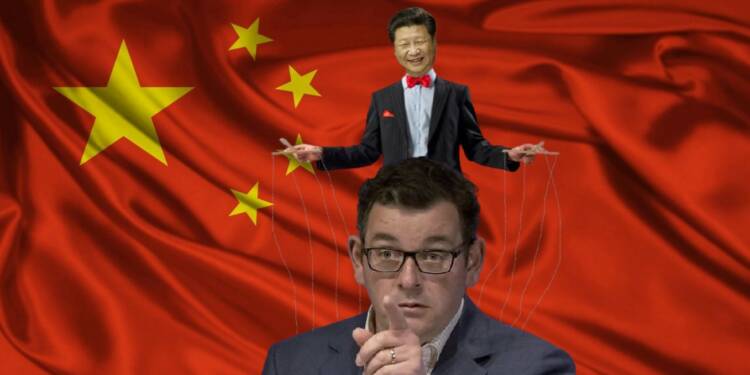 The biggest threats to a nation are not always its adversaries, but sometimes these are some of its very own citizens, who are willing to compromise their whole nation for their selfish agendas. In the case of Australia, Victoria’s governor Dan Andrews is the embodiment of the very internal threat, as he has time and again shamelessly cooperated with the Chinese Communist Party even when the whole of Australia was standing up against Beijing’s belligerence. Dan Andrews has paid for scores of Victorian businesses to attend a big trade expo in China that was boycotted by the federal government.

After earlier signing on to Beijing’s Belt and Road development initiative, the Victorian governor defied Scott Morrison’s China policy for the second time. Under new veto powers, Foreign Minister Marise Payne cancelled the deal earlier this year, claiming that signing a $1.5 trillion pact with China was not in Australia’s national interest. These actions by Victoria’s governor compromise with the overall policy direction of the Australian government. The fact that even after Beijing tried to inflict immense damage on the Australian exports market and the common Australian people, he is still working hand in gloves with the Chinese Communist Party.

The earlier attempt to compromise the federal government

The Victoria Belt and Road agreement had been cancelled by Canberra amidst an intense diplomatic face-off between China and Australia. In response, Wang Xining, the deputy head of the Chinese embassy in Canberra, accused the Australian government of “conniving with the United States in a very unethical, illegal, immoral suppression” of the Chinese telecom giant Huawei.

Dan Andrews is at it again

The federal government will also be absent at the China International Import Expo, which began on Friday and encourages Australian businesses to seek out new markets. Despite federal objections, the Victorian government subsidized the costs of dozens of enterprises exhibiting at the trade expo. ‘Our participation at the Expo is assisting Victorian businesses in connecting with critical markets in order to gain new contracts and grow jobs,’ according to a Victorian Government spokesman.

As part of a massive commerce drive into China, the Victorian Government has its own stall, which is emblazoned with its official emblems. Mr Dan Andrews also commissioned Vic House, a new facility in Shanghai that opened just a few weeks ago, to enable stronger trade connections.

In a briefing with China-focused enterprises, Federal Trade Minister Dan Tehan stated that the federal government wished to take a “whole of nation” approach to interactions with the country. ‘Team Australia – working together between the Australian government and Australian business – has never been more crucial,’ he told the companies. However, these actions by Victoria’s governor end up hurting the Australian federal government itself, as he consistently furthers China’s agenda in Australia.

Senator Sarah Henderson of the Liberal Party has criticized Victorian Labor leader Daniel Andrews for the “insidious Belt and Road pact” with the Chinese Communist Party, which she described as “bad for Australia.” Senator Henderson told Sky News that the Belt and Road pact was “bad for Victoria” because it prioritized Chinese employment ahead of Australian jobs. However, even in the face of all this criticism, Dan Andrews has continued his efforts to work in line with the aims and objectives of CCP. This is why such a person, is a threat to the national security and sovereignty of Australia and will continue to be a threat as long as he holds the significant office of the governor of Victoria.