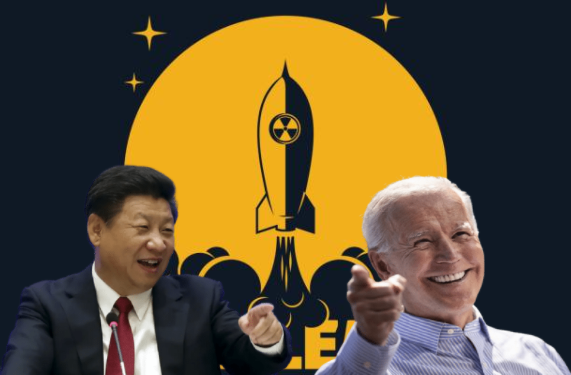 The position of the US as a great power is already diminishing under the astonishingly compromised leadership of Joe Biden. In such a situation, helping China gain a strategic advantage does not help at all. The Biden Administration is currently conducting a Nuclear Posture Review, expected to be completed in the coming months. According to Washington and other foreign capitals, significant changes may be on the way. Last month the Financial Times reported that NATO countries, Japan and Australia were pressing the U.S. not to abandon its long-standing ambiguity on nuclear-weapons use.

If Joe Biden reduces America’s nuclear deterrent by implementing a “no first use” policy or something similar, the strategic harm to the US may be worse, and the White House will have no one to blame but itself. The Trump administration’s 2018 “declaratory policy” stated that the United States reserves the right to use nuclear weapons not only in the event of a nuclear attack but also in “extreme circumstances” involving “significant non-nuclear strategic attacks,” such as those involving chemical or biological weapons. As long as the United States has been a nuclear power, this has been its policy. However, the suggested shift is like giving the position of the world’s number one power to China on a platter.

The case for a “no first use” or “sole purpose” declaration is that it will encourage rogue states to follow the idealistic example of US arms-control proponents and reduce their nuclear arsenals. That was always a stretch, and believing it in today’s strategic context would be insane. The United States’ conventional military advantage in Asia has been diminished, if not eliminated, as a result of China’s arms development. This year, Mr Blinken again warned of “the rapid expansion of the PRC’s nuclear arsenal.” Beijing is “heading to a launch-on-warning (LOW) posture with an increased silo-based [nuclear] force,” according to a recent Pentagon analysis.

“Russia’s notion that restricted nuclear first use, potentially involving low-yield bombs,” according to the Trump administration’s 2018 study (cited in the WaPo report), can provide a “coercive advantage in crises and at lower stages of combat.” Russia has massed troops around the Ukrainian border once more. If the US foregoes even limited nuclear options, America’s great-power enemies will be encouraged to escalate. While these may be the concerns of the USA’s European allies, the larger threat looms on its Asian and Indo-Pacific allies.

The consequences would be seen throughout Europe and Asia, as U.S. allies rethink America’s position and China and Russia vie for advantage with their renewed confidence in the likelihood of escalation. A geopolitical maelstrom would ensue if America’s nuclear umbrella was folded.

The USA is already ranking lower to the Chinese military prowess in the East Asia region, which when coupled with the fact that China overpowers the US in short and medium-range missiles, creates the perfect danger for Taiwan and other US alliance, partners. In such a scenario, giving up the only workable deterrent that you have, goes on to show the depths of stupidity

Earlier, Meng Wanzhou, Huawei’s top financial officer and the company’s founder’s daughter, was granted bail in a Vancouver court hearing, just hours after US prosecutors revealed a deal in New York. She then swiftly boarded a flight to Shenzhen, returning to China for the first time since being apprehended at the request of US authorities in Vancouver’s international airport in 2018. Since then, she has been under house arrest, with a private security company monitoring her, as part of her bail deal.

Also read: Biden-Trudeau kneel before Xi Jinping as Meng Wanzhou has been released

While Meng’s case will be postponed until December of next year, after which it would be dismissed totally if she meets her responsibilities, how she has been sent back to China goes on to show how Joe Biden and Justin Trudeau have kneeled before Xi Jinping. One of those responsibilities was to not contradict a statement of facts she signed as part of the bargain while retaining her ‘not guilty’ plea or to pretend that she signed it inadvertently. The US Department of Justice will subsequently drop its extradition proceedings against her, and her lawyer, David Kessler, has requested that she be released on bail.

These steps may look stupid but not severe when looked at individually. However, if one tries to understand the extent of damage that they incur combined, they too would be concerned about the possibility of the continuance of the current world order.