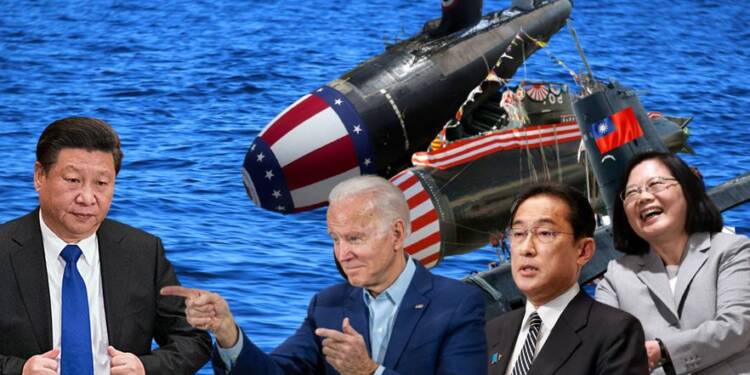 The South China Sea is one of the richest maritime routes in the world. With an annual trade value of $3.37 trillion, the hotly contested maritime region accounts for a third of the global maritime trade. This is why China wants exclusivity in the entire region- 80 percent of China’s energy imports and 39.5 percent of the total Chinese trade passes through this hotly contested region. It is also a major source of fish feeding several nations, and has all the oil and natural resources to go to war for. With such high stakes involved in the South China Sea, many parties are getting involved in the region which could now become the centre of a big fight involving some of the fiercest military powers.

The South China Sea has remained tense for the past several years with China bullying around other stakeholders in the region like Brunei, Malaysia, the Philippines, Taiwan and Vietnam. And now, the region is heating up with Japanese, Taiwanese and American submarines prowling in the hotly contested region in a bid to push back against Chinese belligerence.

You would have heard about the South China Sea disputes many times. Well, let me explain exactly is the nature of disputes in the hotly contested maritime region.

The South China Sea has many disputed islands and maritime areas claimed by several sovereign nations in the region like China, Taiwan, Brunei, Malaysia and Vietnam. While the disputes are of a multilateral character, Chinese belligerence is the main concern.

What Beijing wants to do is to pursue its “nine-dash line” theory in the South China Sea, which encircles as much as 90 per cent of the disputed waterways running as far as 2,000 kilometres from mainland China.

China’s own claims exceed far beyond the permitted limits prescribed by the UN Convention on the Law of the Sea, and go deep into the Exclusive Economic Zones (EEZs) of other countries- a serious violation of the Convention.

Beijing doesn’t even respect the International Court of Justice (ICJ) ruling in the South China Sea and the Jinping regime maintains that China’s ‘territorial sovereignty and marine rights’ which Beijing defines for itself are not affected.

Since early 2020, China has been trying to assert its claims in the South China Sea region. The Chinese Navy, Coast Guard and fishing militias often end up bullying other countries like Vietnam, Brunei, Malaysia and the Philippines. In this context, both the US and Japan have been ramping up their naval activity in the sensitive maritime region in a bid to back Southeast Asian nations against Chinese bullying.

Now, the US and Japan have started confronting China even more boldly. The Japan Maritime Self-Defense Force (JMSDF) has disclosed that it conducted a joint submarine drill with the US Navy in the South China Sea on Tuesday. This was the first time that Japan sent a submarine to take part in such an exercise.

Apart from the submarine, the exercise also involved two destroyers and one patrol plane from Japan. The US too sent destroyer USS Milius (DDG-69) and a U.S. Navy P-8A maritime patrol aircraft for the joint drill with Japan. The exercise reportedly included anti-submarine training by tracking a submarine navigating underwater.

Meanwhile, the Taiwanese Navy too has reportedly deployed one of its two most advanced submarines in the disputed Spratly Islands in the South China Sea.

The report doesn’t clarify the timeline of its submarine deployment, but since the defense report is for 2021, observers say that the drills are likely to have been conducted within the last 12 months.

Other countries getting involved in the South China Sea

Japan and the US remain the main Indo-Pacific powers interested in the South China Sea. However, other military powers too are confronting Chinese expansionism. France, for example, has been expanding its naval activity in the region by routinely dispatching warships to the disputed region. Germany too is cementing its defence ties with Tokyo and even sent its frigate Bayern to Japan after 2 days of joint drill with the Japanese Maritime Self-Defense Force destroyer Samidare in the Pacific Ocean.

Amongst the Quad members, Australia and India too are backing up the larger efforts to contain China. Australian Defence Minister Peter Dutton recently said that Canberra would aid the US in defending Taiwan if China attacked the island nation.

India too is very clear about linking the ongoing border tensions with China in the Himalayas with the South China Sea. Over the past one year or so, India has shown a tendency of sending its naval assets to the South China Sea and coordinating with like-minded countries in the region, whenever border tensions heat up between New Delhi and Beijing.

If things get down to a clash involving China and any of the like-minded powers in the South China Sea, countries like India and Australia are likely to get involved. This adds up to the amount of pressure being already exerted on China by the US and Japan. In fact, submarines getting active in the South China Sea, there are all signs of a big fight about to break out in these disputed waters.

Is the US all set to get a new Vice President?