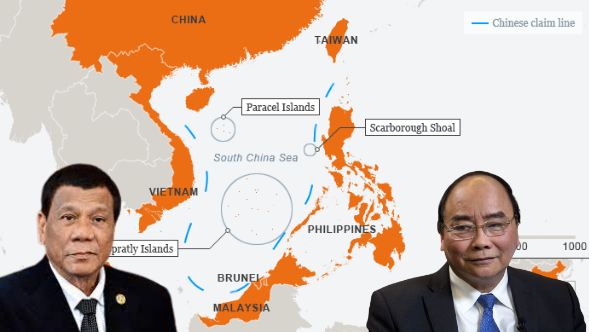 One and one make eleven. Who knows it better than Vietnam and the Philippines that have now come together to jointly stymie China’s efforts to lay siege on the entire South China Sea.

With the US’ Joe Biden administration at its weakest and ASEAN in its pockets, China is feeling more emboldened than ever to usurp the hotly contested waters. Chinese foreign minister on Sunday minced no words in telling 10 diplomats from ASEAN member nations that countries willingly accepting China’s code of conduct in the South China Sea will be inundated with free vaccines and other benefits from Beijing.

This year, China is celebrating the 30th anniversary of China becoming a dialogue partner in ASEAN and wants to use this opportunity to shove a China-penned code of conduct down the throats of comparatively tiny Southeast Asian nations. However, two of China’s biggest ferocious neighbours, Vietnam and the Philippines have now seemingly made it a point to make China taste its poison by re-launching a joint marine scientific research expedition (JOMSRE) in the China-claimed South China Sea.

Vietnam and the Philippines launch JOMSRE to impede China’s efforts

Under the JOMSRE framework, the two countries are expected to launch initiatives for science-based cooperation particularly on marine scientific research, marine environment protection, and hydrometeorology. This means that both nations have come together to take on China’s fishing militia invasion and devise ways to undertake joint drill operations in the South China Sea.

The JOMSRE was initiated by the Philippines and Vietnam in 1994 as a confidence-building activity in the South China Sea. The bilateral cooperation was renewed three times up until 2006. During a conference in Halong in March 2008, China also showed its willingness to join the initiative. After 3 preparatory meetings, further meetings were suspended for political reasons and the Phase 2 JOMSRE-SCS project was stopped.

Before that; China, Vietnam and the Philippines had also agreed to launch a trilateral exploration program to undertake joint research activities in the region back in 2005. However, the arrangement fell apart after the Philippines’ departure. Manila alleged the agreement was too focused on maritime space under its jurisdiction.

Experts warn China may try to sabotage the initiative

This makes it abundantly clear how Vietnam and the Philippines have always looked askance upon China’s intentions in the region and found it arduous to successfully cooperate on the South China Sea issue. But since the JOMSRE is up and running again, experts fear that China may again attempt to sabotage the joint efforts of Vietnam and the Philippines to keep its interests afloat in the region.

Maritime law expert Dr Jay Batongbacal said the revival of JOMSRE was important because it displays closer cooperation and coordination between the two countries on matters of common interest. Dr Jay also warned that China would probably demand to be a part of this arrangement again.

Vietnam, under the leadership of President Nguyen Xuan Phuc, has made it a foreign policy priority to embarrass China on the World stage. On the other hand, the Philippines has grown more confrontational than ever to stand up against Chinese belligerence in the region. With its China dovish leader President Rodrigo Duterte looking ahead to hang his boots after six years in office next year, the Philippine military has seemingly taken full control of the affairs in Manila.

And a frustrated China is left with no option other than deploying its intimidating measures to keep the Philippines from engaging in such activities detrimental to China’s interests. China on Tuesday brazenly attacked two Manila supply boats on their way to a Philippine-controlled atoll in the South China Sea. Three Chinese coast guard vessels blocked their way and used water cannons to deter them from supplying food items to military personnel stationed on the China-claimed islands.

Read More: It’s official – Duterte has been cut to size and China Hawk Philippine Military is in full control

Make no mistake, Vietnam and the Philippines are China’s two closest neighbours who are now being driven by the most ferocious anti-China powers. And if the revival of JOMSRE in the face of China attempting to impose a predatory code of conduct in the South China Sea is any indication, China’s journey of annexing the South China Sea in its entirety may very well prove highly perilous for an overly ambitious Chinese president Xi Jinping.