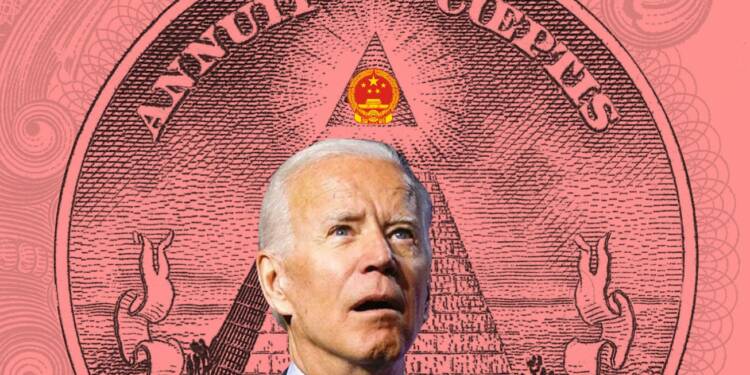 It is a highly improbable possibility that anyone would have reservations when the Bureaucracies world over are criticised for their contribution in slowing the efficacy of actions taken by a democracy. However, it is also a possibility that the very bureaucracy can become a tool for jeopardizing national interest if the right set of people get hold of it. In the case of the USA, the bureaucracy is being compromised by the American deep state and it is also impacting the futuristic weapons programme. While one cannot conclusively say that the deep state is colluding with the Chinese Communist Party, one thing is very clear, that the actions of the deep state are working out to be in favour of Beijing.

According to a new report from the Financial Times, a Chinese hypersonic weapons system tested in July supposedly launched a second missile while travelling at five times the speed of sound. It’s still unclear whether the second missile was an air-to-air missile or a decoy used to keep the weapon from being destroyed. Experts believe that such technology has the potential to leapfrog American and Russian technologies, giving the Chinese Communist Party (CCP) and its military a strategic advantage in the event of a war.

But given the defence budget of the USA and the amount of money and resources that Washington D.C. spends on Military technological research and development, one cannot make sense of these developments. However, what if we tell you that the deep state has its blessings on the very bureaucracy that is making sure that the US loses the battle of futuristic weapons.

Following China’s test of a hypersonic missile, the second most senior US general stated Thursday that China’s military growth is “striking,” while US development is hampered by “brutal” bureaucracy. General John Hyten, the outgoing Vice Chairman of the Joint Chiefs of Staff, backed Secretary of Defense Lloyd Austin’s assessment of China as a “pacing threat,” while describing Russia as the greatest immediate concern.

“Calling China a pacing threat is a useful term because the pace at which China is progressing is stunning,” Hyten told reporters at a roundtable hosted by the Defense Writers Group last month. “The pace they’re moving and the trajectory they’re on will surpass Russia and the United States if we don’t do something to change it. It will happen. So I think we have to do something.” Hyten who has retired this month stated that whoever succeeds him should focus on speed and re-inserting speed back in the process of the Pentagon. Hyten previously served as commander of US Strategic Command, where he was in charge of the nation’s nuclear stockpile and monitored strategic threats to the United States, it must have provided him immeasurable insight into the functioning of the deep state.

“Although we’re making marginal progress, the Department of Defense is still unbelievably bureaucratic and slow,” Hyten added. He interestingly pushed the point that the US needs to go fast if it wants to but the bureaucracy has been the biggest hurdle.

In such a background U.S. Space Operations Vice Chief David Thompson said that the U.S. hypersonic weapons are currently “not as advanced” as those of China and Russia. At the Halifax International Security Forum in Canada on Nov. 20, as per reports, Thompson acknowledged that Russia and China being ahead of the United States in hypersonic missile development complicates the “principle of strategic warning” because it makes it difficult to pinpoint the target of the missile and activate warning systems.

While it is obvious that the bureaucrats themselves cannot act so efficiently against a weapons programme, the involvement of the deep-state clears all the doubts. While the deep-state may have its own interests, but there is no denying that its actions are helping countries like China. And as China can manage the American deep state for its agendas, the US is fast losing its military advantage over China.