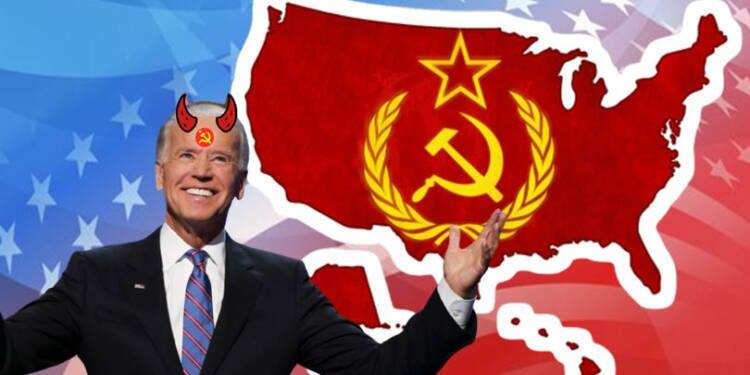 The USA has long prided itself as being the success story of the capitalist model of governance, however, the seasonal romance of the youth with socialism has transformed it into a solid block that supports Marxism and communism. While the proponents of this ideology have mellowed down their definition of communism with words like democratic socialism or neo-capitalism with human characteristics, these play of words have kept the average American ignorant about the tectonic shift that the Democrats have brought to the USA. In reality, approximately half of America has already turned communist.

The policies of the Biden administration and the kind of sections of civil society it is supporting are enough evidence to prove the point. But, recently a famous Chinese dissenter has confessed his belief that the US in many ways has entered a phase of authoritarianism, and stated that the US is already an authoritarian state in many ways.

Couple this observation with the policies of most of the democrat states, and we get a perfect communist concoction. Be it the Critical Race Theory (CRT), the policy direction of taxing the rich, ostracising any and every opinion and viewpoint that does not stand in congruence with the left-liberal cabal among others, are telltale signs of a country turning into a communist state.

Socialism a transitory stage towards communism:

The United States is on the same slow and steady path as China, USSR, North Korea, Cuba, and other authoritarian countries – towards a communist society. Many in academia, the media, and politics have sought to indoctrinate our young people and others with the concept that socialism is humanitarian and that law equalises everyone’s life outcomes.

“The goal of socialism is communism,” Lenin famously said. Communism is inextricably linked to socialism. People’s rights are gradually eroded until all that is left is a despotic, totalitarian state with complete control over the populace. “Political correctness” is used by socialism to destroy basic moral discernment, and force everyone to be the same. While one may want to laugh it off as light humour, it is a fact that half of the country under the Democrats‘ rule, is already a communist state. No one can have a different view than what is being preached with a shine on mainstream media as well as what the stage performers from Hollywood are preaching.

Young America is buying the false romanticism of communism:

The young people are being forced fed the propaganda about converging risks of inequality, climatic calamities, police brutality, and fascism. Democrats have created an atmosphere where the young generation, unaware of the brutalities of the communist governments across the world, are finding communism and socialism to be better alternatives to what was once seen as un-American and even deadly. The “Red Scare” has passed, according to anti-capitalist groups in Michigan, and calls for social justice and economic reform are rekindling America’s long association with extreme leftist movements.

Anti-capitalist groups see an opportunity to capitalise on public frustration with American business as usual. According to Pew Research, 47% of Americans say the political system needs major reforms, while 18% want complete transformation. The poll was conducted between November 10 and December 7, 2020. For the first time in a decade, Gallup showed that Democrats had a more positive view of socialism than they do of capitalism. The fact that a dispensation that has a set of people who view socialism more favourably than capitalism and controls almost half of the country’s population and its position on issues, gives a solid idea of how much of the country has already turned into a communist state.

Also read: Outspoken Parents will be categorized as domestic terrorists in Biden’s USA

The fact that the people in the USA are facing unprecedented crises when it comes to inflation and scarcity of goods even as the festive season arrives and even then are not able to express their issues overtly, lays bare the reality of a once capitalist USA. The fact remains that the US administration’s willingness to label citizens who criticise the Biden administration’s policies as domestic terrorists, has a striking resemblance to how the Gestapo treated Jews and how Stalin treated political opponents.

The witch hunt against any form of dissent or expression of the difference of opinions looks equivalent to how authoritarian and communist regimes operated in the past, and even now. The NSBA (National School Boards Association) memo, dated October 12, raises major doubts about whether Attorney General Merrick Garland was asked by the White House to have the FBI investigate conflicts and other occurrences at local school board meetings across the United States.

Ai Weiwei, a Chinese dissenter and artist, in an interview, has warned that political correctness is beginning to resemble Mao Zedong’s terrible Cultural Revolution in China. “If you are authoritarian, you have to have a system supporting you. You cannot just be an authoritarian by yourself. But certainly, in the United States, with today’s condition, you can easily have an authoritarian. In many ways, you’re already in an authoritarian state. You just don’t know it,” Weiwei said. These comments add to the already elaborated observation of how half of the country has already turned communist.