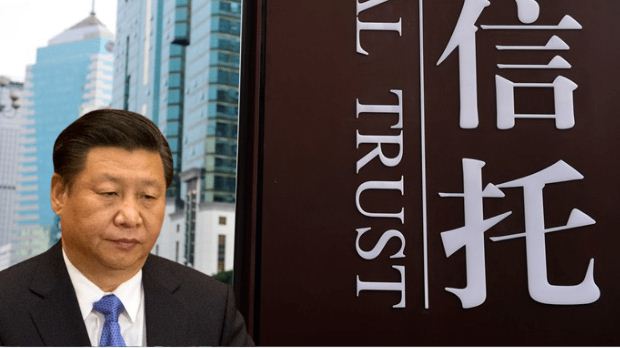 The Chinese real estate sector has grown out as a giant slayer of Chinese investors, and the Chinese trust industry worth a whopping $3 trillion is the latest one to bear the brunt of China’s devastated economy.

What are Chinese trust companies?

Don’t be mistaken, Chinese trust companies are in no manner similar to those we see in the West. Chinese companies are more involved in the shady part of the financial sector, also called Shadow Banking.

They can do what a bank can’t. Banks are restricted from making certain investments, but such conditions don’t apply to trust companies. They can even invest in high-risk companies. Similarly, financial institutions seeking to make under the table off-balance-sheet investments also find it convenient to invest in such trust companies.

So, these Chinese trust companies bear the investment risk themselves and invest in a wide range of assets including, bonds, stocks, unlisted companies and local government financing vehicles. Now, experts believe that out of $2.5 trillion in money entrusted to trust companies, 13% to 15% goes straight to China’s real estate sector.

Annual reports of trust firms show that by the end of 2020, property investments accounted for more than 50% of a few trust firms’ businesses.

So, as China’s real estate sector seems to be living on borrowed lungs, China’s trust companies have also started gasping of late. The fall of real estate giant Evergrande came as a turning point for the trust industry, with some trust products that had invested in the developer running default by the end of October, including those of Citic Trust, The National Trust, China Minsheng Trust and Everbright Xinglong Trust.

The turmoil in the real estate sector has sent the trust industry into a tizzy. Huge losses are being reported and investors are being told to wait longer to get interest.

Why downsizing of the trust business is a sign of imminent tragedy?

But, what does this downsizing of China’s trust industry mean for the Chinese economy? Well, the data speaks for itself. China’s trust industry has remained the backbone of China’s real estate sector. About 70% to 80% of the conduit business, or the business done on the behalf of some other investor through these shady trust companies, involve the sale or purchase of some kind of property.

The real estate sector contributes 25% to 30% of the Chinese economy, and trust companies have remained the biggest contributor to the sector.

Expectedly, trust companies are now taking the first way out of the turbulent sector in the quest to park their money in safer assets. And that’s only going to make things worse for the already-battered Chinese economy.

Hence, to stave off the intensifying crisis, China is now pressing its traditional banks to lend more money to developers to paint a rosy picture of China’s economy.

Reuters reported on Monday that financial regulators in China have told the banks to specifically accelerate approval of loans to develop projects and to ensure that outstanding loans to project development show positive growth in their loan books in November as compared with October.

Accelerating house-building activities is a low-hanging fruit that China exploits routinely to keep its economy up and running. By asking banks to invest more in China’s crawling real estate sector, China risks losing whatever it is left with.

Xi Jinping is ready to orchestrate another housing boom in China to shore up China’s fast-plummeting economy. This only shows how short-sighted China’s President Xi Jinping is. The short-term gain, long term pain strategy deployed by the Jinping administration to tackle the real estate sector catastrophe is truly a textbook example of how a nation should not behave in times of crisis.