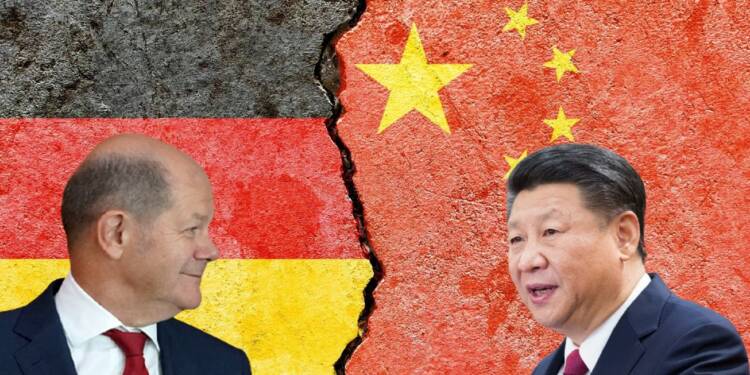 No one country has betrayed its brethren as Germany has done under the long rule of Chancellor Angela Merkel. As she leaves office, new revelations show how Berlin gave crucial submarines and destroyers technology to the Chinese Communist Party and the People’s Liberation Army, without letting the EU member nations get a hint of the same. While the policy under Angela Merkel was compromised beyond belief in favour of a communist authoritarian state, but the way in which the new coalition is shaping up goes on to show that things are going to take a 180-degree turn. The next German administration will not view China through Angela Merkel’s business-first prism.

The three parties aiming to create a new administration presented a coalition agreement. The 178-page paper includes 12 references to “China,” only a couple of which will please Beijing. Taiwan, Hong Kong, and Xinjiang are all mentioned, as is Germany’s new government’s call for stronger EU-wide and transatlantic cooperation. Increased cooperation with Japan and Australia, two of China’s main regional adversaries, will also be pursued.

There is almost no enthusiasm for the EU-China investment treaty, which was hurried through a year ago largely due to Merkel’s efforts. The message is clear: Merkel’s pro-China policy, which has been a hallmark of her thinking for the past 16 years, may soon be a thing of the past.

The policy shift towards China, and Berlin’s recognition of Beijing as an enemy:

The policy document, which will take effect when the new government takes office next month, represents a departure from Angela Merkel’s approach to Beijing and aligns Europe’s largest economy with the Biden administration. In a Twitter post, Janka Oertel, director of the Asia programme at the European Council of Foreign Relations in Berlin, described the shift in tone as “striking” and a “much-needed reality adjustment.”

As reported by POLITICO, many of the references touch on Beijing’s so-called “red lines,” such as China’s Communist Party’s claim to the democratic island of Taiwan, which it has never ruled. Countries with diplomatic connections to Beijing are required under the one-China policy not to recognise the government in Taipei, which has been excluded from the United Nations since 1971. The coalition agreement lays out measures to strengthen ties with Japan, South Korea, Australia, New Zealand, and India as part of a nascent Indo-Pacific policy aimed at asserting German interests in China’s backyard. It singles out Xinjiang as a human rights hotspot and urges China to stick to the “one country, two systems” approach when it comes to Hong Kong.

Read more: Germany gave crucial submarines and destroyers tech to China right under the nose of the EU

It expects China to play “a responsible role for peace and stability in its region” and supports the use of international law to resolve issues in the South and East China Seas. “Any change in the status quo in the Taiwan Strait can only be addressed peacefully and with mutual consent,” it continues.

Germany’s new Finance Minister and his history of anti-CCP stance:

While the complete list of ministerial positions has yet to be released, FDP leader Christian Lindner, 42, is expected to take over the finance ministry. This should come as a scare to the CCP.

As per reports, he was on the streets of Hong Kong just two years ago, meeting with pro-democracy MPs (before they were imprisoned) and launching a new think tank. Officials cancelled two full days of meetings with him when he arrived in Beijing a few days later, citing his support for anti-China protests. According to Der Spiegel, Guo Yezhou was one of the few people he met in Beijing. Guo reportedly “berated” him and asked how he would react if protestors seized government buildings in North Rhine-Westphalia as vice-chairman of the Chinese Communist Party’s International Liaison Department. (To which he responded that this occurred in 2017, and government policy was altered in response to demonstrators’ demands on university costs.)

Even as recently as early this year, Lindner has remained outspoken on Hong Kong problems. He has often chastised Merkel for being silent on the fate of student demonstrator Joshua Wong. When 50 opposition activists were imprisoned under the national security bill in January, he tweeted that Germans “are not allowed to look away.” “With Biden, the EU should discuss a common China approach,” he said. He now has the opportunity to demonstrate that it is possible.

The new coalition government has realised the realities and are not bound by any historical choices which may force them to reinforce their relations with China just to prove that they were on the right track all along, a legacy that weighed heavily on Angela Merkel in her last days in the office. The new policy shift towards China has not gone down well in Beijing. China has warned Germany’s incoming coalition against interfering in its domestic affairs, implying that relations could be jeopardised until Berlin recognises Taiwan’s claim under the so-called one-China policy.