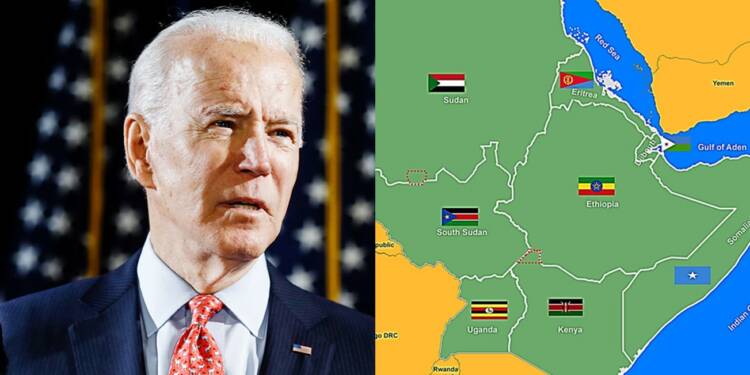 The U.S. has significantly lost its edge over the Horn of Africa which has become highly contested with almost all major powers trying to control the corridor between the East and the West. Under Joe Biden, the US is following the Obama blueprint of Arab spring, to destabilise the region and spur it into a season of civil wars allowing it to gain hold of the strategic Horn of Africa. While its earlier attempts have been failing in the face of a combine of Djibouti, Eritrea and Ethiopia which stalled any adventurism from the US, the Biden administration has come up with another plan, this time it has approached Sudan.

As per reports, the US has appointed an ambassador to Sudan for the first time in 25 years, after Washington upgraded its diplomatic representation with Khartoum from chargé d’affaires to ambassador. While Sudan has stayed away from the current crisis in Ethiopia, this action by the USA just after the short-lived military coup in Sudan tells us how Washington is making use of Sudan to fulfil its agenda, after being denied passage by Djibouti for an intended attack on the elected government of Ethiopia.

After being denied by Djibouti, US looks at Sudan for assistance:

Washington was considering using its base in Djibouti to launch attacks on Ethiopian forces and assist the TPLF in its endeavour to capture the capital city of Addis Ababa. But Djibouti denied the US to use its territories for assault on other countries leaving Washington embarrassed. In such a situation engaging Sudan, another neighbour of Ethiopia with a history of conflict between tribes in the two nations into supporting TPLF is a lucrative proposition.

Given the history of tribal enmities at the bordering regions of Ethiopia and Sudan, with tribes like Amhara, Omoro and Tigray having a history of conflict dating back decades, Sudan provides a strategically advantageous position. It can force Ethiopia into an uncomfortable two-front war situation forcing it to divide attention between Sudan on its North-west and TPLF in the north.

If there was still any doubt left, the U.S.’ commander of Combined Joint Task Force-Horn of Africa, General William L. Zana has also confirmed the U.S. was looking to intervene in Ethiopia if the situation worsens. However, the transition of Sudan from a non-entity to now actively engaging in the region needs scrutiny.

The Coup that changed the regional dynamics:

Sudan faced a coup that was unusually very short-lived, and if the reports are to be believed as soon as the military and the government reached an understanding the coup was reversed. While the exact translation between the two parties cannot be specified, it is a fact that the policy of Sudan towards Ethiopia changed leading to skirmishes and an increase in humanitarian assistance to the TPLF. Things became clear with the sudden US appointment of an Ambassador to Sudan after 25 years.

This is the definition of a transactional relationship, as the military intervention has most probably forced this change of heart. While the Sudanese military will get weapons and equipment from the US, Washington will be able to ensure that the Ethiopian government weakened, and subsequently send the country and the region into a never-ending cycle of tribal civil war.

The TPLF, Sudan and Oromo Liberation Army combine a counter to the Ethiopia-Eritrea alliance:

The Sudanese involvement from the northwest as well as its support to the TPLF and Oromo Liberation Army, another militant armed group of one of the largest tribes in the region will create a situation where it will become difficult for Ethiopian forces to hold the ground. While the Ethiopia and Eritrea combine was making headwinds in countering the TPLF, the US which wants to control the Horn of Africa cannot accept these developments and has acted to reverse the trends.

The friendly relations between Eritrea and Ethiopia are what stands in the way of the TPLF from defeating the government forces and this was the reason for the US sanctioning the Eritrean army too. Now as the US sets up its base in Sudan, it will be able to supply arms and ammunitions to the TPLF and other regional tribal armed militias like OLA to resist Ethiopia’s attempt to keep the country together. And if things escalate further, the US could even use Sudan to launch strikes on the Ethiopian government and break up the nation as we know it. So, the Biden administration is clearly itching to go to war in Africa, but will the American people allow it this time?