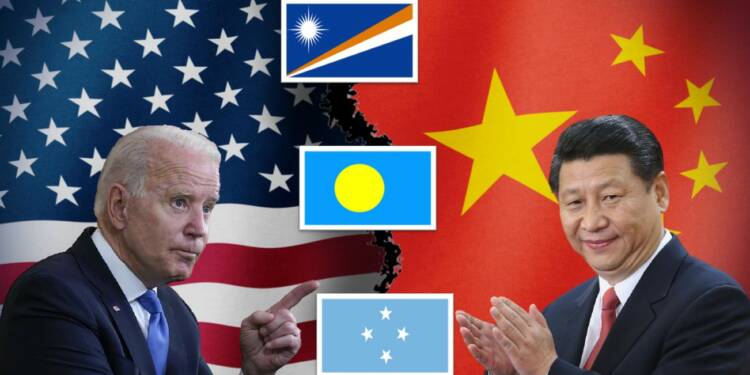 It is often said that a country should choose its fights carefully, as some fights tend to spiral out of control becoming increasingly counterproductive. And whenever there is a squabble among long-standing allies, the larger partner should be pragmatic and compromise for the larger geopolitical interests. However, it seems that Joe Biden and his administration do not follow this maxim. The Biden administration is not willing to work with the Marshall Islands which has long been a staunch American ally for decades and instead engage in petty squabbling. These confrontations with its long-standing ally can give China the negotiating space to replace the US, given Beijing’s obvious intentions in Micronesia and Polynesia.

Because of its strategic location in the middle of the Pacific Ocean, the Marshall Islands have become a major military base for the United States and provide Washington with the strategic edge in the region. But, amid disagreements with Washington over the terms of its “Compact of Free Association,” which is set to expire soon, the allegiance and long-standing friendship is being put to the test. The United States has refused to negotiate with the Marshallese over claims for environmental and health harm resulting from dozens of nuclear tests conducted in the 1940s and 1950s, including a massive thermonuclear detonation on Bikini Atoll.

As per AP, the dispute has some U.S. lawmakers worried that China might be willing to step into the breach, adding to a bruising competition for geopolitical dominance between the two superpowers.

History of good relations between the island nation and the US:

As a result, the Marshall Islands’ economy has benefited from US money and jobs. Thousands of Marshallese have moved to Arkansas, Hawaii, and Oklahoma to take advantage of their ability to live and work in the United States.

The tragic Nuclear Tests by the US on the Marshall Islands:

The United States began testing atomic weapons in Bikini Atoll, 125 miles west of Rongelap, in 1946. The tests, dubbed Operation Crossroads, were relocated from the United States to the islands because officials worried “radioactive debris could not be properly confined at any site in the United States,” according to Pincus. The Rongelapians were evacuated to another island a safe distance away during the early tests.

The 1954 test, on the other hand, was unique. There were no evacuations, and “Castle Bravo,” as it was known, was the largest of the thermonuclear bombs detonated during the military’s 67 tests, “a thousand times the size of the bomb that destroyed Hiroshima,” according to Pincus. The fallout reached the coasts of Rongelap in just hours, blanketing the island in radioactive debris and coating houses and coconut palm trees.

The US concerns about the politicisation of the Issue by China:

Earlier this month, ten Democratic and Republican members of the House of Representatives wrote to Jake Sullivan, President Joe Biden’s national security adviser, about the Marshall Islands, Micronesia, and Palau compact talks. “It is distressing that these negotiations do not appear to be a priority — there have been no formal meetings since this Administration began — even as our international focus continues shifting to the Indo-Pacific,” they wrote.

The congressmen said that the delays were weakening the US, and that “China is all too eager to step in and offer the vitally needed infrastructure and climate resiliency investment that these long-time partners seek.” According to China’s Foreign Ministry, the United States must accept responsibility for the environmental damage caused by its nuclear testing. Under the pretext of “One China Policy,” Beijing wants to entice remaining allies of Taiwan. In line with this, China said it was willing to engage with the Marshall Islands and other Pacific Island nations based on mutual respect and cooperation if they comply with the above-mentioned policy.

It is not hidden by anyone that in the Pacific, China has been systematically poaching Taiwanese allies, notable names being Kiribati and the Solomon Islands and if the Biden administration fails to address these historical traumas of the Islanders, then this could turn out to be the latest casualty for the dwindling US geopolitical assets.