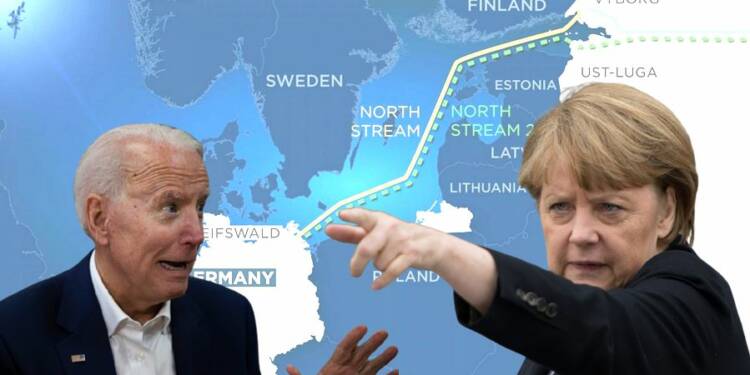 The European Union has had enough of the Biden administration using it as a tool to further its geopolitical adventurism with Russia. Even when the continent is faced with an energy crisis, the possibility of Joe Biden’s administration halting the Nord Stream 2 with sanctions, has forced Germany to threaten him of immense consequences if his government goes ahead with the sanctions. According to documents obtained by Axios, the German government has pushed members of Congress not to penalise the Nord Stream 2 project, stating that doing so will “weaken” USA’s credibility and “ultimately harm transatlantic solidarity”.

Berlin is “fully determined to successfully implement” the bilateral agreements signed on July 21 “to strengthen both Ukraine’s and European energy security and deter Russia from misusing the pipeline for aggressive political ends”, according to the text. “US sanctions targeting Nord Stream 2 would undermine the Joint Statement’s commitment to Germany, erode the US government’s credibility, and undermine the Joint Statement’s achievements, especially the clauses supporting Ukraine,” the German side reportedly said. “In the end, they would threaten transatlantic unity.”

The pipeline, which bypasses Ukraine, is opposed by the United States and some European countries. They argue that it would leave Europe overly reliant on Russian gas, but other European governments argue that the link is essential for ensuring energy security. Germany has promised to intervene, if Russia uses electricity as a weapon in its conflict with Ukraine. But, the agreement does not specify how this will be judged.

These assurances by Germany came for the sake of negating any propaganda that the Biden administration could have used to legitimise sanctions against the Nord Stream 2 project if and when they were brought to the light of the day.

The Biden administration has been pushing theories and reports that Russia is once again amassing troops along Ukraine’s eastern border and preparing for an imminent offensive. Russia, like any self-respecting country, has said that what it does with its own troops and weapons is nobody’s business. It has gone on to say that the claims made by the United States are cheap and of low quality. The EU members have realised that these are cheap tricks by the Biden administration to dissuade the EU from solving disputes with Russia, and to stall the completion of the Nord Stream 2 project.

Biden administration will not like the EU to come out of USA’s dependence in any way. However, if the report is to be believed, the Germans have sent a clear message to Joe Biden, and that is, if he tries to jeopardize the EU’s attempt to gain energy security by imposing sanctions on firms working on Nord Stream 2 project, Washington will be faced with a not so friendly Germany.

Axios quoted a November 19 paper outlining Germany’s plans, which included “strong public statements” condemning Russia’s behaviour and a review of the suspension of political gatherings. The memo stated that Germany was “actively participating in the effort to explore options for extra restrictive measures” at the EU level, according to Axios.

The letter also stated that Nord Stream 2 posed “no threat to Ukraine as long as fair gas transportation is secured,” and that potential penalties on the project would be “a success for Putin“, since it would divide western partners. Germany’s foreign ministry reiterated that it continued to coordinate closely with the US administration, on implementing a joint declaration on the $11 billion pipelines.