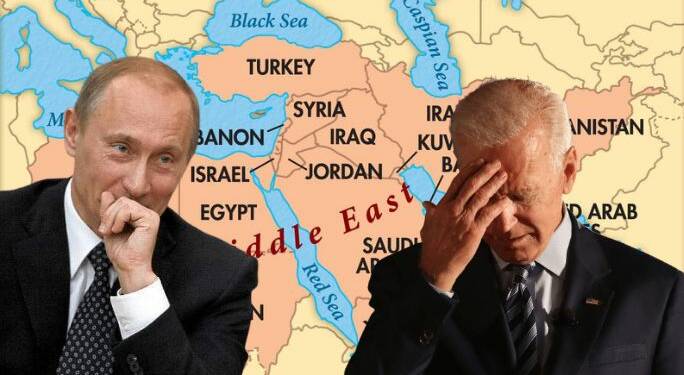 The USA’s interventions in the Middle East correspond to the Sidam touch; everything the US touched became ruined and tattered.

Libya and Iraq are two great examples among many. In its quest to transform these societies into one universal ideological template, the US destroyed great leaders that the US could use to serve its interests.

American leaders failed to understand that democracy is not the solution to every problem, and working and co-operating with foul regimes was indispensable.

On the flip side, the Russian approach has always been pragmatic, although non-democratic. President Vladimir Putin’s policies may have been revisionist in the Central Asian region, but he has always remained on the right side of history in the greater Middle Eastern region.

The 2003 USA’s invasion of Iraq, for instance, was vehemently opposed by Putin. Putin knew Saddam Hussein was crucial to keep Islamist extremists from taking over the country.

Putin once remarked, “Saddam Hussein’s regime was not a liberal one … but it struggled against the fundamentalists. … Now, there is no more Saddam, and we witness on Iraq’s territory the infiltration of a great number of members of different terrorist organizations.”

History shows Putin was impeccable in his assessment. Today’s Iraq is tightly gripped by Iran-backed terrorists, as it struggles to embrace the Arab powers.

Similarly, the USA’s military intervention in Libya in 2011 ended up as a major historical disaster as well. The West overthrew Muammar al-Qaddafi’s state, only to witness it descending into a civil war that continues to date. Once again, Putin was the one who strongly opposed this invasion, and rightly so, as the ensuing disaster suggests.

Putin told the Financial Times in 2019 that “[Do] our Western partners want a region such as Libya to have the same democratic standards as Europe and the U.S.? The [Middle Eastern and North African] region has only monarchies or countries with a system similar to the one that existed in Libya. … It is impossible to impose current and viable French or Swiss democratic standards on North African residents who have never lived in conditions of French or Swiss democratic institutions. … All this led to conflict and intertribal discord. In fact, a war continues in Libya.” Again, Putin was not betraying the truth while saying that.

Russia on the right side of history in Syria as well

The USA’s intervention in Syria is another example of American folly. The Central Intelligence Agency (CIA) launched Timber Sycamore to oust Syrian President Bashar al-Assad but was successfully decimated by Russian intervention.

Russia stopped the US from committing another historical disaster that could have very well ploughed Syrian soil to churn out Islamist movements. Russia prevented Syria from becoming another Libya or Iraq, as it awaits its re-entry into the Arab league and prepares for a better future.

Interestingly, the US could have placed its bet on the Russian approach to the Iranian problem as well. Russia always wanted to have some sort of arrangement between the US and Iran over Tehran’s contentious nuclear program, which could have easily kept Iranians from cherishing ambitions of developing nuclear bombs.

The JCPOA of 2015 was a disaster, but the US managed Iran to sign that deal only after the Russians pressed Tehran. If the US had considered accepting Moscow’s counsel much earlier, it would have been better off today.

Russia- The power of good

This explains why Russia is emerging as the great influential player in the Middle Eastern region on every front; from Libya to Syria and from the Arab world to Iran and Turkey. Russian presence is everywhere, while the US foreign policy has considerably harmed America’s cachet in this part of the world.

What Does ANLA Stand For? Abbreviations with Explanation

What Does ANID Stand For? Abbreviations with Explanation