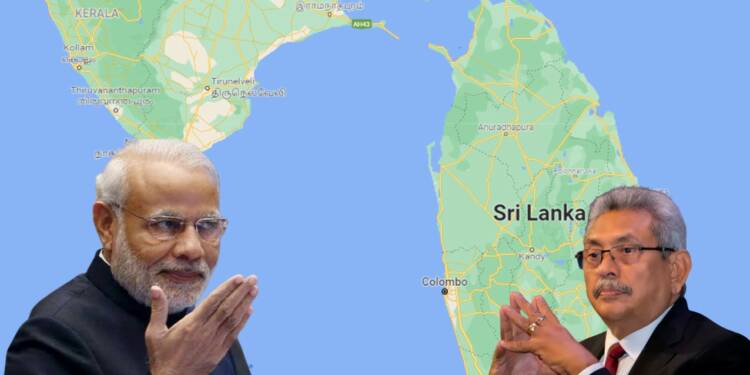 Sri Lanka, a tiny nation in South Asia, has been sailing in two boats for quite a long time now. Sandwiched between Indian diplomacy and Chinese aggression, Sri Lanka has strived not to irk any of the two Asian giants in its quest to keep its economy up and running.

But China’s excessive influence on the Sri Lankan economy and its predatory cheque-book diplomacy has now come to haunt the South Asian country’s integrity and sovereignty. Sri Lanka has already coughed up one of its crucial ports to China, and now China is close to buying out the nation’s entire economy. Interestingly, India is not coming to Sri Lanka’s rescue this time.

The economic crisis has deepened in Sri Lanka of late. The country owes more than $6 billion to China and is expecting India to lend it a helping hand. Lankan Finance Minister Basil Rajapaksa recently visited New Delhi where he was hoping to hold important discussions with Indian Prime Minister Narendra Modi on December 1.

Sources in Colombo said that he was likely to seek crucial economic assistance from India by way of investments and enhanced tourist exchanges. However, the meeting could not take place owing to scheduling issues.

Indian security establishment’s concerns over Sri Lanka’s leap of faith towards China are fully understandable and must be addressed by Colombo before relations between the two brother nations nosedive to a new low.

For instance, Sri Lanka tapped a Chinese firm for a port project in Colombo after scrapping a deal for the port with India and Japan earlier this year. Sri Lanka had signed a memorandum of understanding with Japan and India in May 2019, under previous President Maithripala Sirisena, to jointly develop the Colombo terminal.

After assuming office in 2019, the Rajapaksa administration had vowed to uphold the project but later pushed India and Japan out. And now, the government has embraced China, despite losing Hambantota port to China’s predatory policies.

Sri Lanka is not unaware of China’s intentions to usurp Sri Lankan strategic assets, and last year the Lankan government itself acknowledged that leasing out Hambantota port for 99 years to China was a big mistake.

All the same, the nation approached China last year to seek economic assistance worth $1 billion. The tiny nation also obtained a currency swap facility from China for $1.5 billion. It looks like Sri Lanka is not willing to learn lessons from the tumultuous past, leaving India with few options to help the crisis-ridden country.

Being the net security provider in the Indian Ocean region, India has always provided steadfast economic and military support to the island nation. India has, so far, provided Sri Lanka with 12.64 million covid vaccines, making India a front-runner in staving off Sri Lanka’s health crisis.

Even as Sri Lanka faces an economic disaster in the eye, India has come up with a four-pronged strategy to ease Sri Lanka’s miseries. India is helping Sri Lanka with currency swap and Line of credit facilities, along with providing food and health packages. India is also facilitating Indian investments in different sectors in Sri Lanka to contribute to the growth and expand employment.

Although, thanks to India’s aggressive diplomacy, Sri Lanka has tried to address Indian concerns over the past few months. The Adani group in October had signed a $700-million agreement with the Sri Lanka Ports Authority (SLPA) and conglomerate John Keells Holdings, to develop and manage the Colombo West International Container Terminal. But a lot remains yet to be done to improve India-Sri Lanka ties.

And this is echoed by Sri Lanka’s security experts as well. Sarath Fonseka, Sri Lanka’s former Army Commander and Presidential candidate, has warned in an article that Sri Lanka, which has fallen into China’s debt trap, would end up like Uganda, which almost gave away their only international airport to China.

“Hambantota Harbour is being looked at as a Chinese Naval base by India, the US and other Quad countries. This is a serious threat to Sri Lanka’s security. We would be able to see the result of these idiotic decisions during the definite power struggle in the region within next 60 to 80 months,” the former military leader said.

Fonseka is impeccable in his assessment. With intensifying cold war-like tensions between China and democratic powers, countries like Sri Lanka may find themselves in the crosshairs. If Sri Lanka wants to partner with the democratic world against Chinese hegemonic behaviour, needless to mention China’s recent ban on Sri Lankan bank amid fertilizer row, it must stand up to China.

Sri Lanka has much to gain by siding with democratic powers, and much to lose by sticking to its China-first foreign policy. This also serves as a lesson for other countries in the Indian Ocean region that shy away from taking on China. They must face the wrath of the democratic world if they continue to pose a threat to the Quad’s war against Chinese tyranny.