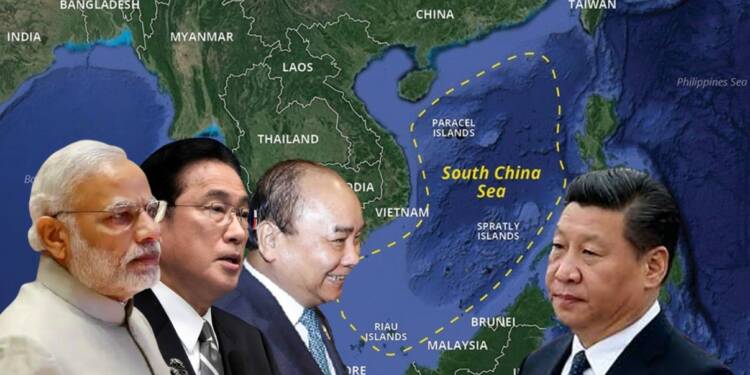 Mired in confusion and plagued with the unwillingness to resist China, ASEAN is definitely not worthy of the attention from the democratic world. However, ASEAN’s prostration before China makes the Southeast Asian region more vulnerable to Chinese hostilities.

So, the region naturally becomes an “area of particular concern” for pro-democratic forces. Hence, to stave off this burgeoning dilemma, India and Japan have now joined hands to amplify Vietnam’s position as the bulwark against aggressive China.

As per a recent report published by Economic Times; Japan, India and Vietnam can launch a trilateral arrangement in the Indo-Pacific to maintain stability and peace. Given Vietnam’s enthusiasm to resist Chinese hegemonic behaviour, this new trilateral can very well be termed as a reward from the major anti-China powers of the region to a country that is willing to safeguard its own interests.

India’s strategic partnership with Vietnam is an important pillar in India’s Act East policy. Both countries are celebrating 50 years of the creation of diplomatic ties in 2021. The Chairman of the National Assembly of Vietnam is already planning to visit India this month.

So, at a time when the region is facing unprecedented levels of threats from China against Taiwan and Japan, countries like India and Japan must shoulder the responsibility to uphold the mantra of the “Free and Open Indo-Pacific” region.

Japan also values its bilateral partnership with Vietnam to keep China from eying resources in the South China Sea region. Japan in September signed an agreement with Vietnam to export defence equipment, including ships, to China’s neighbour.

In a region that still works by the sentiment of not antagonising China, Vietnam is a country that is always willing to take on China. All other countries in Southeast Asia, like Indonesia, the Philippines, Thailand, Malaysia, Cambodia, Laos, and others, are too confused.

They do not know whether they should be going out of their way to challenge growing Chinese belligerence in the region. Indonesia, for instance, does not seem to have a very coherent China policy, and anything resembling a policy that might be in place right now seems to be favouring the communist nation. Rodrigo Duterte of the Philippines is simply too inclined to have good ties with China to take any substantial action against it. So that’s that.

The only country with a consistent anti-China outlook has been Vietnam. As such, Vietnam is going to soon become the one nation that global powers bank on, to push against Chinese aggression. The true power of Vietnam still remains untapped. So, India and Japan can very well help Vietnam steer the troubled waters with safety and confidence.

Read More: The power of Vietnam

Japan and India are not new to trilateral arrangements:

Japan and India share memberships of several new trilateral arrangements that emerged over the past two years. India-Japan-Australia trilateral supply chain resilience initiative (SCRI) is above all, devised to shift supply chains out of China and make them more stable and secure. Similarly, India-Japan-USA have their separate arrangements in the Indo-Pacific region. Also, no one should undermine the emerging trilateral arrangement between India, Japan, and Russia.

If Vietnam’s defence and economic capabilities are strengthened aggressively, it won’t just help tame the Chinese aggression but also encourage other countries to join hands with democratic powers. Vietnam’s rise is imminent, and it will ensure the Southeast region doesn’t fall prey to the ASEAN’s policy paralysis vis-à-vis China.