ASEAN: Not worthy of Quad’s partnership 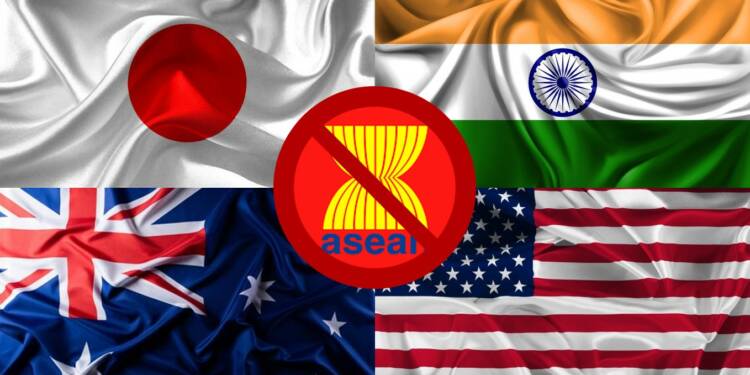 One of these days the policymakers and the foreign policy analysts will need to think about the need for keeping ASEAN at the pedestal when it is not willing to take up the role. While time and again leaders of Quad in different settings called for the importance of ASEAN centrality in the Indo-Pacific and increased their respective country’s engagement with the South East Asian nations, ASEAN has used it as security leverage to increase its business with China. It seems even the pandemic and the way China behaved was not able to reveal the obvious to the member nations.

According to reports, President Xi Jinping’s long-held plan to raise ties with the Association of Southeast Asian Nations (ASEAN) to a higher level of diplomatic recognition could be realised during next month’s special summit between the bloc’s leaders. During the bloc’s meeting with Chinese Premier Li Keqiang on Tuesday, the prime ministers of Malaysia and Singapore expressed their willingness to attend the November summit. This coming at a time when China is chipping away the sovereignty of the ASEAN member nations and its economic policies are hurting the markets even in Singapore, gives a perfect reason why ASEAN is not worthy of Quad partnership and needs a businessman like approach that Donald Trump was able to provide.

On Thursday, the Association of Southeast Asian Nations (ASEAN) announced that it has reached an agreement with China to upgrade their relationship to a comprehensive strategic partnership, a day after a similar agreement was reached with Australia. Which is a clear effort to balance the two sides and remain on China’s good side.

ASEAN not worthy of Quad’s partnership

In recent decades, ASEAN has made tremendous progress in maintaining regional peace, slowly establishing a globally connected economic community, and securing its place at the heart of Indo-Pacific economic and security cooperation architecture. However, the year 2021 will be remembered for a perfect storm of internal and external obstacles.

After keeping COVID-19 at bay for most of 2020, the delta variant’s quick spread has resulted in thousands of deaths and thrown millions more into poverty, hampering the region’s uneven economic recovery. Efforts to resolve the Myanmar situation have failed, and in all this, ASEAN is handling its foreign policy that could make the situation worse. China has been investing heavily in many ASEAN countries and the lure of these investments has re-emerged during these hard times.

ASEAN recognises that AUKUS is part of a bigger picture, with the Quad — an informal alliance of the US, Japan, India, and Australia — increasingly positioned as a deterrent to Chinese military aggression. Quad countries aim to counterbalance China and create a multipolar regional system that is democratically safe.

ASEAN is concerned about three things: becoming embroiled in a future conflict, being compelled to “choose a side,” and losing relevance in the face of the world’s most important crisis. Still, ASEAN was not designed to deal with major power competition and expecting it to do so is unrealistic.

This is what Quad realised and with the promulgation of ASEAN centrality, it wanted to address it and make the countries feel comfortable for a partnership. However, as the organisation continues to use these genuine efforts of Quad to reap maximum benefits from China, it should not be considered a worthy partner of Quad.