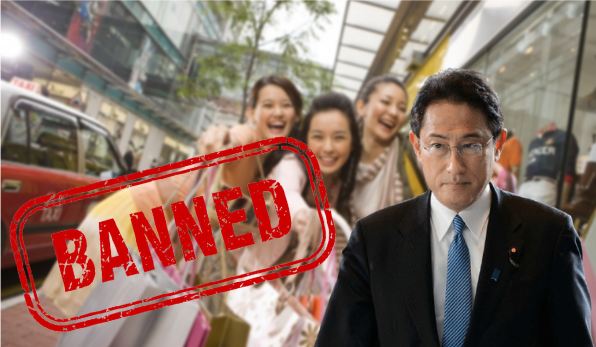 Japan is eager to cut all its economic ties with China and decouple itself completely from the Communist nation. In line with this policy, Japan has banned Chinese binge buyers. The Japanese government has decided to abolish the present system that allows foreign students and long-term residents to make duty-free purchases. This is Tokyo’s response to suspected cases of reselling and obstacles in eligibility checks.

Under the new system, the Japanese government and the Liberal Democratic Party (LDP)-led ruling coalition plan to restrict duty-free purchases to tourists and foreigners coming to Japan on a short-term visa of 90 days or less, instead of “non-residents” under the country’s foreign exchange and foreign trade law. The revision in Japanese policies is thus going to end the pattern of Chinese binge shopping in Japan.

For the past few years, Chinese binge buying has been a popular trend in Japan. In 2015, for example, bakugai (explosive buying) became a buzzword in Japan. It referred to the trend of frantic shopping by overseas Chinese tourists visiting Japan. China’s shop-till-you-drop tourists went crazy for tax-free Japanese products including popular consumer electronics.

Similar eating habits, tastes, preferences and appreciation for Japanese goods in Chinese customers have further propelled the culture of Chinese binge-buying in Japan.

Chinese customers trust Japanese products more than the products of their own country. Therefore, Chinese travellers shop heavily in sophisticated segments like cosmetics. Etsu Ho, a researcher in JETRO’s China and North Asia Division, for example, said, “Many Chinese consumers trust Japanese cosmetics, which they feel are compatible with their skin types.”

As long as tourists visit Japan for a few days and shop heavily, Tokyo doesn’t have a problem. However, the Japanese government seems to be concerned about the students and other travellers who stay for a longer duration in Japan.

Under the present system, Japan allows students who have no-part time jobs to shop at tax-free outlets for the first six months of their stay. However, labour-intensive duty checks to confirm if a student is not working part-time has become a major headache. Japan’s National Tax Agency has also unearthed some cases of suspicious “binge buying” by foreign students after introducing a digital system of purchaser information in April last year.

It is quite possible that Chinese buyers purchase duty-free goods in huge quantities and then resell them at higher prices to make big profits. It makes sense for long-term Chinese residents in Japan to use tax-free outlets as a wholesale market, given that Chinese products themselves don’t match the quality and durability of Japanese goods.

As such, it is Japan that loses out on tax revenues due to the suspicious behaviour of Chinese customers. Moreover, China itself makes some sort of a business activity out of Japanese products and this is why Tokyo seems eager to plug the loophole in its foreign trade law. Japan will no longer allow China to exploit its tax-free outlets and make illegitimate gains out of the Japanese economy.