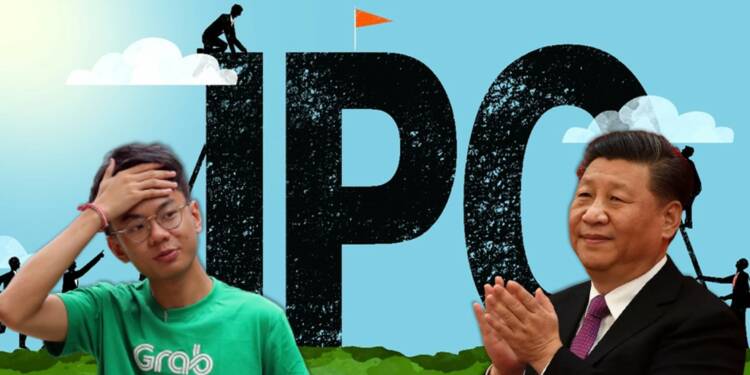 One Bad Fish Can Spoil the Whole Pond is a saying which can be superimposed on many situations, but this perfectly fits the stanchion of Asian businesses and start-ups who are interested in attracting investments from IPOs in the New York Stock Exchange. The western investors and the US stock exchange are now too cautious of any startup’s IPO coming from Asia, given how the CCP has used its state machinery to recall IPO’s of domestic firms which were registered in the US. Because of this, the recent IPOs registered by South-East Asian companies are also facing the heat of investor pessimism.

The much-anticipated U.S. debut of Singaporean super app Grab turned out to be a sour one on Thursday, with shares ending the first trading day down roughly 21%. While the long-term pricing performance of Grab is unknown, one analyst believes the first drop should serve as a signal to other Southeast Asian businesses considering going public to aim for “more realistic values.” Although this may seem like a plausible reason, the most overlooked aspect is the way in which the Chinese Communist Party’s actions in this realm is creating hurdles for other Asian companies negatively.

The connection of Singapore’s markets which are being swarmed by Chinese IPOs and how it is hurting the startup prospects.

In 2020, Singapore’s portfolio investment assets in China amounted to 262.76 billion Singapore dollars. Since 2013, China has been Singapore’s largest trading partner, and Singapore has been China’s largest foreign investor. In 2018, the China-Singapore Free Trade Agreement (CSFTA) was upgraded, and according to Singapore, CSFTA now comprises a meaningful and substantive package in terms of market access for Singapore’s export of goods and services into China and provides greater transparency and predictability for business activities between the companies from Singapore and China.

Read more: Singapore must untangle itself from China before it is too late

The negative impact of Chinese investments:

The domino effect of the falling of Chinese companies is in full swing, as one after another, four Chinese real estate companies have toppled. As reported by Asia Nikkei, Modern Land China has become the latest developer from Asia’s largest economy to miss a dollar bond payment, underscoring the stress spreading across the sector, as the property balloon burst at the time when Beijing was at its most vulnerable. According to a filing recently with the Singapore stock exchange where the bond is traded, the corporation failed to pay interest and principal on a $250 million bond. This month, Fantasia Holdings, Sinic Holdings, and China Properties have all defaulted on offshore notes, while China Evergrande Group narrowly avoided defaulting at the last minute by making a coupon payment on time.

As liquidity concerns intensify amid mounting maturities, as per reports, global rating agencies have already lowered the scores of a record 44 Chinese developers this month. Earlier, Modern Land dropped a plan to extend the bond’s repayment period, and trading in its stock and debt securities was delayed until the company made another announcement. The trade embargo is still in effect, according to the newest declaration. The fact that the Singapore stock exchange will also face the pressure of this fall, means that other countries are now going to suffer from the bad policies of Xi Jinping.

The same things have started impacting the start-ups in the country who are wanting to seek investments by registering IPO in NYSE. Grab’s stock surged at the start of the U.S. market, but then plummeted after it merged with Altimeter Growth, an already-listed special purpose acquisition company (SPAC). At Thursday’s close, Grab’s market value was around $34.6 billion, falling short of Altimeter’s forecast of $40 billion in the SPAC purchase. Grab’s super app in Southeast Asia provides a wide range of services, including ride-hailing, delivery, and financing. The corporation has emphasised the region’s potential for growth, yet it has continued to incur significant losses.

“IPOs are as much about chance and timing as they are about anything else. Unfortunately, with global monetary policies tightening, the best [moment] for U.S. markets to mindlessly ascribe stratospheric valuations to new tech listings is likely over” OANDA’s senior market analyst, Jeffrey Halley, stated. “Unfortunately, Grab has arrived on the market at a time when sentiment is both cautious and weak.” The analyst may have circumvented the exact explanation, but the reality is that the Chinese malpractices in the USA have made the investment atmosphere so bad that the startups from countries like Singapore are facing the brunt of the repercussions.