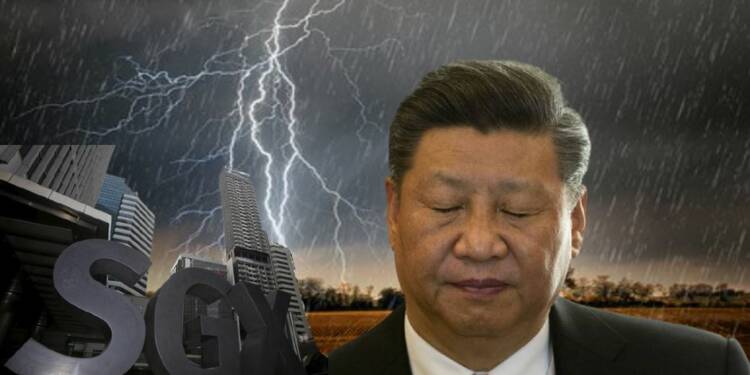 The domino effect of the falling of Chinese companies is in full swing, as one after another, four Chinese real estate companies have toppled. As reported by Asia Nikkei, Modern Land China has become the latest developer from Asia’s largest economy to miss a dollar bond payment, underscoring the stress spreading across the sector, as the property balloon burst at the time when Beijing was at its most vulnerable. According to a filing on Tuesday with the Singapore stock exchange where the bond is traded, the corporation failed to pay interest and principal on a $250 million bond. This month, Fantasia Holdings, Sinic Holdings, and China Properties have all defaulted on offshore notes, while China Evergrande Group narrowly avoided defaulting last week by making a coupon payment on time.

As liquidity concerns intensify amid mounting maturities, as per reports, global rating agencies have already lowered the scores of a record 44 Chinese developers this month. Earlier, Modern Land dropped a plan to extend the bond’s repayment period, and trading in its stock and debt securities was delayed until the company made another announcement. The trade embargo is still in effect, according to the newest declaration. The fact that the Singapore stock exchange will also face the pressure of this fall, means that other countries are now going to suffer for the bad policies of Xi Jinping.

Evergrande disaster and the downfall of Chinese economy:

Evergrande was in talks to sell a 50.1 percent stake in its Evergrande Property Services unit to smaller rival – Hopson Development Holdings. Evergrande was once China’s top-selling developer and is now suffering under more than $300 billion in debt. The group has been struggling to acquire funds to pay its various lenders and suppliers, amid fears that it would technically default on one of its international bonds.

Evergrande stated in its earlier filing that it would continue to implement measures “to alleviate the liquidity concerns”, and that it would use its best efforts to engage with its creditors for the renewal or extension of its borrowings.

China lovers are in for a shock, and foreign investors who had parked their money in the China Evergrande Group are in for an even bigger shock. The real estate giant, which is at the brink of making a default on debt repayments, has made a shocking announcement – it will prioritise interest payments on domestically issued bonds. This has raised suspicions amongst foreign investors that they will be the last ones to get repaid.

Read more: ‘Don’t invest in China,’ Evergrande sends a beautiful message to investors all over the world

Hengda, Evergrande’s primary unit in mainland China, has announced that it will pay coupons worth $19 million on its October 2025 bond, that becomes due on Tuesday. The announcement came as a shock for foreign investors, as the real estate giant has failed to meet three rounds of bond interest payments in the offshore market worth $277 million, since late last month.

Xi Jinping is worsening the wounds while trying to mend it:

Authorities’ regulatory assault on Chinese developers has locked down finance options for developers, who are seeking to rein in excessive debt, before it triggers a financial disaster. Companies can only increase borrowings, provided their balance sheets match the so-called “three redlines” regulations, which include net gearing, liquidity, and other criteria. Banks have reduced their exposure to the industry as a result of the crackdown, and corporations haven’t used the offshore bond market in over a year.

Despite these steps, Evergrande’s missing payments and smaller rivals’ defaults have generated fears of contagion across China’s $50 trillion financial system. According to S&P Global Ratings, developers are expected to redeem 480 billion yuan in domestic and offshore bonds over the next year, accounting for over a quarter of their free cash reserves. According to brokerage CGS-CIMB, the first significant round of maturities is expected in January, with around $6.2 billion in offshore debts due for repayment.

Now with the fall of the fourth real estate giant, and Evergrande also being a lost cause, China’s financial institutions are facing a fierce heat. However, the spillover effect is also in place, with foreign stock exchanges, like the one in Singapore facing the heat of Chinese companies, going bust because of the domestic policies of Xi Jinping.