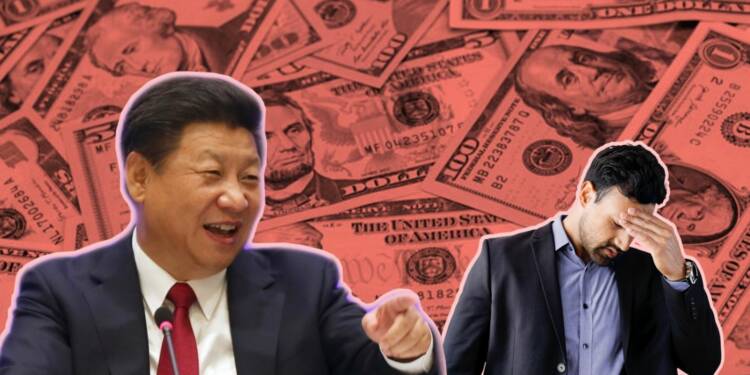 This is a warning– if you have invested in China, pull back all your money. With the Chinese Communist Party (CCP) anything could happen. Beijing could start imposing curbs and killing the enterprise you have invested in or a hardline Communist leader could simply hark China back to the Maoist era or worse still, a defaulting firm could prioritize domestic investors and throw you under the bus.

Foreign investors in the China Evergrande Group have actually been thrown under the bus. The Chinese real estate giant has been on the brink of defaulting for quite some time now. It was unclear how the Evergande debt default would pan out. But now things are becoming clear- Foreign investors can say bye bye to their millions because Evergrande is no mood to pay them back.

China lovers are in for a shock and foreign investors who had parked their money in the China Evergrande Group are in for an even bigger shock. The real estate giant, which is at the brink of making a default on debt repayments, has made a shocking announcement- it will prioritise interest payments on domestically issued bonds. This has raised suspicions amongst foreign investors that they will be the last ones to get repaid.

How China is throwing foreign investors under the bus

Hengda, Evergrande’s primary unit in mainland China, has announced that it will pay coupons worth $19 million on its October 2025 bond that becomes due on Tuesday. The announcement came as a shock for foreign investors as the real estate giant has failed to meet three rounds of bond interest payments in the offshore market worth $277 million since late last month.

Nikkei Asia has quoted a portfolio manager as saying, “Earlier this year, fearing a situation similar to what we are seeing now, we began selling out our dollar bond exposure to Evergrande.” The portfolio manager added, “Our assumption has been vindicated. Offshore creditors have the least protection in the event of liquidation of Evergrande, and we assume bondholders will recover about 10% of their total dues.”

China Evergande Group has a total $20 billion in outstanding offshore bonds. So, we are talking about sizeable foreign investment becoming a victim of China’s unfair and unequal economic practices. Alicia Garcia Herrero, chief economist for the Asia-Pacific at Natixis said, “All in all, Evergrande has many stakeholders and creditors, but not all are equal.” Herrero added, “Offshore bondholders seem to be the last in the queue.”

The problem with investments in China are hardly limited to the China Evergrande Group alone. The entire Chinese real estate sector is in trouble. The real estate bubble in China is simply too fragile and almost about to pop. China Evergande Group’s downfall is being described as China’s ‘Lehman’ moment and real estate groups like Fantasia Holdings have already shown signs of falling in a debt crisis.

Going ahead, a number of Chinese real estate giants that had relied on heavy borrowing through both onshore and offshore debt instruments to finance construction of useless infrastructure could face a difficult situation. And on top of all this, the China Evergrande Group’s prioritization of onshore bond interest payments have created a strange precedent.

From now on, all defaulting real estate giants might start prioritising onshore bond interest payments to avoid local flak and leave the foreign investors to fend for themselves.

China Evergrande Group’s decision is a big lesson for foreign investors- if you invest in China, do so at your own risk because there is no security of return and Beijing will start looting you at will.

Yet, there are many investors and portfolio managers still parking their money in China. Ray Dalio, founder of the $140bn US hedge fund Bridgewater Associates and a prominent American investor said that he spoke to Chinese Communist Party officials and was encouraged by what he heard.

Dalio said, “At this stage I’m assured that this doesn’t mean foreigners and foreign investors are not welcome.” The 72-year old added, “We are in an environment that is unsettling to investors”. But “China’s motivations should not be interpreted as a return to Maoism”.

Howard Marks, co-founder of distressed asset manager Oaktree Capital Management, too said, “Compared with the US, Europe and Japan, I think of China as an economic adolescent . . . tempestuous and volatile but its best decades are ahead.”

Clearly, there are investors and fund managers who still argue that the ongoing disruption in Chinese markets is merely temporary. Yet, you can’t compare Chinese markets with those in Europe or the US. The problem with China is that it is more political than economic. The CCP is basically dishonest and therefore it doesn’t try to uphold the interests of foreign investors. There is only way that foreign investors can save themselves from China- by not investing in China.