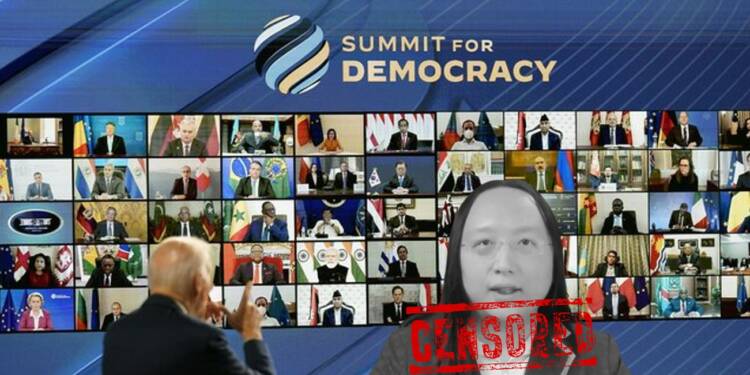 Censorships are not new to Taiwan. China has censored this democratic island nation; on so many occasions; and at so many levels. But this Friday’s censorship, and a humiliating one at that, did not come from China but the self-proclaimed torch-bearer of democracy—The US.

Joe Biden’s democracy summit was meant to empower democracies across the world. So, when the name of Taiwan emerged on the list of invitees, it came as a big boost to Taiwan’s independence movement against China.

By inviting Taiwan, the US portrayed its commitment to defend democracies against communist tyranny. The US made the ostentatious move to showcase its boldness; its will to challenge the one-China policy; and its intention to call China’s bluff on Taiwan.

But when push came to shove on Friday, Taiwan was left in the lurch. Taiwanese minister got censored, humiliated and reproved. He got punished for speaking Truth and for calling out China’s barbarism. He got snubbed for labelling Taiwan as an open country. In a summit for democracies, an authoritarian China registered a flawless victory, at the behest of none other than Joe Biden himself.

Timeline of events while Taiwanese minister spoke at the democracy summit:

Taiwan’s digital minister Audrey Tang appeared via video link to address the US-hosted summit on Friday. Tang presented a map showing countries ranked by civil rights as part of a “digital authoritarianism” discussion. No prizes for guessing, Taiwan and China were labelled with different colours. To be specific, Taiwan was coloured green and China was coloured red.

After Tang concluded her remarks, the moderator went to some other panellist. 20 minutes later, Tang was again asked to participate in the discussion, but startlingly, her video feed was cut off. She was only audible. Needless to mention, the map differentiating Taiwan from China was no longer visible. If that’s not humiliation, then only God knows what is.

Why did this happen?

Apparently, the officials got unnerved; not just the uninvited Chinese but the host American officials too. The State Department blamed a technical error but a Reuters report revealed that the directions came straight from the White House.

A source from the White House was quoted as saying by Reuters that “the White House was concerned that differentiating Taiwan and China on a map in a U.S.-hosted conference – to which Taiwan had been invited in a show of support at a time when it is under intense pressure from Beijing – could be seen as being at odds with Washington’s one-China policy, which avoids taking a position as to whether Taiwan is part of China.”

The State Department gave a weird excuse for this mind-boggling humiliation of Taiwan. The official spokesperson said “confusion” over screen-sharing resulted in Tang’s video feed being dropped, calling it “an honest mistake.”

So, the US didn’t want to cross China’s red line on Taiwan. As the White House sources say, Washington didn’t want to irk the Chinese. Beijing was already furious at not being invited to the summit, and Taiwan’s bold move to challenge China’s claims over Taiwan in a US-hosted summit could have aggravated the diplomatic standoff between the two powers.

Was Taiwan’s humiliation the only message the US wanted to send out?

But if that’s the case, what was the point of inviting Taiwan to the summit in the first place? Was this summit orchestrated to humiliate Taiwan and strengthen China’s claims over the island nation? Joe Biden utterly ruined the strong message that would have been sent to China and other autocracies.

China openly poked the US in the eye by forcing Pakistan to openly boycott the summit. Taiwan’s humiliation was perhaps a response to that.

But this episode leads us to an important question. Can the US be trusted to defend Taiwan against a Chinese invasion? The Joe Biden administration is totally spineless that can’t even tolerate a map differentiating Taiwan and China. Can it tolerate Taiwan’s moves to defend itself? In its quest to appease China and not overstep its red line, the Joe Biden administration is dangerously blurring the line between strategic ambiguity and a complete surrender before Xi Jinping.