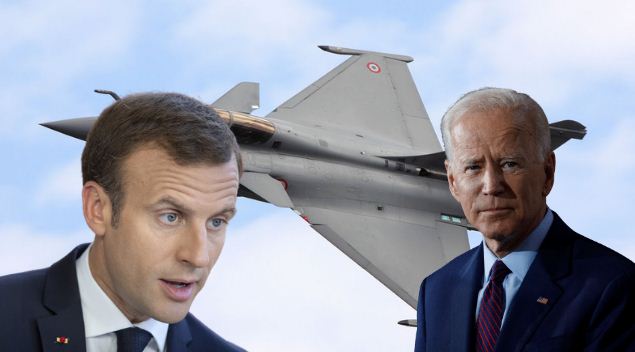 The French government under Emmanuel Macron had for the longest time advocated a united approach to contain the rise of a China which does not want to comply with the rules of international engagements. However, since the AUKUS betrayal, Paris has realised they cannot trust Joe Biden and his administration, given their actions have ended up dividing the coalition of like-minded countries. Since then, France has started aggressively investing in the regions where the US influence is receding as well as building its own alliance of like-minded countries.

This is best encapsulated by the record sales of the highly sophisticated French fighter jet, Rafale. Recently, the deal with the UAE helped Emirates to get out of the limbo that the Biden administration has put it in with the stalled F-35 deal. However, the Rafale jet has many components which originate in the US and, thus, depend on Washington’s approval. This makes things way more complicated, as the US currently possesses a chokehold on French defence exports. France has taken up the role of a great power that is willing to stabilise regions as well as work with allies and foster a healthy international environment.

For France to continue being impactful and to enhance its own weapons industrial complex, it needs to get out of the chokehold of the US approvals.

The US threat to France’s Rafale sales

Back in 2015, Egypt and France worked together to make the first deal to export the Rafale fighter jet. The then-French Defense Minister Laurent Fabius paid a visit to Cairo and sealed a €5.2 billion agreement for the sale of 24 Rafale fighter jets.

A more fascinating aspect of this arrangement was the prospect of purchasing 12 more Rafales in addition to the obligatory 24 twin-seat fighter jets. The contract for 2015 offered this option. The United States is said to have halted the transfer of these further 12 fighters. According to the French newspaper La Tribune, a deal between Cairo and Paris to sell Egypt 12 Rafale jet fighters was halted because the United States refused to export a cruise missile component that was part of the fighter plane. The report was first made public in February of 2018.

According to French insiders, as reported by the article, the sale was delayed due to a shortage of the American component of the SCALP missiles, not a financial issue as had previously been the case due to Egypt’s dire economic circumstances.

Dependence on the USA for Rafale production

In the past, there has been a disagreement between the United States and France over French arms sales to Middle Eastern countries including Egypt and the United Arab Emirates. In 2013, the US refused to deliver to the UAE French components that were needed to create surveillance satellites. The International Traffic in Arms Regulations (ITAR) is a US regulatory framework that prohibits and controls the export of defence and military-related technologies in order to defend US national security and further US foreign policy objectives.

On the 2015 Rafale contract, Eric Trappier, chairman and CEO of Dassault Aviation, was quoted as saying that the French government must seek US consent before selling SCALP missiles to Egypt. Certain US parts are required for the long-range weapon to work.

Earlier this month, the United Arab Emirates placed an order for 80 Rafale fighter jets and 12 military helicopters, strengthening economic and diplomatic ties with France through a 17 billion euro ($19.20 billion) arms purchase. As French President Emmanuel Macron began his two-day tour to the Gulf, where he also visited Qatar and Saudi Arabia, the largest ever foreign sale of the French warplane was signed.

Such deals have already been signed with Egypt, another consequential Middle Eastern power. All these developments have occurred at the expense of the Biden administration. This coupled with the facts elaborated above, one is forced to think that it will not be long when the US tries to sabotage French weapon deals. Going ahead, France should work assiduously to detach itself from the US Weapons Industrial Complex and exports of parts from the US, which could become an impediment to its own defence exports.