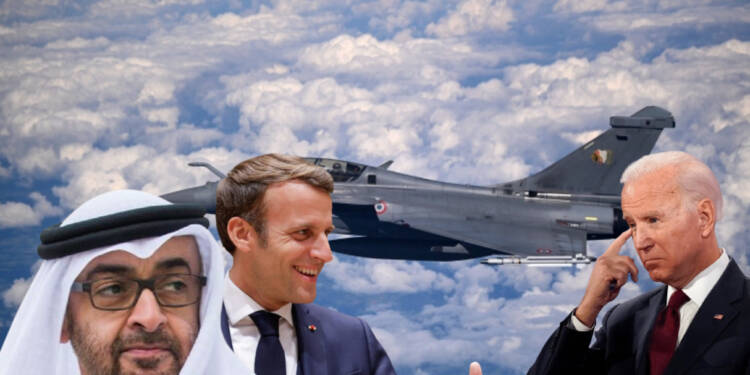 The Biden administration has backstabbed so many allies and friends that one can lose count; be it Afghanistan, flip flops on Taiwan, abandonment of the Middle East & North African allies, or the classic case of Joe Biden’s betrayal of France and the European Union vis a vis AUKUS deal. Now, with a single deal, both France and the UAE have taken their sweet revenge on the Biden administration and its self-destructive policies. However, this has made the allies realise how they were being taken on a ride all along, and now France and UAE have come together to take their own sweet revenge.

On Friday, the United Arab Emirates placed an order for 80 Rafale fighter jets and 12 military helicopters, strengthening economic and diplomatic ties with France through a 17 billion euro ($19.20 billion) arms purchase. As French President Emmanuel Macron began a two-day tour to the Gulf, where he will also visit Qatar and Saudi Arabia, the largest ever foreign sale of the French warplane was signed.

The visit to the Gulf by the French President coupled with the humongous weapons deal has the foreign policy echelons buzzing. The gap that the disastrous foreign policy of Joe Biden had created in the Middle East is being filled by France.

The French connection in the Middle East

The deal, which was signed on the margins of the Dubai Expo 2020 by Abu Dhabi Crown Prince Sheikh Mohammed bin Zayed al-Nahyan (MBZ) and Macron, is worth $19 billion, according to the French presidency. Officials estimate that the first French warplanes will be delivered in 2027, resulting in the creation of 7,000 employment.

Macron’s visit comes at a time when Gulf Arab states have expressed scepticism about the US’s regional strategy, even as they demand additional weapons from their important security ally. “These contracts are important for the economy and create jobs in France. What is good for French men and women, I defend ardently,” Macron told reporters.

France has stood by the United States through thick and thin. It is believed that this is the first time that France has taken such a radical decision, and it best epitomises its fury. France has minced no words in describing its anger against allies like the US, UK, and Australia. The French Foreign Minister called the deal a “unilateral, brutal and unpredictable decision”. While speaking to radio station Franceinfo, Le Drian said that it was a “stab in the back” and added that France had established a relationship of trust with Australia, and it has now been “betrayed”.

The French government had immediately recalled its ambassador to the U.S. in response to the then announced national security partnership between Washington, Canberra, and London. Jean-Yves Le Drian, the French minister for Europe and foreign affairs, said on Friday that the move was made at the request of President Emmanuel Macron himself, and that “this extraordinary decision reflects the exceptional seriousness of the announcements made on September 15 by Australia and the United States.” This did not go well with any of the allies in the European Union and the organisation vehemently criticised Joe Biden for keeping long-standing allies in the dark.

The impact of the deal

The Rafale will replace the Mirage 2000 fleet, but it is unlikely to replace the American-built F-35, according to defence sources, as the UAE continues to hedge its security with two key suppliers, France and the United States. Nonetheless, the agreement might be interpreted as a sign of impatience while the US Congress considers whether or not to approve an F-35 purchase due to worries about the UAE’s relationship with China. While the UAE has time and again taken actions that can be considered in line with the western countries, but the US is using it as a reason to stall the delivery of F-35s.

The USA has been on high horses for a really long time, but now the way in which Joe Biden has left the Middle East, UAE, and the Abraham Accord countries have taken things into their own hands. Now France has also made sure that the US cannot browbeat the regional powers and the sale of Rafael has sent the best message to the Biden administration that every action has an equal and opposite reaction.