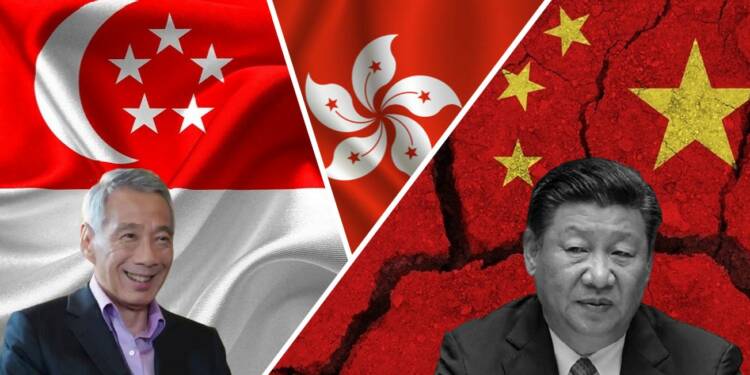 Chinese Communist Party has slowly yet steadily managed to kill the long-standing business prowess of Hong Kong. The city is now just a shadow of what it used to be, and it is all part of Xi Jinping’s plan. For long he has intended to replace Hong Kong with Shenzhen as the business capital of Asia. However, the sacrifice of Hong Kong has paid dividends to an entirely different country, Singapore. That’s right, Singapore has become the most sought-after business location for companies moving out of Hong Kong and not Shenzhen.

Singapore’s recovery strengthened in the final three months of 2021, with the economy experiencing its fastest full-year growth in more than a decade thanks to the removal of virus restrictions and strong manufacturing. Last year, the city-state’s economy grew by 7.2 per cent, the most since 2010.

In contrast, Hong Kong has been following one of the strictest lockdowns for the longest time, an obvious strategy by Xi Jinping to slowly bleed this long-standing financial capital of the world to its end.

The exodus of businesses from Hong Kong

Shenzhen will serve as the core of the Greater Bay Area, an integrated territory that includes Hong Kong and Macau, according to Chinese Communist Party (CCP) leader Xi Jinping. Hong Kong would be ignored under Xi’s strategy as China concentrates exclusively on expanding Shenzhen. As a result, it is critical to figure out whether Shenzhen can supplant Hong Kong as China’s “world city.” The answer is pretty obvious, the strategy failed for the CCP. Only the first part of this two-pronged approach succeeded, and that is the exodus of businesses from Hong Kong. And it was not Shenzhen that received these departures, but it was the Southeast Asian city-state, Singapore.

Hong Kong’s transition in recent years has resulted in a population outflow, with the population falling by 1.2 per cent in 2020, the largest drop since records began in 1960, and the trend is projected to continue years on ahead. Enrolment in schools has decreased, tens of thousands of local inhabitants have migrated to the United Kingdom, and pension fund withdrawals, which are only possible when one permanently leaves the city, have reached an all-time high. In addition to this, the number of U.S.-based firms in the city fell for a third straight year to 1,267; down 6.2% from 2018.

In one survey, the American Chamber of Commerce said more than 40% of its members were considering leaving Hongkong. While the Chinese Communist Party was expecting the businesses leaving from a burning former British colony to integrate more with China by coming to Shenzhen, they have instead been moving to Singapore. As reported by Bloomberg, Felix Chung, a pro-establishment lawmaker who represents the textile industry in the Legislative Council, said Hong Kong “cannot disconnect with the rest of the world” if it is going to be an international financial centre. “Singapore, as a rival to Hong Kong, will definitely take the chance to grab as many of our businesses as possible,” he said. And he was not wrong, looking at the growth trajectory Singapore has taken.

Also read: Singapore must untangle itself from China before it is too late

According to preliminary estimates released Monday by the Ministry of Trade and Industry, GDP increased 2.6 per cent on a seasonally adjusted basis from the previous three months, exceeding a median projection of 2.1 per cent in a Bloomberg survey of economists.

According to analysts at Barclays and Goldman Sachs Group Inc., the strong comeback, combined with rising consumer prices, has reinforced predictions that the Monetary Authority of Singapore will tighten policy further at its April meeting.

If anything, these developments, and the accompanying observations prove that the biggest beneficiary of the CCP’s intentional sacrifice of Hong Kong has been Singapore. Unlike the ambitions of Xi Jinping to replace Hong Kong with Shenzhen as the new world market. Going ahead, as Beijing continues the policy trajectory it has decided on, the dividends for Singapore will only multiply given the further opening up of the economy.