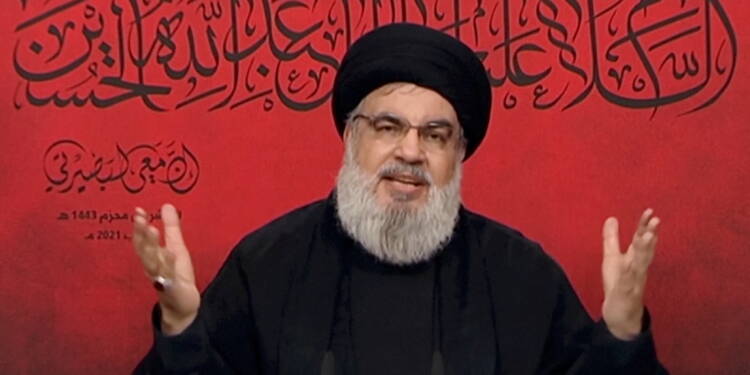 The situation in the Middle East is heading towards further reorganisation as Iran’s proxy assets, ranging from Iraqi militias to Hamas and even the Hezbollah, are all facing a tumultuous period. With the increasing influence of important Arab world countries, in a rare instance, the Lebanese government rebuked Hezbollah and its leader.

As per reports, on Monday, Lebanon’s government slammed Hezbollah after the group’s head made harsh remarks against Saudi Arabia. Prime Minister Najib Mikati called for an end to the fostering of “political and sectarian enmity” after the Lebanese state issued a rare criticism of the Iran-backed group.

Hassan Nasrallah, Hezbollah’s Secretary-General, accused Saudi Arabia and its leaders of sponsoring terrorists and attempting to turn Lebanon into a “Gulf emirate.” Saudi Arabia, he alleged, has also deployed suicide bombers to Syria, Iraq, and Yemen, obviously, without any proof. Nasrallah was speaking on the second anniversary of the assassination of Iranian commander Qassem Soleimani by a US drone strike shortly after his arrival in Baghdad. Mikati spoke out against Hezbollah’s “pattern of positions” that he said affected the Lebanese people “first” and Lebanon’s ties with its “brothers” second.

The unprecedented statement from the Lebanese government against Hezbollah after the country’s top Christian party signalled the possible end of alliance with Hezbollah, the fortunes of the biggest Iranian proxy is headed for an early end.

Hezbollah the most important proxy of Iran’s geopolitical designs

In Iraq, Lebanon, Yemen, and Syria, the Iranian government has developed proxies or armed militias which it has been using to keep these countries destabilised and gain influence in the politics there. In recent years, Hezbollah has gained more influence over the Lebanese government, yet it still has weapons that are not under the jurisdiction of the state. Weapons are also strewn about in Palestinian refugee camps that are not under the control of the state. Lebanon’s relations with Gulf countries have deteriorated since the start of the Syrian war and Hezbollah’s support for the Houthis in Yemen.

The centrality of Hezbollah in the Iranian proxy operations over the entirety of the Middle East sheds the light on how important of a tool it is for Iranian Middle East policy. Brigadier General Turki al-Maliki, the official spokesman of the Arab Coalition for the Support of Legitimacy in Yemen, revealed with irrefutable evidence the deep involvement of the Lebanese Hezbollah in training and enabling Houthi militia affiliates in preparing and launching missiles and drone planes on targets in Yemen and Saudi Arabia during a press conference on December 26th.

The shocking fact revealed at the press conference was how the Lebanese Hezbollah and its Houthi acolytes converted the civil Sanaa International Airport into a military base, a missile and drone plane depot, and a launchpad for such weapons while using the civil aviation flights as a shield against counter-ops.

However, with the Iranian economy in a sorry state, the Arab world uniting, the fortunes of all these proxies were already on a downward spiral. Now, even the most important proxy of Iran Hezbollah is finding less and less space in the Lebanese people’s narrative. This has been emboldened by the support the government and non-Hezbollah sympathisers are getting from Saudi Arabia, and France among other countries.

France and Saudi Arabia coming together & the Lebanon question

No one expected Lebanon to be reinstated on the Saudi agenda, or for Riyadh to display a readiness to aid the country in its current state. The meeting between French President Emmanuel Macron and Saudi Crown Prince Mohammed bin Salman in early December, however, marked a watershed moment in Lebanon’s shaky relations with Riyadh. French President Emmanuel Macron has apparently succeeded in his strategy to re-advocate for Beirut by getting Lebanon back on track with Riyadh, at least as a matter of Saudi lip-service for the time being.

Also read: After getting UAE on his side, Macron begins his Saudi Arabian adventure

The Saudi and French leaders have agreed that the Lebanese government must implement extensive reforms, particularly to adhere to the Taif Agreement, which ensures Lebanon’s national unity and civilian peace. The agreement also said that Lebanon must not be used as a launchpad for terrorist attacks that threaten the region’s security and stability, or as a source of narcotics trafficking. And to make sure that this objective succeeds, the Iranian proxy in Lebanon, that is Hezbollah, should be taken to task.

This had an immense impact on the sections of the Lebanon government that had been shying away from criticising Hezbollah because of their overall influence and the muscle power in the country.

The government openly comes out against Hezbollah

While earlier the government in Lebanon has been sceptical of openly criticising Hezbollah, things seem to have changed quite substantially. First, it was Lebanon’s top Christian party that had indicated it is considering ending a political alliance with Iran-backed Hezbollah, threatening a fragile union that has shaped Lebanese politics for nearly 16 years.

Now it is the government itself. Prime Minister Najib Mikati voiced opposition to Hezbollah’s actions stating that it hurt the Lebanese population and its ties with its Middle Eastern allies. “We have called for adopting the policy of dissociation from Arab disputes and refraining from harming Lebanon’s ties with Arab countries, including Saudi Arabia,” Mikati said.

“What the secretary-general of Hezbollah, Sayyed Hassan Nasrallah, said about the Kingdom of Saudi Arabia tonight does not represent the stance of the Lebanese government or the broader Lebanese population. And it is not in the interest of Lebanon to harm any Arab country, especially Gulf countries,” he added.

The external support to the anti-Hezbollah factions in Lebanon was already a priority for the Arab world and especially for France and Saudi Arabia. In addition to this, Egypt is also working to provide energy security to the country as well as decrease tensions between levant neighbours Israel and Lebanon.

Now as the domestic anger has overshot the threshold point, the time of Hezbollah in Lebanon is nearing its end really fast. With this, Iran will lose its base to launch attacks in the Middle East, thus hurting Iran’s geopolitical ambitions quite substantially.